WASHINGTON, D.C. — The battle lines have been drawn in the fight over cell phone early-termination fees.

Both consumer advocates, led by Sen. Amy Klobuchar and the Federal Communications Commission, and wireless carriers, led by Verizon Wireless, are mobilizing to claim the same moral high ground — fighting for the little guy.

In early December, Klobuchar introduced a bill that would moderate high service-cancellation fees for users with smart-phones, like the BlackBerry or iPhone, who got those phones as part of a package deal with their cell phone service contract.

The FCC followed a day later with a letter to Verizon, demanding details about its recent early termination fee increase.

In a 13-page response to an FCC inquiry (complete with 64 pages of supporting exhibits), Verizon laid out its contention (PDF) that such fees actually reduce the initial costs of smart-phones, allowing poorer customers access to a technology they wouldn’t otherwise be able to afford. 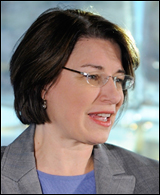 “By reducing up-front costs to consumers, this pricing lowers the barriers to consumers to obtaining mobile broadband devices,” wrote Kathleen Grillo, senior vice president for federal regulatory affairs, in the Dec. 18 letter. “It thus enables many more consumers, including those of more limited means, access to a range of exciting, state-of-the-art broadband services and capabilities. The company’s pricing structure therefore promotes the national goal of fostering the greater adoption and use of mobile broadband services.”

The early-termination fees, Verizon goes on to say, basically compensate the carrier for the cost of the phone they’re discounting when including it with a contract plan. Given that most customers choose to bundle phones with plans, rather than buy them separately, Verizon concluded that the market has little issue with the bundling.

So far, Verizon’s logic has yet to hit home with many industry watchers. New York Times technology columnist David Pogue, for one, posted two questions for Verizon on his Times blog:

• How come our monthly bills don’t drop at the end of two years, once we’ve fully paid for the phone?

• Verizon says that we, the customers, can avoid the early-cancellation penalty if we’re willing to pay the full retail price of the phone up front ($500 or whatever). Fine. But then why do we have to pay the same monthly fee as somebody who got the discounted price?

A Verizon spokesman told him its letter speaks for itself — though the letter doesn’t address either point.

Klobuchar said if Verizon is really on the side of the little guy, “they should like our bill.” Reminded that such an endorsement seems unlikely right now — given that the two sides are worlds apart on the issue — Klobuchar invited wireless providers to back her legislation “as a Christmas present to the American people.”