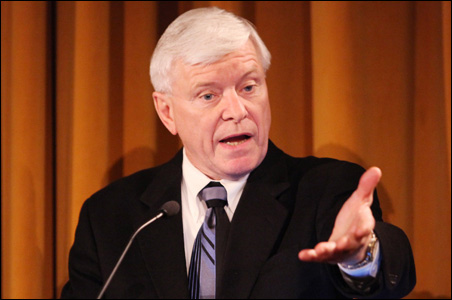 Scott Theisen, courtesy of Greater Twin Cities United Way
Former Senate Majority Leader Roger Moe: ‘The problem is we don’t talk to one another. We shout at one another.’

This isn’t something you expect to see in an age of political polarization: a conservative think-tank president praising a homeless advocate’s speech and a former DFL Senate majority leader calling the conservative a friend.

But that’s just what happened Wednesday at a Greater Twin Cities United Way leadership forum on “The New Face of the Uninsured.”

Maybe we should have expected a civil conversation. After all, United Way had billed it as a nonpartisan event. Former Senate Majority Leader Roger Moe, Center of the American Experiment President and Founder Mitch Pearlstein, and Monica Nilsson of St. Stephens Human Services were among several speakers addressing the elimination of state funding for General Assistance Medical Care (GAMC) for impoverished adults.

The compelling stories Nilsson told about her homeless clients – 28 percent of GAMC enrollees are homeless – resonated with Pearlstein. “Monica, that was terrific,” he said, explaining later: “I’m likely the only head of a conservative think tank … whose wife runs three homeless programs.”

Budget shortfall provided backdrop
News of the state’s $1.2 billion budget shortfall was only a few hours old as the three-hour forum began at the Humphrey Institute of Public Affairs in Minneapolis. The budget forecast  [PDF] included news that the Health Care Access Fund would go broke and need a $109 million infusion in 2011.

Part of the funding gap is related to the transfer of GAMC enrollees to MinnesotaCare, an insurance program for low-income residents supported by premiums and a 2 percent tax on health-care providers for the access fund. Since the mid-1970s, GAMC has been supported by general-fund dollars.

When legislators convene Feb. 4, they will have a few weeks to come up with a solution to continue health care for about 36,000 adults on GAMC without displacing working Minnesotans from MinnesotaCare. Federal health-reform proposals to expand Medicaid coverage to single adults without children – which would pick up the bulk of the state’s cost for a while – won’t take effect until at least 2013. 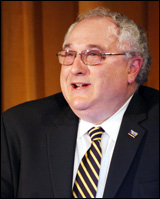 Moe prefaced his remarks with a nod to Pearlstein. “Mitch [a former speech writer for Republican Gov. Al Quie] and I go back 25 years. I consider him a friend. I didn’t always agree with him but Mitch is a friend. He approached debate in a logical, civil manner.”

Three days before the 2009 session ended, Republican Gov. Tim Pawlenty used his line-item veto power to strike $381 million in second-year funding for GAMC. Then the governor unallotted another $15 million, in effect speeding up the demise of the program to March 1, 2010.

Although the DFL-controlled Senate had enough votes to override the governor’s veto, the House of Representatives voted along party lines and the Democratic majority was unable to get three Republican votes needed to override.

“When he (Pawlenty) vetoed the bill, they (Democrats) quit talking even to me,” House Health Finance Division vice chairman Jim Abeler, R-Anoka, told MinnPost in October. 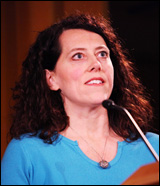 Coalitions formed to brainstorm
Since the session ended, health-care providers, advocates for the poor and others have formed coalitions to brainstorm solutions. Legislators also have been listening and gathering information.

“My understanding,” Pearlstein said, “is it never – never – was Gov. Pawlenty’s intention to abandon these people [GAMC enrollees] forever. … I think the veto was done with the full understanding that the players would get together and make things better, and I’m gathering that is precisely what is happening.”

Michael Scandrett, director of the Minnesota Safety Net Coalition, ticked off several solutions including “targeting limited resources to where the need is greatest.” Recipients could include the state’s major safety-net hospitals – Hennepin County Medical Center in Minneapolis and Regions in St. Paul. Cleaning up the complex eligibility process for Medicaid and other state insurance programs is another solution, he said.

Ramsey County Commissioner Raphael Ortega, who sits on the board of Regions, also noted the labyrinthine qualification process for Medicaid (called Medical Assistance in Minnesota). “The system is complicated, and it’s not by accident,” he said. “It’s more focused on making sure” that people who don’t need services don’t get them instead of “on those who do need them.”

Pearlstein, lamenting how politicians “brutalize” one another, touched on Al Quie’s approach to rival candidates. “When he ran for office, he would always pray for his opponent each day to have a … meaningful experience,” Pearlstein said, chuckling a little. “He said if he prayed he found it very difficult to be nasty to an opponent.”

The solution for these times? “Pray,” Pearlstein concluded, drawing some chuckles from the audience.

An approach for revisiting the issue
Moe said he wouldn’t presume to tell legislators what to do, but here’s what he would do if he were still in charge:

“I would ask some rhetorical questions. 1. Why was GAMC funding vetoed in the second year of the biennium? 2. Why, when the governor took the next step in the unallotment process, why was it March 1 and not Feb. 1? My assumption is the administration is open to a resolution” from the Legislature.

Moe said hearings need to begin in January and legislative leaders need to “figure out a first step to draw everybody together … something easy with all four caucuses.” It could be something as simple as procedure, he said. Another override attempt isn’t viable, he said, because of 2010 elections.

In the short term, he said, legislators need a quick fix and “an out” to revisit the issue in 2011 and later until there’s a “federal fix.” For now, “get it off the table – don’t let it get mixed up in 2010 politics.”

Affordable housing is key
Monica Nilsson, director of street outreach for St. Stephens, has a solution up her sleeve, too. “For $30,000 in one-time startup money, we can house and continue to support 15 long-term homeless, high-barrier households. … Alternately, tonight, one of those I work with on GAMC may take a poor man’s vacation and get drunk. We will house him for $192 a night in detox. …

“One is most likely in the emergency department at HCMC right now complaining of back pain or truthfully stating that she wants to die,” she said. “Six months of rent will be spent by the weekend to the tune of $2,800 for one episode at the hospital. … I promise you on everything that is valuable to me that if we provide affordable housing for people, they will be healthier and cheaper.” 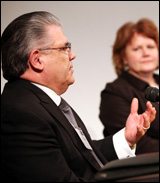 HCMC CEO Art Gonzalez, who joined the hospital this year after working in California and Texas, said the hospital has cut just about everything it can to compensate for a projected loss of $42 million in GAMC funding in 2010 and $50 million in 2011. During his career, he said he admired from afar Minnesota’s legacy of caring for the uninsured and HCMC’s role.

As the nation is focused on extending health care access, Gonzalez noted, “in Minnesota, we’re going in the other direction.”

One more tip from Moe: “This isn’t just a Hennepin County and Ramsey County issue. This is an 87-county issue. … We’re all in this together. Frame the issue as urgent and that the long-term consequences are not just to GAMC but to the social fabric of the state.”

Casey Selix, a news editor and staff writer for MinnPost.com, can be reached at cselix[at]minnpost[dot]com. Follow her on Twitter. http://twitter.com/caseyselix