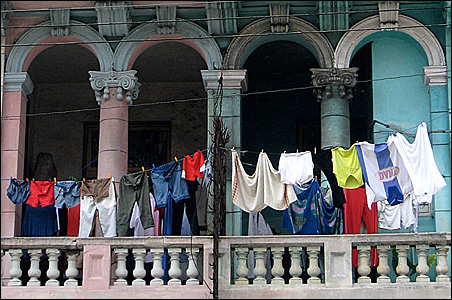 MinnPost photo by Joel Kramer
Many properties would look abandoned if not for laundry drying on lines.

HAVANA — We’ll call her Elena, to protect her from retribution from her government. I don’t know if we really need to protect her, but every time we asked her a question about her life in Cuba, she looked around to make sure no one was in earshot before answering.

Elena teaches mathematics to engineering students at the University of Havana. In most poor countries, this would make her a member of the economic elite. But this is Cuba, where for the most part the people are educated, cultured, healthy, and poor.

Elena has to moonlight as a tour guide at one of Havana’s oft-visited sites so she can earn enough to pay for food and clothing. We gave her a tip of about 10 American dollars, which is the equivalent of almost a month’s pay for a Cuban worker, even a well-educated professional.

She said she lives in a very small house, where she grew up with her grandmother. It is “her house” now, in a way — she doesn’t even have to pay any rent — but she can’t rent it out or sell it. “In Cuba,” she joked, “the only place where private property is respected is in the cemetery.”

Her daughter is studying archaeology at the university, but Elena says there is no future for the young woman in Cuba. She fears her daughter will find a way to leave, and she will be alone. Other relatives of hers have gone to the United States and Europe, “but they have forgotten me.”

One story of many
We heard so many variations of her story. Angela, a 90-year-old woman, sings and plays guitar in one of Havana’s relatively few privately owned restaurants. Her face lit up when we told her we were from the United States. While we ate another of our monotonous meals, she sang ballads from Cuba and Mexico, tossed in a heavily accented “It’s a long long way to Tipperary” and ended with “Guantanamera.” She told us that because she was from an era when women didn’t work outside the home, she never worked for the government and therefore had no pension. So, at 90, she plays and sings seven nights a week, for the tips.

Angela was pregnant when Fidel Castro took power, she said. Her son studied to be an industrial engineer, and got a job in a factory. But he found he could make as much in one night playing the guitar for tourists as he did in a month doing “his boring factory job.” So he, too, plays. 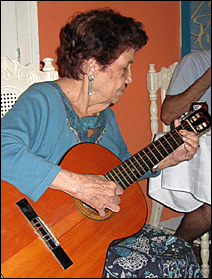 It was not like this during the first three decades of the Cuban revolution, the era when Cuba — despite its fierce desire for independence — was essentially a Soviet satellite state, selling its sugar in exchange for enough economic subsidy to provide most Cubans with a decent standard of living. This gave Cuba the space to build a socialist society based on universal access to education, health care, and a vigorous arts community, with freedom defined as the opportunity to do anything that supported the revolution and nothing that didn’t. Tourism, which had been mob-dominated under Batista, was virtually non-existent. Cubans were not allowed to own dollars.

Concessions after Soviet Union’s collapse
But after the collapse of the Soviet Union, Castro had to make some concessions to keep his people from starving in the face of the relentless American economic embargo. He re-introduced tourism, using foreign joint-venture capital to begin renovating and rebuilding infrastructure (Old Havana is now an exciting area to explore), allowed some private entrepreneurship in certain categories of small business, and permitted Cubans living abroad to start remitting hard currency to their relatives on the island. It was all done reluctantly and in a very limited way, because Castro was so ideologically opposed to capitalism. Even today, nearly two decades later — with an ailing Fidel replaced by his more pragmatic younger brother Raul — “almost everyone works for the government here,” as one security guard in a hotel told us.

Even the trickle of capitalism is setting back the revolution’s commitment to equality. Revolutionary Cuba abolished de jure racial discrimination, and blacks are certainly far better off than before the revolution. But the Cubans who are fortunate enough to be getting remittances from foreign relatives are overwhelmingly white, and they are becoming a new elite. (Some, we were told, choose not to work at all, simply living off the remittances.)

“In Miramar (a higher-class suburb), all the people you see in the nice houses and the stores are white,” said a dark-skinned cab driver. “On the other hand, I could take you to an eastern suburb where the apartments are small and ugly and the people are black.”

Baseball and dominoes
In Havana, there is none of the rushing-around-of-suits-with-cellphones that you see in more financially oriented world cities, like New York or Shanghai. From 8 a.m. to 8 p.m., large numbers of men stand in a corner of the Parque Central and argue about baseball. During a rainstorm, we dropped into a recreation center in the Centro neighborhood, and saw half a dozen men playing dominoes — a Canadian in the game, in Cuba to study Spanish, told us they play all day, every day: “Before work, after work, during work.”

Though things are better than right after the collapse of the Soviet support system, getting enough to eat is a challenge for Cubans. Some foods, like rice, are rationed, and, as the same cab driver told us, “what they call a month’s ration lasts for 10 days.” You can buy more at the market, but a pound of pork, he said, costs 28 Cuban pesos, almost 10 percent of a typical Cuban’s monthly government salary. 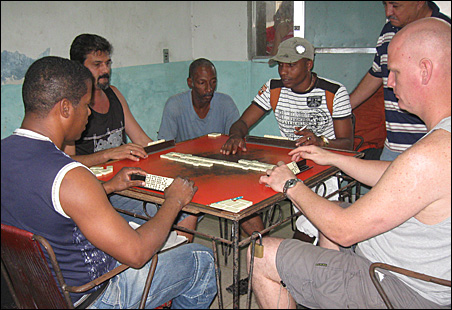 Photo by Holly Lewis
These men play dominoes ‘before work, after work, during work.’

But poverty in Cuba is different from poverty in so many underdeveloped countries.  Every few blocks, it seems, we saw schools filled with what appeared to be healthy, energetic children, and community health clinics dotted the neighborhoods. According to World Health Organization data, Cuba has lower infant mortality and a lower incidence of AIDS than the United States, and about the same life expectancy. Cuba has trained so many doctors that it exports them for humanitarian missions and trades their services to Venezuela for petroleum.

You see almost no advertising for commercial products in Cuba, but (along with billboards with political/ideological messages) you see many public-health messages, such as warnings to girls about the risks associated with teenage pregnancy. We never saw a child begging. (There were some adult panhandlers, mostly elderly people, but not as many as we see in Minneapolis.) There is a lot of prostitution, involving Cuban women with foreign men, and one way the government appears to try to limit it is by not allowing Cubans above the lobby level in major hotels.

A vibrant, sophisticated arts scene
One of the most striking ways that Cuba is not like other poor countries is its vibrant arts scene. Both artists and audiences are highly sophisticated. We were in Cuba during the Havana Film Festival, and at every theater, long lines of locals waited to get into the movies on their inexpensive passes.

Teresa Eyring, former managing director of the Children’s Theatre Company of Minneapolis and now director of the Theatre Communications Group in New York, was on our trip, and she spent the week meeting with many local artists and seeing their work.

“The place is infused with art, music, dance, painting, sculpture and theater,” Teresa told me after she made her rounds. “A distinguishing factor is the high level of sophistication of the people of Cuba. People of all ages and walks of life attend arts events. The prices are low, the work is good, and there is not so much else competing for people’s time.”

Aleigh Lewis, the filmmaker who with her husband, Sage, produced the theater/film piece that led us to Cuba for its premiere, described Cuba to us as a “meritocracy.” If you are good at what you do in the arts, you will be supported in a big way throughout your career. Some of Cuba’s best artists live in some of Cuba’s best housing, Eyring told me. “The building where Sage, Aleigh and company were staying is an artists’ high rise with sweeping views of the sea. The conductor of the orchestra lives there, and the penthouse is the home of the poet Cintio Vitier.”

Democracy seems a remote concept
So what lies ahead for this nation of highly educated, healthy, sophisticated, politically repressed, proud but poor people? Based on what we saw, it’s hard to guess how fast Cuba will change. Democracy seems like a remote concept; the Castro revolution has been very effective at applying just the needed level of repression to maintain tight control. More likely is something like the Chinese model, in which an ostensibly Communist state commits to improving its people’s standard of living, and employs foreign capital and know-how flowing through joint ventures to make it happen.

So far, of course, the capital flowing into Cuba is limited because of the decades-long U.S. economic embargo, which can make finding the simplest products a headache. Even though Castro always played up anti-Americanism to cement his position domestically, Cubans we spoke to are eager to see relations improve between their country and ours. “We are socialist and you are capitalist,” a woman bookseller in Plaza de Armas in Old Havana told me. “But we are all people, we should be friends, and we should trade.”

The dramaturg for the Lewis’ film/theater premiere, Esther Hernandez, who left Cuba for California in 2001, put it this way: “ It’s time for the old guard in both our countries to get out of the way, and let the young people create something new.”

On one level — Americans’ ability to travel to Cuba — the relaxation seems already to have begun. Under the ominously named “Trading With the Enemy Act,” it is in theory difficult for Americans to travel legally to Cuba. (Cuba is the only country currently covered by the act — North Korea was recently removed.)

You need to jump through a lot of hoops, and say different things to the authorities in the two countries (for example, the United States will approve “humanitarian” missions, but you are advised to tell the Cuban authorities that you are there for tourism). Americans must use only cash while in Cuba (American credit cards and bank cards don’t work), and not bring home any cigars or rum or anything else but artwork and publications.

This can prove to be a real burden. But the Obama administration seems to take a more relaxed view of the matter than its predecessor. When we told U.S. Customs in Miami that we had traveled to Cuba as journalists, and brought nothing home but a CD and a DVD, the official asked for no evidence of our professional work, did not check our luggage, and simply said, “Welcome home.”

Joel Kramer, editor and CEO of MinnPost, and his wife, Laurie, visited Cuba earlier this month for the premiere of a multimedia theater/film piece, “The Closest Farthest Away,” at the Havana Film Festival. Laurie edited the slide shows.

Slideshow: World premiere of ‘The Closest Farthest Away’
Slideshow: Scenes from Havana, Dec. 2009
Slideshow: Images of the Revolution