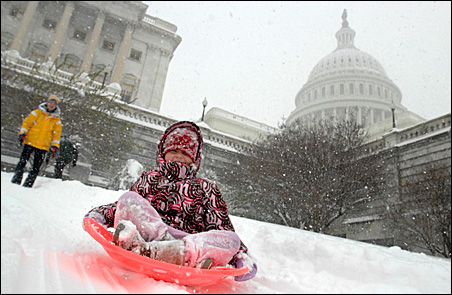 REUTERS/Jonathan Ernst
Sledders play in the snow in front of the U.S. Capitol in Washington Saturday while lawmakers worked inside on health-care legislation.

WASHINGTON, D.C. — Democrats needed all 60 members of their caucus to show up and vote this weekend on sweeping health-care legislation, and despite a record blizzard that dumped 16.4 inches of snow on the capital, that’s exactly what they got.

And while Sens. Amy Klobuchar and Al Franken didn’t get everything they wanted in the bill — you would be hard pressed to find a senator who did — they still got a lot.

“We’ve been trying to reform our health care system for close to a century. It’s been a long time coming, but this morning we’re one major step closer to getting it done,” said Franken, who proposed an amendment to control health-care administrative costs that’s still part of the package.

“Early Monday morning was an important step forward to a final vote on health care reform,” Klobuchar said. “After all the work and debate that’s gone into this over the past year, we owe the American people a vote on this issue.”

As Washington struggled with the nasty winter storm, Senate leaders avoided Democratic defections and absences and advanced the Senate’s health-care package past a crucial 1 a.m. test vote — 60-40, with no Republican support.

Probably the biggest victory for Minnesota’s senators is the rule pushed by Franken that requires 85 percent of health insurance premiums for large group plans and 80 percent for small-group and individual plans be spent on health care costs. Franken had filed an amendment asking for a 90 percent requirement across the board, though he said he’s happy with the requirement in the bill. 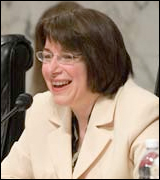 The key to that amendment is its permanence: Unlike some other provisions, this rule wouldn’t be invoked on a trial basis with an automatic sunset clause. Once it makes it into law, it’s law.

Other provisions in the bill proposed by Franken and Klobuchar: Removing annual and lifetime insurance-coverage limits, increasing health-care fraud sentencing guidelines and, perhaps biggest for Minnesota care providers, adding a so-called “value index” that aims to include quality of care as an insurance reimbursement criterion.

Tax on medical device industry
It was widely expected that the medical device industry would be taxed an additional $20 billion over 10 years — a provision also in the House bill. However, that’s down from the $38 billion in the original Senate legislation, and Klobuchar secured a one-year implementation delay.

The final version of the Senate bill also includes the so-called “EARLY Act”– a national breast-cancer awareness campaign targeting at-risk groups, a provision backed by Klobuchar. And the bill includes the expansion of a diabetes prevention program pushed by Franken.

“This final package includes many provisions that I’ve fought to include for months,” said Klobuchar in a statement when the final version was released Saturday. “The EARLY Act helps young women battling breast cancer, the Medicare fraud amendments will save billions of dollars for our taxpayers, the one-year delay in implementation of the medical device tax was important to our job-creating medical device industry, and, most importantly, the value index I authored for Medicare payments remains in the bill, as do other important cost reform measures.”

Several procedural votes remain, and they are expected to go down with the same 60-40 margin, setting up an evening showdown on Christmas Eve for the final vote on the Senate’s health-care bill.