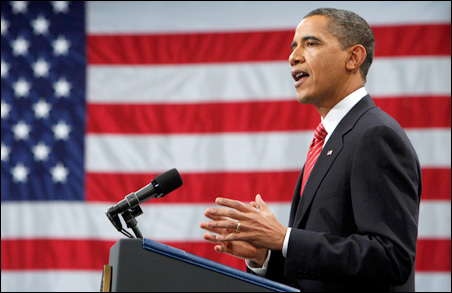 REUTERS/Jim Young
President Obama speaks to cadets during an address Tuesday at the U.S. Military Academy in West Point, N.Y.

WASHINGTON, D.C. — Usually after the president makes a major speech, lawmakers in his party rush to show their support for the thrust of the plan while reserving judgment about the details. Not so Tuesday night, when the President Obama’s plan to send another 30,000 U.S. troops to Afghanistan received a cautious reaction from Minnesota Democrats and others.

The reaction puts pressure on top national security officials to sell the deal quickly, before any requests for funds to support the move are formally made. Secretary of State Hillary Rodham Clinton, Defense Secretary Robert Gates and Adm. Mike Mullen, chairman of the Joint Chiefs of Staff, began making their arguments in favor of the Afghanistan plan to Congress in a pair of hearings today. A third hearing is planned for Thursday.

Sen. Amy Klobuchar, D-Minn., said she will be focused on those hearings and future briefings to gauge “how this strategy will prevent Afghanistan from serving as a base for terrorism, the specific resources that will be necessary to carry out this mission, and the additional costs that it will require,” adding that “our troops deserve nothing less.”

Democratic Sen. Al Franken, like Klobuchar, said he will examine the Obama plan but “will go into that examination, quite frankly, skeptical about a strategy that involves a significant increase in the number of American troops. That is in no small part because I am deeply skeptical of the Afghan government.”

Troop increase
In a prime-time speech to cadets at the U.S. Military Academy at West Point, Obama said the additional troops will go to Afghanistan beginning early next year in an effort to finally win a war begun eight years ago as a response to the Sept. 11 terrorist attacks.

“Afghanistan is not lost, but for several years it has moved backwards,” Obama said, noting momentum by the Taliban, al Qaeda safe havens along the Afghanistan-Pakistan border and continuing difficulty in securing the country. “In short: The status quo is not sustainable.”

Obama said he plans to begin withdrawing combat troops as early as summer 2011, about 18 months after the surge arrives.

Reaction to the troop increase was divided among Minnesota’s House delegation, though not along party lines. Democrats Betty McCollum and Tim Walz joined Republicans Michele Bachmann and Erik Paulsen in supporting plans for a troop increase. Keith Ellison, a Democrat who has been opposed to a troop increase in the country until corruption in the Afghan government is cleaned up, said he remains “uncomfortable with the troop increase,” while Republican John Kline said it doesn’t go far enough.

“I am concerned about the increased troop levels, but I am glad he at least has a specific plan he wants them to follow and a time limit to get them out,” Ellison said, adding that he was encouraged by the focus on building Afghanistan’s civil society.

Kline and Bachmann, however, blasted the plan to begin decreasing combat troop levels by summer 2011, with Kline saying such a timeline “sends a clear message to the Afghan people and the world that we are not committed to their safety.”

The plan
Currently, 68,000 U.S. troops are serving in Afghanistan alongside 39,000 troops from other nations. Obama’s plan calls for 30,000 more U.S. troops. White House officials expect announcements in the coming days from some allies to increase their own troop levels, though not at the level of the U.S.’ increase.

Once there, the troops would focus on securing the country, training Afghan security personnel to take over for the troops that begin leaving in 2011.

The move would be partnered with “a sizable infusion of additional civilian assistance,” White House officials said. Their goal would be to draw Afghanistan’s agricultural economy away from poppies that fuel the opium trade, while building infrastructure and shoring up fragile Afghan government institutions.

Rep. Collin Peterson, a Democrat, said he wants to hear more specifics on how the United States and its allies would get Afghan warlords and disparate factions to come together and work for peace before committing to support Obama’s plan.

“It was a fine speech in terms of generalities,” Peterson said. “I’ve got some questions on some specifics of it.”

Costs
Another of Peterson’s questions, echoed by several Democrats, was how the president planed to pay for his plans.

Obama estimated the surge would cost $30 billion this year, but did not give a cost estimate through 2011. And while he pledged to address the costs of the troop increase “openly and honestly,” conspicuously absent were details about where the money would come from.

“He didn’t say how we will pay for it,” said Rep. Jim Oberstar, a Democrat. “And because of that I will have to reserve judgment until we see what specific requests he will make of Congress and what the true cost will be to the American people.”

Much of the funding for the Afghanistan war has been given through emergency spending bills outside of the regular budget process, a process Democrats insisted must change.

McCollum, who has co-sponsored legislation to impose a one percent surtax to pay for the war effort, said after the speech that “all additional funding necessary to achieve stability in this region should not be put on America’s credit card, but paid for today.”

McCollum added: “In a time of economic crisis, borrowing billions of dollars from China to pay for war in Afghanistan actually undermines our national security. Shared sacrifice means not only committing to fight a war but also committing to pay for it.”

Derek Wallbank is MinnPost’s Washington, D.C., correspondent. He can be reached at dwallbank[at]minnpost[dot]com.