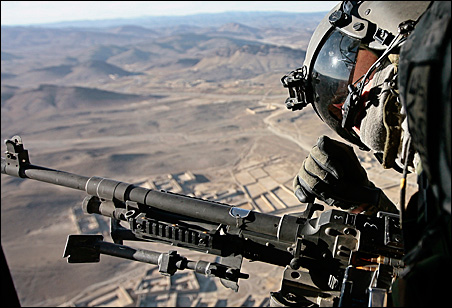 REUTERS/Zohra Bensemra
A soldier from Task Force Viper looks out as a Chinook CH-47F transport helicopter flies back to FOB Salerno, Afghanistan, on Wednesday.

President Obama’s announcement this week of his long-awaited Afghanistan strategy was not a one-night event but the kickoff for a debate that will roil through next year’s mid-term elections and on into the history books.

Very much rides on this strategy – from our security at home to the lives of our troops to the future of the war-weary Afghan people I visited while covering this eight-years-long conflict.

And the questions we have to debate are as complex as the intricately embroidered textiles I saw everywhere in Afghanistan.

Making the best of a bad situation?

Obama was stuck in a tight spot with no great options, said J. Brian Atwood, who administered the U.S. Agency for International Development before he became dean of the University of Minnesota’s Humphrey Institute.

“We’ve invested eight years in this place, and it’s not really an option for the president to turn his back despite all of the problems that we face in this country,” Atwood said.

“I’m not sure I have a lot of confidence that this strategy is going to work,” he said. “But I don’t think the president really had an option to withdraw — especially given that, while suppressed, the al Qaeda threat still exists.”

Further, the United States’ best chance for accomplishing anything in Afghanistan already has passed. A key part of Obama’s strategy is to reverse the Taliban’s momentum. Well, we did that in 2001, and the Taliban regrouped. Would success now make any more difference than it did then? Sadly, the answer is probably less of a difference.

“We had a better chance then of dealing with the problem than we do now,” said Prof. John Radsan, who directs the National Security Forum at William Mitchell College of Law in St. Paul.

“After 9/11 we stopped the momentum and did it far faster than anyone predicted,” he said.

Instead of following up in Afghanistan, though, we turned the bulk of our resources and attention to Iraq.

“We are not going to reach a point where we are 100 percent satisfied with the situation in Afghanistan,” Radsan predicted.

The best the country can expect, he said, is “to reduce the threat to an acceptable level for American security.”

Nightmares from the Soviet 1980s’ occupation of Afghanistan haunted Ghafar Lakanwal as he watched Obama outline plans to send 30,000 more troops to Afghanistan and ramp up that country’s troop strength too.

Lakanwal was Afghanistan’s minister of agriculture during the 1980s, and he also led a delegation to the U.N. General Assembly before the United States granted him political asylum in 1988. He now lives in Bloomington where he heads the MultiCultural Development Center which is working to build schools in Afghanistan.

“I was a member of the Afghanistan cabinet then, and the Soviets were always asking for more troops and more troops,” Lakanwal said. “They kept warning that the mujahedeen would take over and Afghanistan’s government would collapse.”

Today’s parallel arguments go this way: If we don’t build up forces in Afghanistan, the government in Kabul will collapse and the Taliban will take over.

But the lesson from history, Lakanwal said, is that increased troop levels lead to more fighting, more bloodshed on both sides and no long-term resolution of anything.

“We are escalating war, and war is not a solution,” Lakanwal said. “This war is not winnable.”

Obama did not outline in any detail what the additional troops will do, but his top commander in Afghanistan, Gen. Stanley McChrystal, has set goals for protecting cities and key infrastructure.

That strategy worries Lakanwal too. The Soviet’s also fought to hold urban areas, partly because the countryside was too rugged and forbidding to control.

But the majority of the Afghan people live in rural areas, and that’s where the Taliban operates, Lakanwal said.

“Really, we aren’t at all clear who our enemies are,” he said. “If we want to engage ourselves in honest political dialog with the parties involved in this conflict, we have to focus on the rural Taliban.”

The Taliban presence is woven through rural life in important parts of Afghanistan.

“The Taliban are the sons of the villagers, the cousins, the local people,” he said. “They all know each other. And that is the Taliban’s strength.”

Instead of concentrating on urban areas, American leaders should learn how to distinguish between these rural fighters, he said. Many of them care nothing about Taliban ideology. They fight because a Taliban commander ordered them or paid them to do so or else because foreign forces killed their cousins and neighbors.

The way to confront the heart of the problem, Lakanwal said, is to engage in “an honest dialog with this kind of Taliban at the local level with participation of community elders and tribal leaders, offering them economic incentives to become community builders and partners, establishing businesses and small agricultural-industrial complexes so they are involved in production in their communities.”

Even before Obama spoke, news had leaked that he planned to send another 30,000 troops to the conflict. And the debate was on: Why any increase? Why not 40,000? And so on.

None of those numbers is significant, said Thomas Hanson, a former U.S. State Department Foreign Service officer who now works with the Minnesota International Center and several other local groups interested in world affairs.

Military experts around the world calculate that troop levels of at least 400,000 would be needed to pull off a real military solution in Afghanistan.

“The United States public would not support such large numbers. Even if it did, we don’t have the troops,” Hanson said.

To further complicate Obama’s dilemma, the Afghan people wouldn’t support that level either.

“If our military footprint in Afghanistan is too large it will simply fuel opposition to us,” Hanson said. “That’s why they decided to have a brief surge, train Afghan forces quickly to take over and then begin to get out because the large footprint over time would be counterproductive.”

But then what? Given the shakiness and shadiness of the government in Kabul, that’s the key question for debate.

Obama said he was speaking to the people of Afghanistan too. But which people?

Afghanistan’s power and its allegiances are dispersed among warlords and local ethnic leaders. There are several key – and, sometimes, competing — ethnic groups the United States can’t afford to alienate.

The largest group is the Pashtuns. And Obama’s conundrum is that the Taliban draws its base almost exclusively from that group.

“In a way, we are right back to where we were in the immediate aftermath of 9/11when we tried to decide what to do about Afghanistan,” Hanson said. “The State Department and the CIA argued we should go after al Qaeda but leave the Taliban in place because the Taliban are the Pashtuns, the strongest ethnic group. And if we went after the Taliban directly we could get ourselves into a civil war we could never win, a war with the Pashtuns.” 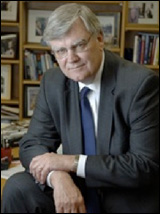 U of M
Brian Atwood: “I do believe we will be there for a long time.”

Atwood said, though, that in-depth analysis of public attitudes in Afghanistan has shown that the Taliban are unpopular even in some Pashtun areas where people “do not share their extreme ideology or religious fervor.”

By some estimates, only 10 to 20 percent of Taliban supporters would want to ally themselves with al Qaeda, and the rest are simply people who favor a conservative religious life.

Part of the puzzle is the fact that the central government also is headed by a Pashtun, President Hamid Karzai, who is very unpopular.

“The Taliban have been exploiting that,” Atwood said. “They have basically argued that their cause relates to cleaning up the country, to the corruption of the Karzai government. ..  Part of our strategy has to be pressuring the government not only to be more effective but also to decentralize.”

Isn’t the problem in Pakistan?

Obama noted in his speech that Pakistan’s army has launched its largest offensive ever against al Qaeda and the Taliban.

But Pakistani forces are chasing down their own Taliban – not Afghanistan’s Taliban. And there is a significant difference, Hanson said.

The truth is that Pakistan has no interest in seeing the current government in Kabul stabilize.

“The key reality we face is that Afghanistan is a buffer between India and Pakistan,” he said. “From the Pakistani point of view, [it was] our invasion of Afghanistan — when we brought in the Northern Alliance — that tipped Afghanistan into the Indian orbit.”

The Northern Alliance is made up of ethnic groups that are closer to India.

“Karzai has blamed Pakistan’s intelligence service for an assassination attempt against him and for the bombing of the Indian embassy in Kabul,” Hanson said. “So this is overt. Karzai has basically said ‘The Pakistanis are trying to eliminate me.'”

Obama has been sincere about promoting regional diplomacy.

“But this enmity between Pakistan and India is so deep that it’s going to be very hard to get them on the same page in Afghanistan,” Hanson said.

The strongest pushback to Obama’s speech comes in connection with his naming July, 2011, as a date for starting to draw down troops.

But exactly what does that mean?

“I do believe we will be there for a long time,” Atwood said. “McChrystal was depending on a mini surge over the next 12 months to basically push the Taliban back and pull people away from the Taliban to the point where you have relative security at least within the urban areas.”

Then for at least eight years civilian aid would be brought in and U.S. forces would play a peacekeeping role, Atwood envisioned.

“This so-called exit strategy is basically not exiting from the country but exiting from a more active counter insurgency,” he said.

Meanwhile, the time frame does give Obama a chance to work diplomatic channels, to try winning more cooperation from Pakistan, India, Iran and other countries.

“But it’s very difficult,” Hanson said. “It’s a multilayered set of challenges, and we are not giving ourselves a lot of time…  It’s a high risk strategy.”

Yet another facet of the mini-surge time frame is the pressure it places on Karzai while effectively depriving him of an excuse for failure.

“Obama may be preempting excuses from Karzai,” Radsan said. “Otherwise, if the situation got really bad, Karzai could say, ‘The Americans didn’t send enough troops.'”