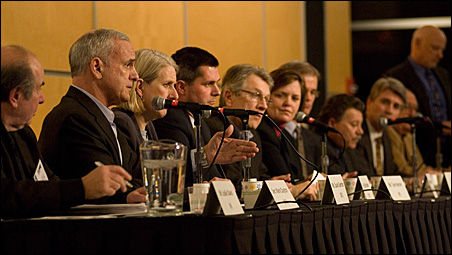 Perhaps the most remarkable thing about last night’s gubernatorial candidate forum at Macalester College was that people showed up. Here it was, cold and snowy, and still hundreds of people were on hand to listen to 11 candidates talk about their views on transportation, land use and the environment.

This was a liberal crowd — the forum was sponsored by such organizations as Sierra Club, MPIRG, faith-based ISAIAH and Transit for Livable Communities.

That pretty much explains why the two major Republican candidates, Marty Seifert and Tom Emmer, didn’t bother attending. (The one Republican on the dais was environmentalist Leslie Davis, who is preaching an anti-tax message and who these days is wearing a tie. But it’s unlikely that the Republicans ever will endorse a guy who’s been busted for such things as chaining himself to trees and who doesn’t own a car.)

It was, however, a crowd filled with people who are likely to show up at precinct caucuses next week, which made it somewhat surprising that such DFL candidates as Tom Bakk, Paul Thissen, Matt Entenza and Steve Kelley didn’t attend.

General agreement on issues, differing enthusiasm levels
There were no great surprises in the forum. The DFL candidates all came out in favor of better transit, better roads, bike paths, walking paths, smarter growth.

The Independence Party candidates — there were three on hand — apparently support those things, too, but not with so much enthusiasm as the DFLers.

In fact, when DFLers started talking excitedly about more effective land use laws, one of the IP candidates, Rob Hahn, was greeted with stone cold silence when he said, “I personally hate sprawl. But I have a hard problem telling someone you can’t sell your land if someone else wants to buy it.”

Much of the evening was predictable.

As always, it was Rep. Tom Rukavina, the feisty Iron Ranger, who got the laughs and lots of nods of agreement with his comments. For example, he managed to tie his belief in higher taxes on the rich to the Vikings’ loss on Sunday.

“Twelve men in the huddle,” muttered Rukavina of one of the final blunders that cost the Vikings a trip to the Super Bowl. “These millionaires [the players] can afford to pay a little more taxes.”

The people in attendance laughed, proving that even left-leaning, tree-hugging, bike-riding Minnesotans are still smarting over the Vikes’ performance.

Dayton strikes a chord
As always, former Sen. Mark Dayton got positive feedback with his stands. On this night, Dayton not only called for taxing the rich, which is his standard line, but also took some brutal shots at the Minnesota Pollution Control Agency.

“It should be called the Minnesota Pollution Cooperation Agency,” said Dayton scornfully.

Minneapolis Mayor R.T. Rybak and Sen. John Marty both were clearly popular with the crowd.

But the most telling moment of the night may have involved a little showdown between House Speaker Margaret Anderson Kelliher and the person who most likely will be the IP’s candidate next November, Tom Horner, who described himself as “a reformed Republican.”

Horner didn’t expect to wow this crowd, but he’s looking to make connections wherever he can.

His oft-repeated message last night was that Minnesota needs a governor who can bring diverse groups together.

“There are a lot of people with great ideas in Minnesota,” he said. “What we need is to be able to elect a leader who can have the 400 of you here sitting down with people from the Taxpayers League and start coming up with solutions.” 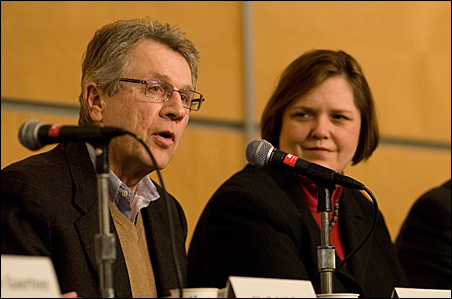 Over and over, Horner pounded on the idea of governor as the great consensus-builder. But late in the evening, he took that a step too far, at least in the eyes of Kelliher.

“Being governor is not a neutral position,” she said, anger in her voice. “People deserve to know where you stand. … There is no lack of courage at the Capitol.” She went on to say there has been a lack of leadership from the governor.

Three things were interesting about this momentary break from forum normality:

• Kelliher so often seems to hide her personality behind a carefully crafted message. The result is that she can come off as bland. She’s not, offering evidence of real emotion last night.

• The Independence Party forces likely will play a significant role in the November elections. They’ll try to sell what Horner was selling. That a “neutral” governor can move Minnesota away from the party-line bickering that has become the norm.

• This little moment was a foreshadowing of a portion of what we’ll see in November, when both Republicans and DFLers will be trying to undercut the IP message.

Mostly, though, what the night showed is that Minnesotans remain interested and involved. On a cold and snowy night, they went to a forum.

Horner was trudging through the snow and wind, en route to his car at the end of the evening.