As Tuesday’s caucuses draw near, stakes, passions and suspicions are increasing among those running for governor.

Nowhere was that more true than around the gubernatorial campaign of Minneapolis Mayor R.T. Rybak, who today received the support of Duluth Mayor Don Ness and two members of the Duluth City Council while also fighting off the notion that he’s “anti-widow.”

Those endorsements matter mightily to Rybak, who many pundits believed would have trouble finding support outside the metro area.

“People are underestimating how well he’s known outside the city,” said Rybak’s campaign manager, Tina Smith. “It’s interesting. Where we hear the most skepticism about his chances are from people inside the city. They say, ‘You’re one of us — do you really think people from outside will support you?’ ”

Smith said that the campaign will be releasing longer lists of those in Greater Minnesota who will be supporting the Rybak campaign in coming days.

The letter, signed by five widows of police officers and firefighters who died on duty, blasts Rybak for cutting their pensions.

Before getting into the details of the widows’ charges, dig through a bit of the politics surrounding the letter. 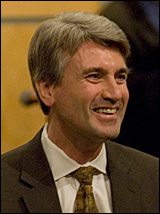 According to Smith, the Rybak campaign started receiving concerned calls from DFLers around the state a few days ago.

“People are saying, ‘I can’t believe this is true,’ ” she said. “They’re wondering what is true. Some are saying they won’t let this letter shake their belief in R.T., and others are wondering if R.T. has a skeleton in his closet.”

Statewide queries raising suspicions
But as intriguing as the questions being raised, said Smith, is the fact those queries are coming from all over the state, and they’re coming from people who have participated in caucuses in the past.

That means that the firefighters and police had very sophisticated mailing lists to work with; lists that sound suspiciously like the lists that the state DFL would have.

Said Smith, “I am really sure that the DFL is not responsible for this. I trust the DFL. I don’t believe they’ve illegally given their lists to outside organizations. But it does appear to be a list of past caucus attendees, and it’s not just from a certain part of the state. Where could a list like that come from?

“Somebody said, ‘There are old copies of lists here and there. Maybe that’s what this was.’ I suppose that’s possible. But I’ve got to say this is a pretty significant list. It would take a lot of wherewithal and money to deal with a mailing like this.”

DFL Party Chair Brian Melendez told the Star Tribune, “I am absolutely certain they [the fire and police relief associations] do not have our voter file. If they do have access, that’s not legal.”

Second internal spat among DFL candidates
This is the second time in two months that the DFL Party has been in the middle of spats involving the field of its gubernatorial candidates. Last month, House Speaker Margaret Anderson Kelliher drew the ire of several competitors over earmarked party contributions. That matter has since been largely resolved.

The charges stem from a longstanding pension dispute between the city and the Fire Relief Association and Police Relief Association that were closed to new employees in 1980. Since then, it should be noted, police and firefighters are served by a statewide pension fund.

After months of failed negotiations, the city filed suit against the two associations, claiming that it was overpaying benefits to the tune of nearly $50 million in the last eight years.

Judge Janet Poston ruled in favor of the city, ordering the two funds to reduce their claims that the city owed starting in 2010. The ruling saved city taxpayers millions.

It also led to a letter from five of the widows about their cuts in benefits. The letter ended with this:

“There are plenty of outstanding DFL candidates who would make a great Governor. R.T. Rybak is not one of them. We hope you cast your vote on the Governor’s preference ballot at your caucuses on Tuesday, Feb. 2nd for a true DFLer — someone other than Rybak.”

Obviously, given the targeted mailing of the widows’ letter to likely caucus attendees, the Rybak campaign was concerned.

It countered that letter with a letter from Smith.

“If Mayor Rybak hadn’t taken on the bad management of these pension funds,” Smith said in a letter to potential caucus attendees, “they would have continued to overcharge Minneapolis taxpayers. That would have meant more cuts to police, firefighters and other basic city services — and higher property taxes for everyone.”

Still unanswered: Where’d the list come from? Will there be more attacks as the caucuses draw near?