What states come to mind when you think corn, wheat and soybeans? Any list probably would include the Dakotas, Iowa, Nebraska and Kansas.

It so happens that those five states also reported the nation’s lowest unemployment rates at the end of 2009. And that’s no coincidence. While construction and manufacturing companies plunged into the Great Recession, crop farmers enjoyed high prices and bumper yields.

And they spread enough of their bounty at the local grain elevators, hardware stores and gas stations to help hold unemployment to less than half the levels suffered in states that were hit by auto-industry retrenchment and the burst of the housing bubble.

With its diverse economy, Minnesota fared better than the nation as a whole throughout much of 2009. At year’s end, its unemployment rate was 7.4 percent, the 13th lowest in the nation, according to new data from the U.S. Bureau of Labor Statistics.

To look at the county breakdown for Minnesota (below) is to believe that agriculture helped keep the state’s jobless rate from spiking higher. The rate was 5 percent or lower for most counties along the state’s western border — where crop farming is an economic mainstay — during November, the most recent month for which county rates are available.

Spurring jobs off the farm
It’s not that farmers hire many workers. Standard employment statistics the government reports from month to month are measures of the nonfarm labor market. But farmers do buy billions of dollars worth of goods each year. They also spur jobs for the people who haul, store and process their grain and soybeans.

Looking ahead, economists at the Federal Reserve Bank of Minneapolis predicted that agriculture will aid recovery in their six-state region this year along with gains in manufacturing, a modest improvement in consumer spending and improved conditions in the residential real-estate market. Those sectors will have to work against a drag coming from slow construction and stubbornly weak labor markets, said the analysis from economists Rob Grunewald and Tobias Madden. 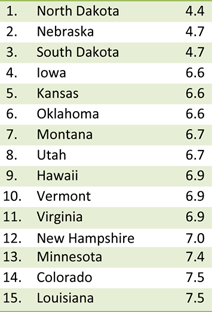 The picture was not evenly bright last year for all farmers, though. Those who serve up meat, milk and other animal products were squeezed between lower prices for what they sold and higher prices for everything from feed to fuel. Their lot should improve next year because prices for cattle, hogs and dairy are rebounding while their high feed costs should ease, the economists at the Federal Reserve said.

No bubble, no burst
There were other reasons Midwestern farm states didn’t feel as much pain as the rest of the nation. Economists and extension agents told me throughout last year that most farm towns hadn’t seen a housing bubble and therefore didn’t feel any burst.

Northwestern Minnesota’s economy certainly felt the recession, but it “was fairly insulated from the woes in the metro area such as the crash of the building boom,” said Art Nash Jr. of the University of Minnesota Extension Service in Crookston. 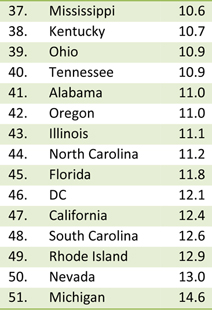 Further south in Minnesota’s farm country, Kurt Thompson — who works out of Montevideo as loan officer for the Southwest Initiative Foundation — said “we just did not see huge increases in our housing values over the past six to seven years like the Twin Cities and the regional centers.”

Nationwide, blame auto, construction — even gambling
Of course, agriculture alone doesn’t fully explain the reasons workers in so many states still can’t find jobs. Michigan’s woes need no explanation beyond the shrunken auto industry. Nevada had bet too big on construction; and it lost in its casinos, too, when an epidemic of austerity infected the rest of the country. California is one of the nation’s leading farm states. But even that agricultural powerhouse was no match for the big bang of California’s housing bubble.

Sharon Schmickle covers a variety of subjects for MinnPost, including science, foreign affairs and Greater Minnesota.