Longtime Republican state legislator Ron Erhardt is gearing up for a comeback, this time as a DFLer.

Erhardt, who for 18 years represented Edina as a moderate Republican in the Minnesota House, wrote to DFL activists over the weekend to say that he intends to seek DFL endorsement at the party’s March district convention.

The move means that Erhardt, a man in the middle, has moved across the party spectrum. For years, he was an automatic winner as a Republican. But when the party moved to the right, he was ousted within his own party, which bestowed endorsement on Keith Downey in 2008.

The final straw within Republican ranks also came in 2008, when Erhardt joined five other Republicans (the “Gang of Six”) in overriding Gov. Tim Pawlenty’s veto of a transportation bill that increased the state’s gasoline tax.

So, in an attempt to keep his office, Erhardt ran as an independent in the 2008 election. Downey won the three-way race with 36.7 percent of the vote (Erhardt had amassed 60 percent when winning in 2006). Erhardt finished second with 31.9 percent of the vote, and the DFL’s endorsed candidate, Kevin Staunton, came in third with 31.3 percent. 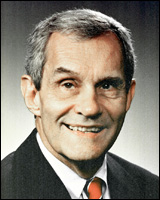 In an interview with MinnPost today, Erhardt admitted that he hasn’t been wildly embraced by at least some DFL activists in Edina, who appear to favor Staunton.

“I went to a meeting [of activists] last week,” Erhardt said. “I told them that I’ve been supporting many of their issues for a long time and I’m not afraid to raise taxes if we have to. And we probably do. I also told them I don’t think you can win with a conventional DFL candidate. I said this wasn’t a contest between Kevin and I. I said it’s about who is the best candidate to beat the incumbent. But this was a hard-core group. They were pretty silent.”

Erhardt is convinced that Downey does not represent most Edina Republicans.

“I think we have a guy who is out of whack with the district,” he said. “He’s born again. He’s anti-choice. He’s anti-gay. He’s for [school] vouchers. He’s whatever else fits in that hard-right category.”

But all of that support irritated the most conservative Republicans in the district.

“They [the conservatives] were after me for years,” said Erhardt. “Then [in 2008] they all came out of the weeds. When I looked around [at the people at the Republican endorsing convention] I said to myself, ‘This is trouble.’ ”

After losing endorsement, Erhardt announced that he would run as a moderate independent, though he eventually gained the endorsement of the Independence Party.

If he can’t win endorsement from DFLers, he said he likely won’t run in a DFL primary.

“The only people who vote in primaries come from the fringes,” he said.

But if he fails to gain DFL endorsement, Erhardt said he might again try to regain his seat as an independent.

Erhardt, who won nine elections for the House, said he’s spoken personally with Staunton about dropping out of the race.

“I tried to explain that in a three-way race he can’t win, and in a two-way, he probably can’t win, either,” Erhardt said. “If I got DFL support and hold onto the ticket splitters, I would win.”

Staunton, he said, did not seem moved by Erhardt’s math.