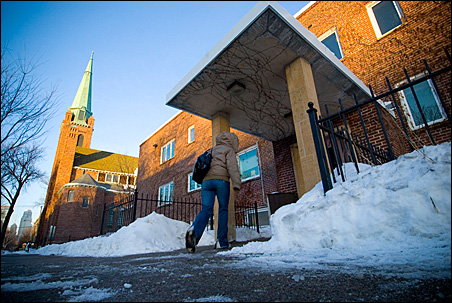 This is shaping up to be a “Valley Forge winter” for the homeless and those trying to help them, as the recession continues and leads to more foreclosures and more lost jobs.

“It’s really tough out there; the shelters systems are full and some of the tools we’ve used to help have gone away, so we have to be creative to get through the winter,” he said.

This is expected to be a tough year as government continues to cut services for the very poor, who are most likely to be homeless, and already strapped donors and foundations are being asked to dig deeper to help.

An estimated 7,000 to 8,000 people statewide need housing help each year, and while many suffer from mental illness or addiction and fit the common profile of the homeless, half are actually families or unaccompanied young people.

Twin Cities shelters are full at night, and churches in Minneapolis and St. Paul open their basements on a rotating basis to handle those still out in the cold.

Beckman said 250 to 300 people will sleep outdoors on any given night. And that’s just in downtown Minneapolis and the close-in neighborhoods.

Families living in outbuildings
There’s homelessness beyond the cities, too.

In Greater Minnesota, officials report finding families living in outbuildings on farms, because there’s nowhere else to go.

One woman in a small northern Minnesota town discovered that the laundromat door didn’t completely latch, and slipped inside at night to sleep on a bench next to the dryers. She lived there for five weeks before the owner found out.

Liz Kuoppala, executive director of the Minnesota Coalition for the Homeless, said officials in Aitkin plan to start a board of housing and have heard about people living in cars, vans and fish houses.

“Sometimes we see people who are panhandling, and it seems obvious that they are homeless, but we see a lot of people working in retail and other low-paying jobs and we never realize that some of them don’t have a place to sleep, either,” Kuoppala said.

Many problems; some success
Elimination last spring of the General Assistance Medical Care (GAMC) program for Minnesotans earning less than $8,000 a year (and thus, very likely to be homeless) will be a major blow to this vulnerable population.

GAMC and other programs that serve the poor are victims of the state’s own budget program. State funding for homeless shelters has been cut in half, and $7 million in funding for programs designed to help single people move from shelters to low-income housing has been eliminated.

But there has been more money to help homeless families this year, thanks to a portion of the federal stimulus programs, Beckmen said.

While there was a 25 percent increase in the number of families showing up at county shelters over the past year, the average time they spent there actually decreased, he said, thanks to that funding spurt and other programs. But the stimulus funding is temporary, while the underlying problems aren’t.

Foreclosures’ effects
Kuoppala notes that the rising rates of single-family home foreclosures haven’t yet had a large impact on homelessness because home-owning families tend to have a support system of family or friends who also own homes.

“So we see people moving into basements or fitting in somewhere in these other homes,” she said. “In many cases, they think it will be just a couple weeks until they’re back on their feet and able to move back out on their own, but that’s now turning into a year, or more, and at some point they won’t be able to stay any longer.”

A bigger problem comes when landlords are foreclosed upon and their renters are forced out, she said.

“Their families and friends tend to be renters, too, and there are no basements to move into.”

Help before the crisis
A major effort for homeless advocates is helping people before they’re forced out of their homes.

“Obviously, we’re rather not have people become homeless at all,” Beckman said. “Our goal is to intervene before that, and offer some assistance that will help them stay in their home.”

There is a cost to that, he said, but it’s a much smaller cost to the family — and to the community — than if they have to go through the eviction process and start over in the search for a new, affordable place.

“If we can find families ahead of time — before they’re evicted from foreclosed rental units — and can relocate them to other apartments and maybe subsidize them for a couple months, it’s going to cost maybe $500 or $600, rather than the $5,000 or more it costs the community to help them after they’ve become homeless.”

And agencies are trying to intervene in other areas, too, working with people on the streets to improve job skills and life skills. But funding cuts have hurt those efforts.

“It’s not wise to warehouse people in shelters,” Kuoppala said. “The best practice is for trained case workers who know the system to help people move up and out of poverty and homelessness. Many agencies are using more volunteers to off-set the funding cutbacks, but while volunteers have big hearts, they’re not trained to navigate the bureaucracy.”

Session solutions?
When the legislative session begins next month, advocates for the homeless will be in St. Paul working to stave off any further cuts in direct homeless funding as well as safety-net programs that help keep people off the streets.

But with another $4 billion state budget deficit facing the governor and legislators, many worry that there will be pressure to make further cuts on programs from those who need the most help.

Part of government’s role is to help those most vulnerable, Kuoppala said. “Even if there aren’t more cuts to direct funding for the homeless, if there are decreases in safety-net programs and health and human services programs — even cuts to local government aid — the homeless will be affected.”

“The governor talks about how the state has to operate like a family — making cuts to the budget when times are tough,” she said.

“I grew up in a family of 10 kids and when times got bad, we didn’t throw Grandma out on the street. We did some belt-tightening, sure, but my parents went out and got second and third jobs, to bring more money in for the family. And the kids were responsible for getting jobs to buy their own clothes. Raising revenue is part of what Minnesota families do in tough times.”

“Our message is: Poor people bore the brunt of the cuts last year. Let’s share the sacrifice more equally and not target the extremely impoverished people in the community. They’ve done their share.”

And in the St. Stephen’s annual report, Beckmen summarizes why he and other advocates continue the uphill fight:

“Homelessness remains an outrageous and ugly reality in our community and is a symptom of broken bonds and broken commitments in our civic, political, and family lives. This brokenness has led to our neighbors — babies and children, people who were once college students and teachers or who built houses or highways or fought our wars — living and dying on our streets.”

Joe Kimball writes about politics, St. Paul and other topics.

This article was written in partnership with GiveMN.org, for which MinnPost provides monthly articles on various aspects of philanthropy in Minnesota.

How you can help
Liz Kuoppala, executive director of the Minnesota Coalition for the Homeless, offers these ideas for helping in the effort to end homelessness:

• Learn the name of a homeless person

• Give of yourself; volunteer at a shelter

• Give money, either to the coalition or to a shelter program

• Charity is not enough; sign up for info and action alerts by emailing this address.

• Keep learning about the issue

• Stay current on issues with the coalition’s Facebook page

Kuoppala also suggests carrying a pack of men’s white cotton tube socks for panhandlers at exit ramps. “There’s nothing so miserable as wet feet when you’re outside all day,” she said. “And women take the men’s socks too — thicker than women’s.”

And she notes that homeless folks say their No. 1 need is hope, so be generous with smiles and warm greetings to everyone. “It’s not always so obvious who is homeless and who is housed.”

Contributions to Minnesota nonprofits can be made online via GiveMN.org.