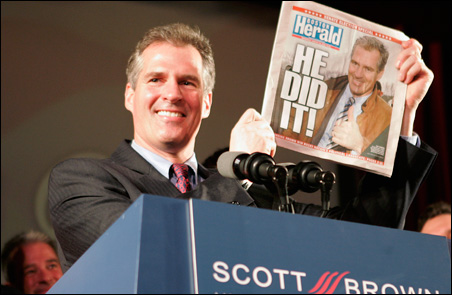 REUTERS/Adam Hunger
Republican U.S. Senator-elect Scott Brown holds up a copy of the Boston Herald announcing his victory on Tuesday.

WASHINGTON, D.C. — Sen. Al Franken is advocating using the Golden Rule when confronted with the sticky issue of when to seat Massachusetts Republican Scott Brown: Do unto others as you would have them do unto you.

Some conservatives fear Democrats might seek to delay Brown’s seating until late February or early March in order to pass health care reform before the 41st vote against it arrives in the Senate. The person currently holding that seat, Democrat Paul Kirk, was appointed to replace the late Sen. Ted Kennedy. Kirk is seen as a guaranteed vote for health care reform legislation, but his term expires as soon as Brown is certified as the winner.

Yet despite the fact that he waited eight months and three days after Election Day to be sworn in, Franken wants Brown seated as soon as he’s officially certified the winner in Massachusetts.

“Sen. Franken has every expectation that Brown will be seated as soon as the proper paperwork is filed, and he plans to continue keeping his focus on representing the people of Minnesota,” Franken spokeswoman Jess McIntosh said.

Of course, there is a precedent for lengthy delays in seating a senator. Minnesota had just one senator for the first half of 2009, while recounts and subsequent court cases between Franken and former Sen. Norm Coleman, a Republican, dragged on. While Franken was ultimately seated on July 7, some Republicans, like Texas Sen. John Cornyn, were willing to see the seat stay vacant for “years” until all potential legal challenges were exhausted.

With polls tightening in the days leading up to the election, both parties had girded up for a protracted Franken-Colmanesque legal fight — with Democrats sending Franken recount lawyer Marc Elias to lead their possible fight — though such a battle seems unlikely given that Coakley conceded and that the margin between her and Brown isn’t close enough to trigger an automatic recount.

Under Massachusetts law, cities and towns must wait 10 days for absentee and overseas ballots before certifying their own results. Working at breakneck speed, it’s possible Brown could be sworn in as early as Jan. 29, though the Boston Globe estimated that Feb. 3 is a more likely date.