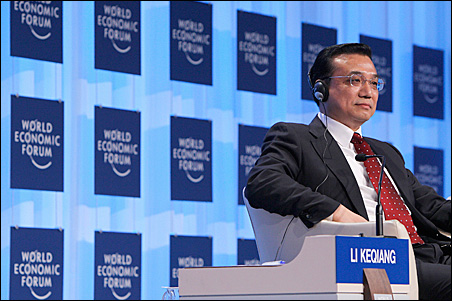 President Obama mentioned China only twice during his State of the Union address this week: First, he said, “There’s no reason Europe or China should have the fastest trains, or the new factories that manufacture clean energy products.” Later, he said, “China is not waiting to revamp its economy.”

But China looms as a great economic wall over almost everything Obama emphasized in his summation of America’s pressing challenges — especially in the emphasis on jobs and the nation’s ailing economy, retired U.S. diplomat Tom Hanson told a crowd in Minneapolis on the night before Obama’s address.

“We’ve had twin booms in the past 30 years: the Chinese export boom, and the United States consumer boom,” Hanson said in the Minnesota International Center’s annual foreign policy outlook lecture at the University of Minnesota’s Humphrey Institute.

“It is more clear today than it was a year ago that this is really coming to an end,” Hanson said.

Losing the lead
Hanson is not alone in observing that the United States is in danger of losing — indeed, may already have lost — its position as economic leader of the world. 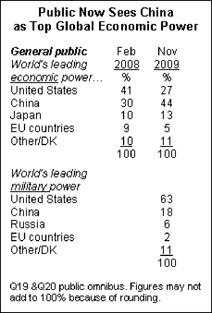 In a poll reported in December, just 27 percent of Americans said the United States is the world’s top economic power. China now holds that position, said 44 percent of those polled by the Pew Research Center for the People & the Press.

That was a reversal from February, 2008, when 41 percent of those polled named the United States as the top economic power, and just 30 percent named China.

Further, 41 percent in the December poll said the United States plays a less important and powerful role as a world leader today than it did 10 years ago, the highest percentage ever in a Pew Research survey.

The poll reveals more than temporary economic angst. A fundamental shift in power and alliances is underway, Hanson said.

Deep back in history, Asia and Europe dominated the global economy. Goods, culture and even religion travelled back and forth along the Silk Road.

Keep in mind that picture of an economic world with Eurasia at its center while you recall what happened after World War II as the United States re-engaged with the rest of the world.

The picture changes: Now you see two oceans with the United States at the center, serving as the fulcrum for worldwide trade — interacting with Asia across the Pacific and Europe across the Atlantic.

Today, Eurasia is reclaiming its spot at the center, Hanson said, with China quietly rising in stature while the United States spends borrowed money and political capital on military conflicts around the world.

A new northern sea route is opening shorter waterways for shipping goods between Asia and Europe. At the same time, high-speed rail networks are connecting parts of both continents. You could think of these emerging transportation networks as a new Silk Road.

Meanwhile, the European Union and India are negotiating a free trade agreement. And China has forged a broad new trade agreement with other Asian nations.

The end of ascendancy
Hanson drew on views posed by historian Niall Ferguson of Harvard University.

“We are living through the end of 500 years of Western ascendancy,” Ferguson wrote in December in a widely circulated opinion column for the Financial Times.

Because the United States has to rely so heavily on east Asian capital to stabilize its accounts, “the decline and fall of America’s undeclared empire might therefore be due not to terrorists at the gates nor to the rogue regimes that sponsor them, but to a fiscal crisis at home,” Ferguson wrote.

The eureka moment of the past decade, he said, was the realization that U.S. deficits were increasingly being financed by Asian central banks with the Chinese in the lead. Ferguson called the mutual relationship Chimerica.

I will quote Ferguson’s piece at length because it is central to Hanson’s argument and to Obama’s unspoken challenge:

“It would of course be ingenuous to assume that the next decade will not bring problems for China, too. Running a society of 1.3 billion people with the kind of authoritarian planned capitalism hitherto associated with the city-state Singapore (population 4.5m) is fraught with difficulties. But the fact remains that Asia’s latest and biggest industrial revolution scarcely paused to draw breath during the 2007-09 financial crisis.

“And what a revolution! . . . US GDP was more than eight times that of China’s at the beginning of this decade. Now it is barely four times larger — and if the projections from Jim O’Neill, Goldman Sachs’ chief economist, prove to be correct, China will overtake America as soon as 2027: in less than two decades.

“What gave the west the edge over the east over the past 500 years? My answer is six ‘killer apps’: the capitalist enterprise, the scientific method, a legal and political system based on private property rights and individual freedom, traditional imperialism, the consumer society and . . . the ‘Protestant’ ethic of work and capital accumulation as ends in themselves.

“Some of those things (numbers one and two) China has clearly replicated. Others it may be in the process of adopting with some ‘Confucian’ modifications (imperialism, consumption and the work ethic). Only number three — the Western way of law and politics — shows little sign of emerging in the one-party state that is the People’s Republic.”

Not waiting
Obama spoke to the prospect of a United States slide from the top when he warned that Washington needs to break out of its blinding political gridlock and get something done. 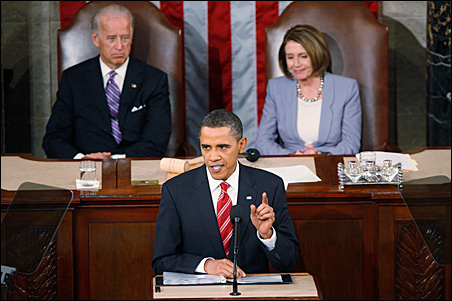 REUTERS/Molly Riley
China looms over the economic challenges President Obama emphasized in his State of the Union address Wednesday.

The applause came when he said, “Well, I do not accept second place for the United States of America. As hard as it may be, as uncomfortable and contentious as the debates may become, it’s time to get serious about fixing the problems that are hampering our growth.”

Lawrence Summers, director of the National Economic Council, has been more blunt about the unsustainability of Hanson’s twin booms (China exporting/America consuming). China can no longer behave like China because the United States intends to behave much more like China, Summers warned last year.

The question is: What nation will be the market for stepped up U.S. exports? What country will be as addicted to reckless consumption as the United States has been?

“I am beginning to conclude that the fundamental issue in the world economy– and perhaps soon for world political and foreign relations — is this: Who will replace the United States as the consumer of last resort?” Hanson said.

Without speaking to that major question, Obama said, “We need to export more of our goods. Because the more products we make and sell to other countries, the more jobs we support right here in America. So tonight, we set a new goal: We will double our exports over the next five years, an increase that will support two million jobs in America.”

To help meet the goal, Obama said he is launching a National Export Initiative that will help farmers and small businesses increase their exports, and reform export controls consistent with national security.

He added: “We have to seek new markets aggressively, just as our competitors are. If America sits on the sidelines while other nations sign trade deals, we will lose the chance to create jobs on our shores.”

China has said it too wants to move away from the “Chimerican” model, and stimulate growth in its domestic markets. But China’s leaders also are “petrified at the notion of high unemployment,” Hanson said, knowing that jobless masses make for political instability.

“It’s going to be jobs, jobs, jobs on both sides of the China-American continuum going forward,” Hanson said.

Another political reality both nations face is that protectionism looms as an ever-larger force if Americans don’t go back to work soon.

“Ten percent unemployment in the United States and 10 percent growth in China is an unstable mix,” he said.