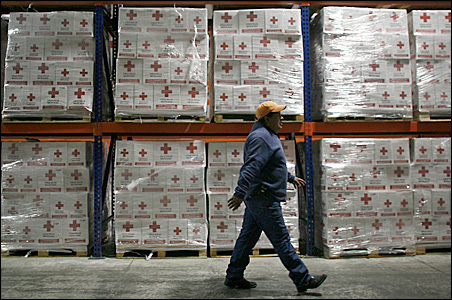 REUTERS/Eliana Aponte
A Red Cross worker walks past humanitarian aid boxes that will be sent to Haiti at the Red Cross Center in Toluca.

The full toll Haiti will pay in misery and loss will not be counted for some time. In that regard, several Minnesota-based organizations are mobilizing to help. Here are a few:

American Refugee Committee in Minneapolis has considerable experience in earthquake relief work worldwide. It deployed immediate aid and long-term recovery assistance to several Asian countries after the 2004 Indian Ocean earthquake and tsunami and to Pakistan after a large quake in 2005.

ARC said Wednesday that it had dispatched a team to Haiti, led by Monte Achenbach, who previously lived and worked in that country.

“This earthquake is devastating news from a country whose people have known more misery than can be fathomed,” Achenbach said in a statement.

Archdiocese of St. Paul and Minneapolis/Catholic Relief Services issued a call to its 217 parishes to contribute to the relief. Two of the parishes have sister-parish relationships with congregations in Haiti. Priests and many lay people from the Twin Cities area have travelled to Haiti in the past to help those congregations. One such parish and school is still standing, but many other churches were destroyed. Among those killed in the quake was Archbishop Joseph Serge Miot of Port-au-Prince.

Feed My Starving Children of Coon Rapids has long worked with other relief agencies to distribute nutritional packets of rice, soy nuggets, vitamins and vegetables to kids in Haiti’s slums. Its website says it delivered more than 25 million meals to Haiti in 2008 and again in 2009. Now it has a million meals on the ground in Haiti, another million en route and plans to send millions more.

Healing Haiti in White Bear Lake has been building schools, delivering clean water and providing other support for Haitian villages since 2006.

Cash needed
Haiti’s needs will be staggering for months and years to come. For the next few days, though, getting food, medicine and other aid to the places where it is most urgently needed may be difficult to impossible.

The American Red Cross said late Wednesday that it was “only deploying volunteers specially trained to manage international emergency operations,” given the logistical difficulties and chaos in the country.

The Red Cross and other leading aid organizations said the best way for people around the world to help at this point is to donate cash and to give it to reputable organizations with a proven record of international disaster relief work.

Be careful, though. The FBI warned on Wednesday that we should be wary of appeals for money, especially on the Internet.

“Past tragedies and natural disasters have prompted individuals with criminal intent to solicit contributions purportedly for a charitable organization and/or a good cause,” said the FBI’s warning.

You can check out some charities on the website of the Better Business Bureau of Minnesota & North Dakota. And here are some established organizations: