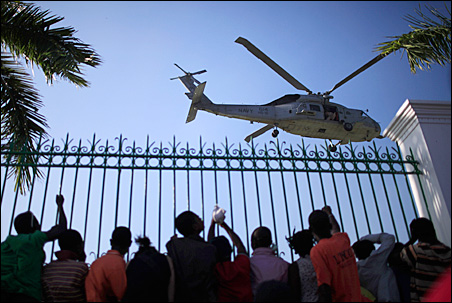 REUTERS/Carlos Barria
Crowds watch as a Sea Hawk helicopter with soldiers from the 82nd Airborne lands today near the damaged Presidential Palace in Port-au-Prince.

The Minneapolis-based American Refugee Committee was one of Minnesota’s first aid organizations to dispatch help for earthquake-ravaged Haiti. Corporations, school kids, yoga classes and many individuals are contributing to the international humanitarian group’s mission.

ARC President and CEO Daniel Wordsworth and Public Affairs Manager Therese Gales talked with MinnPost about how it is going.

MP: Where is your team?

DW: We discovered that there is a clinic in La Descubierta being run by a married couple with links to the Mayo Clinic [Dr. Dale Betterton and Dorothy Davison].) They had an influx of over 2,000 people displaced by the earthquake, a number of those seriously injured, and they were basically overwhelmed.

MP: What are you doing there?

DW: We saw this as an opportunity to go in there quickly and provide our expertise on camp management and looking after displaced people. … Also, our aim is to provide them with medical support — with equipment, medical supplies and, perhaps, volunteer doctors.

DW: We are identifying local organizations and small clinics that are providing services to injured people and to people who have lost their homes. We are setting up our own logistic channel so we can provide things like shelter materials, jerrycans, water purifiers and basic equipment. Also, from Minnesota, we are gathering a whole range of medical supplies and equipment that we can ship to clinics.

MP: Port-au-Prince has been terribly chaotic. Can you get into positions where you can be effective?

DW: There is a very big question mark about how to distribute relief supplies. …  Wherever you locate your delivery point, thousands of people begin to gather. … Right now there are about 10,000 people camped around the former presidential palace. That’s not an ideal location from a water point of view — infrastructure, sanitation. Other people are just gathered around any roads and clearings they can find. If you begin providing food to those people in those places, you make those temporary shelters into permanent locations.

MP: Is there a way around that problem? 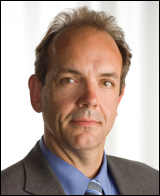 DW: The thinking is that aid agencies can find open areas on the outskirts of the city where they can provide water, sanitation and more healthy conditions. You could set up camps. … And in the process, you help move people into safer zones. Because of the delays, people are very concerned about looting. So the question is how to provide this in an orderly, safe way — not just safe for those delivering the goods, but more importantly so that people aren’t trampled in riots, etc.

MP: What about safety for your own workers?

DW: Our security person is flying into Haiti as we speak. Meanwhile, what our team has done in Port-au-Prince is set up a tent on the U.N. compound. So they are, in a sense, under the protection of the community there. But this is a concern for us.

MP: ARC aided survivors of the 2004 Indian Ocean tsunami too. That was a coastal disaster, so interior roads and other infrastructure were pretty much intact, right?

DW: Yes — although in Sri Lanka all of the roads are coastal. But part of what happened with the tsunami is that the water actually pushed debris off roads. What you have in Haiti is roads full of debris. So it’s very hard to move around. People are clearing the debris, but you also have populations afraid of going back into buildings so they are gathering on clearings and roads, on the median strips. That’s another obstruction to movement.

MP: Also, the rule of law and central government functions were stronger in tsunami-stricken countries like Thailand. Haiti, by contrast, was struggling to maintain order. That must complicate this relief effort.

DW: Yes. But I’m in no way being critical of the Haitian government and their response, given that the earthquake was near the capital city. In Thailand, it wasn’t Bangkok. … It wasn’t Jakarta in Indonesia. It was in more remote rural areas, so you didn’t have a fundamental disruption to the seat of government. In Haiti, the presidential palace collapsed. The U.N. building collapsed. Where this earthquake occurred it actually broke the seat of government.

MP: How long do you expect to stay in Haiti?

DW: Probably two to three years. We don’t just go in and do a short-term program. Typically we will be involved in relief and then we will look at the rebuilding process for communities that have lost their schools and homes and clinics.

MP: Minnesota gave ARC tremendous support in the aftermath of the 2004 tsunami. School classes, Scout troops and other groups pitched in to raise money. Are you seeing anything comparable this time?

TG: Yes. We’ve received donations of $270,000 for Haiti from about 1,100 people. We received $125,000 from The Mosaic Company. Schools are raising funds for us. At EXPO Elementary in St. Paul, kids are going to bring in used toys and sell them to each other. They raised money for us after the tsunami in a very similar manner. A yoga center is doing a fundraiser. … A lot of people in Minnesota are struggling to make ends meet, and for them to step forward and contribute for the people in Haiti is really incredible.

We, like many organizations, have been hurting through the financial crisis. It would have been very difficult for us to have mounted this response without the people of Minnesota really coming around behind us and helping.