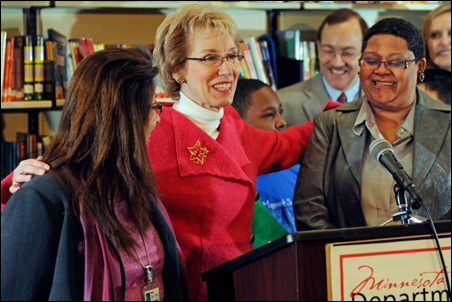 Earlier this week when the Minnesota Department of Education announced its application for a slice of the $4.3 billion in stimulus funding dedicated to education grants, Commissioner Alice Seagren portrayed support for the state’s bid as “overwhelming.”

By the time Minnesota’s application was hand-delivered to Washington, 300 school districts, 116 charter schools and 28 union locals had signed on.

However, the state’s largest teachers’ group isn’t one of them. Education Minnesota has opposed the application for a “Race to the Top” grant that it believes too closely ties teacher pay to student performance.

Such broad support, particularly from teachers’ unions, is thought to be instrumental in deciding which of the 40 state applicants get the eight grants expected to be approved. Because the schools and districts that signed onto the application represent 93 percent of the state’s students, the state was confident enough to increase the size of its request from $220 million to $330 million over four years.

“The overwhelming support we received from our schools, districts and stakeholders is a strong testament to the quality of our application,” said Alice Seagren, Minnesota commissioner of Education. “In keeping with Minnesota tradition, their support will make sure the reforms of Race to the Top are implemented to benefit the students of our state for years to come.”

What state officials didn’t note, however, is that much of that support can best be described as provisional.

State had to work fast on application
Officials had just a few weeks to put together the 1,000-page application, which had to spell out how Minnesota schools would use the money, which would be earmarked for improving teaching and data collection. That left little time for parsing the potentially explosive fine print concerning how Minnesota might reward — or punish — teachers for student performance.

Meanwhile, Race to the Top guidelines allow states and districts to opt out of the program with 30 days’ notice. So, many labor leaders and administrators signed the state’s memorandum of understanding with the idea that if Minnesota is among the winning states announced in April, they then can decide whether the trade-offs are justified.

“While this was going on, I would wake up one morning and think, ‘This is a giant intrusion,’ and then wake up another thinking, ‘This could create positive change,’ ” said Charlie Kyte, executive director of the Minnesota Association of School Administrators. “Even though you can now read the whole submission for the grant, it’s not clear what schools will have to do.”

The Minneapolis Federation of Teachers signed the state’s memorandum of understanding, said President Lynn Nordgren: “But because there really wasn’t enough time to do a thorough vetting …we said to our members and officers we are going to sign it with the option to rescind.”

“No Child Left Behind was punitive. To me, Race to the Top is trying to be innovative, not punitive,” said Nordgren. “I know there are some problems, but we can fix them.”

“Although Q Comp has partial state funding and some features that are appealing to teachers, fewer than one out of five school districts and charter schools have chosen to adopt the program voluntarily,” wrote Tom Dooher, Education Minnesota’s president.

When Q Comp was first instituted, districts that volunteered to participate were allowed to continue to include “step and lane” provisions in teachers’ contracts, along with merit pay, explained Kyte. Districts that signed on later were forced to abandon the provision, which unions see as crucial.

“Though I am aware that this is also a major emphasis in Race to the Top,” he continued, “there is no evidence that tests designed for school accountability are valid for evaluating individual teachers, and no conclusive research supporting test score ‘growth’ as a measure of teacher ‘effectiveness.’ ”

Education Minnesota is far from the only teachers’ organization that believes student test scores aren’t an accurate reflection of teacher performance.

Extra funds would go to ‘persistent’ underperformers
If Minnesota is selected, extra grant money would go to 36 schools that are “persistent underperformers.” According to Kyte, 17 of them are charters and about a half-dozen are in Minneapolis and St. Paul. The rest are on Indian reservations or in first-ring suburbs with high levels of immigration and poverty.

Most of those that did not sign on to the application are small, rural districts and charters that don’t have the kind of data-collection capability required and are too short-staffed to comply with teacher mentoring initiatives.

Both Kyte and Nordgren said they view the grant’s guidelines as “positively progressive.” Q Comp is flawed, Kyte added, but there would be time after the federal funds started flowing to take up its weaknesses at the state Legislature.

State officials already have met with teachers in Minneapolis to answer their questions about the grant’s provisions, and they plan more sessions in the next couple of weeks. Minneapolis School Board Member Pam Costain said she and other district leaders are grateful that even with contract negotiations unresolved, the union was quick to support the district’s bid for funding. If the grant is approved, the Minneapolis district would be in line for nearly $35 million.

Based on an education department briefing he participated in, Kyte described Minnesota’s application as strong. He’s optimistic, he said, even though competition is a lot stiffer than it was just a week ago, when the rigorous application process was thought to be prompting some states to drop out.

“They initially said there were 15 states applying for eight grants,” he said. “But now 40 states think they are the 15.”

Many school groups gather at starting line for Race to the Top, but loophole lets unhappy ones drop out