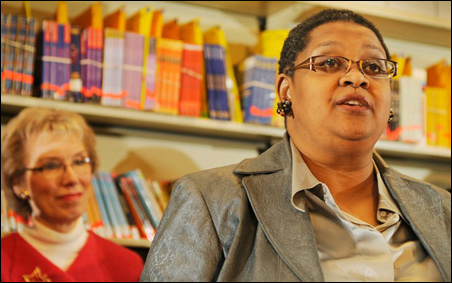 By all accounts, even district insiders were taken by surprise by the Minneapolis School Board’s announcement last night that it plans to consider a single candidate to replace outgoing Superintendent Bill Green at the end of the current school year.

Most of those in attendance for the weekly Tuesday night board meeting expected the board to announce the start of a search process.

Instead, board Chair Tom Madden announced that the only candidate under consideration is 50-year-old Deputy Superintendent Bernadeia Johnson, the district’s current chief academic officer and a Minneapolis Public Schools veteran.

“The big thing here is exponential return,” Madden told MinnPost. “We’ve got somebody who knows us, who knows our challenges, who has helped us to figure out our road map for dealing with those challenges.

Quicker return on investment
“The exponential return on that three years out is significantly higher than if we started with someone from outside,” Madden continued. “It would take them six months to get up to speed. They are going to want to have their own imprint on the plan or perhaps make their own plan, and they are going to bring in their own people who are going to need time to get up to speed, and then who in the last year of their contract would start looking for a new job. This is the most logical and the most productive solution.”

By contrast, Johnson has been one of the main architects of the wholesale restructuring begun three years ago when Green stepped in after an unpopular and now-departed board bought out the contract of its divisive choice for the job, Thandiwe Peebles.

One of Green’s first moves was to lure Johnson back to Minneapolis from Memphis, where she was serving as deputy superintendent under Carol Johnson (no relation), the last Minneapolis superintendent whose tenure in the job was widely perceived as a success.

Johnson’s academic skills are outstanding, Madden said, but it’s the vision she shares with the board that prompted the unusual decision to skip a competitive process. “I think she’s got what we need,” he said. “She’s the one who pushed for the strategic vision. She’s the one who’s pushed that the money follows the child. She’s the one who has pushed for accountability. She’s pushed the stuff that others have been pushing for 10 or 15 years.”

Outside candidates can be attractive if a change agent is what a district is seeking. But urban superintendents are hard to come by in an era of high-stakes testing and widening achievement gaps. Districts interested in national searches are often forced to rely on private firms that do most of their looking outside the public arena.

Internal candidates often have inside track
Even with the process cloaked from public view, the best candidates, particularly those already serving as superintendents elsewhere, may not apply if they think an internal candidate has the inside track. With an average tenure of about 18 months, outsiders are also quicker to move on to bigger, more financially flush districts.

Frustrated by this seeming treadmill, more districts are making the same choice as Minneapolis to forgo a costly, time-consuming search for the appointment of someone from within the ranks. Last year, in the wake of Meria Carstarphen’s decision to leave St. Paul for Austin, Texas, community members lobbied hard for a new leader who would stay. St. Paul hired a search firm and interviewed its top three choices, but ultimately appointed Valeria Silva, a classroom teacher who rose through the district’s ranks to become chief academic officer.

Last summer, when he announced he would not renew his contract, Green was quick to urge the board to consider hiring from within. Some board members grumbled privately that they felt he was trying to maneuver Johnson’s hiring.

The reforms currently under way in Minneapolis have been driven by the board, not the superintendent, as in other urban districts facing falling enrollment, widening achievement gaps and shrinking budgets. During the often-painful restructuring, board members have been quick to reject reforms proposed by staff when they did not feel the moves were bold enough or would result in lasting change. Johnson, said Madden, never needed pushing.

In recent years, Minneapolis has dealt with one budget shortfall after another by closing and consolidating programs, redrawing attendance maps and focusing resources on programs Johnson, among others, felt that research showed will yield the best results. Test scores and graduation rates have yet to show significant improvement, but African-American families, which had been leaving the district in large numbers, have begun returning.

The board has told Johnson it plans to host three community sessions where people can meet her and hear her vision before it conducts a public job interview Feb. 4. The board is scheduled to vote on her appointment Feb. 9.

Board member explains selection process
Johnson’s selection as the lone candidate may have seemed like a surprise, but it was the culmination of a process that began in July, when Green announced he wanted to return to his faculty post at Augsburg College, board member Chris Stewart told MinnPost. Board members were “knee-deep” in the controversial process of streamlining school attendance boundaries at the time but began gathering information about how other districts across the country were handling superintendent searches, he said.

At the same time, St. Paul was wrestling with its own vacancy. Leaders from the two districts were able to share information. “We had kind of a line of sight on other processes,” said Stewart.

After meeting with community leaders and parents the board decided it needed outside help. Members met with people from the Council of Great City Schools, and ultimately hired a consultant, Tom Payzant, a former long-term superintendent in San Diego and in Boston, which recently underwent its own widely lauded reform. As the process advanced, board members narrowed their focus to Johnson, said Stewart.

A native of Selma, Ala., and a former banker, Johnson taught in St. Paul schools before becoming principal at Hall Elementary in Minneapolis. She is described by colleagues and parent-activists as direct, respectful, and receptive to others’ points of view.

Hers, however, is not the kind of effusive personality displayed by Carol Johnson or by Green. The current board has worked hard to rebuild relations with Minneapolis families and district staff and may have gained enough credibility to flourish under a superintendent who is more businesslike than warm and fuzzy.

The upcoming public meetings, scheduled for Feb. 1, 2 and 3 in different parts of the city, may prove especially important considering that early reaction from parents isn’t overwhelmingly positive.

Some concerns voiced on parents’ forum
On the online Minneapolis parents’ forum, several members expressed concern that an internal appointment signaled board complacency with the status quo. Test scores have barely budged during Johnson’s time as MPS’ top academic official, one complained. Others felt the process was not transparent enough.

“It is incumbent on them to explain their rationale to an already nervous and uncomfortable parent and student community and listen to the response BEFORE making such a critical decision in a vacuum,” said one.

“Tom Madden and Chris Stewart came to the Area C meeting at Barton Open last fall and they asked us what we were looking for in a Superintendent and the selection process,” said another. “I don’t remember anyone saying ‘hire expensive outside consultants’ or ‘just hire Bernadeia and let us know how it all turns out.’ “

Stewart chuckled when asked about the complaints, recalling the shouting and name-calling that regularly brought board meetings to a standstill when he was first elected. “Typically, anything we do, you get a nice, healthy stack of e-mail,” he said. “And I haven’t gotten that.

“This conversation can’t be too much about style, it has to be more about substance,” said Stewart. “We don’t need flashy. We don’t need hand-holding by the public. We need someone who actually knows what the underpinnings of our reform should be.”