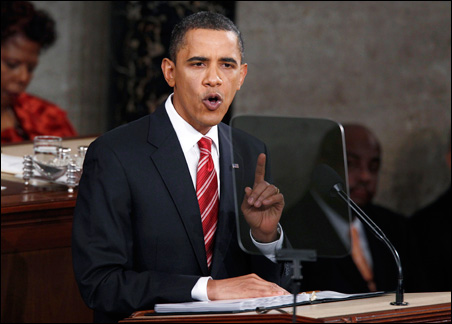 REUTERS/Jim Young
President Obama speaks to a joint session of Congress as he delivers his first State of the Union address on Wednesday.

WASHINGTON, D.C. — Rep. Collin Peterson said he decided to sit on the Republican side of the aisle for Wednesday’s State of the Union speech, the first time he’s ever done so.

“About halfway through the speech, he had those guys coming along, but then he got to health care and he lost them,” said Peterson, a Democrat.

Such was the nature of President Obama’s first State of the Union in an increasingly polarized Capitol. This is an even-numbered year, an election year, and the speech came a week and a day after the election of a Republican to Ted Kennedy’s old Senate seat in Massachusetts. Health reform seems stalled even after the House and Senate passed separate bills. A carbon cap-and-trade bill is stuck in the Senate. And while Obama has had some legislative successes, he’s had to find a way to pass his priorities with almost no Republican support.

The president is many things, but he is not a magician. And as good as his rhetorical skills are, his microphone wasn’t a wand, with which a simple arrangement of words could abracadabra Washington into some mystical post-partisan capital city.

But to judge Obama’s speech on whether he was able to single-handedly bring Republicans and Democrats on board with his agenda in more than an hour of verbiage would be a mistake, lawmakers and analysts said.

“Well a speech never would. Speeches can’t do that,” said Rep. Keith Ellison. “What speeches do is help inspire people and inform them, and they lay out a vision. Now what may happen is that Americans across this country may call their senators and say ‘Get to work, quit messing around.’

“Now, when constituents start calling you, telling you they want you to do something, that’s what makes them move, so hopefully the speech may have done that.”

Obama acknowledged as much, but said he stood resolved to continue pressing forward with an agenda fixated on spending to create jobs and overhauling what he called a “broken” health care system.

“I know it’s an election year. And after last week, it is clear that campaign fever has come even earlier than usual,” Obama said. “But we still need to govern.”

Jobs
Obama’s first and largest segment of the State of the Union focused on jobs, no surprise given that the unemployment rate is at 7.4 percent in Minnesota and 10 percent nationally — and Obama said it might be “double what it is today” had the Wall Street bank bailout not passed in late 2008. That legislation was and remains unpopular — Obama compared the measure to a root canal and joked that hatred of it is the “one thing that has unified Democrats and Republicans.”

Rep. Betty McCollum said Obama “set the tone” that people need to hear in these tough economic times, while Ellison said Obama “made it very clear that jobs are number one.”

“The President is where Minnesota wants him to be — focused like a laser on jobs,” Sen. Al Franken said in a statement. “The only way we’re going to turn this economy around is to put people to work right away.”

No doubt Minnesota’s junior senator enjoyed Obama’s focus on a wage stimulus plan for small businesses, particularly given that Franken introduced a bill to do just that earlier this week.

Franken’s isn’t the only framework that would accomplish that goal: New York Democrat Chuck Schumer and Utah Republican Orrin Hatch proposed Tuesday to suspend payroll taxes for any newly hired employee who had been unemployed for at least 60 days.

Health care
Given the focus on jobs and the economy, Obama cast his support for health care in an economic light, saying it would “relieve the burden on middle-class families” and noting a Congressional Budget Office estimate that the health care bill would lower the deficit by up to $1 trillion over the next 20 years.

“I think the message was that he didn’t want to give up, that he was moving forward,” Klobuchar said.

Obama even called for Republican lawmakers who have another plan to come forward and let him know.

Rep. Michele Bachmann tried to do just that earlier Wednesday as she and a group of House Republicans unveiled a Declaration of Health Care Independence, a 10-point platform she said should be used to frame any health care debate going forward.

“We hear you, American people. We are for having talks out in the open. We are… against kickbacks but for holding a bill in the right way, and we are FOR making sure we don’t add any more to our federal deficit,” Bachmann said.

Bachmann suggested that a bill she introduced more than a year ago could be a good first step. That legislation would allow every dollar spent on health care, be it insurance premiums, copays or what have you, to be fully tax deductible. That legislation was introduced on Jan. 14, 2009, referred to the House Ways and Means Committee and hasn’t been heard from since.

Rep. Erik Paulsen followed after the speech with his own proposal, suggesting lawmakers start by allowing people to buy health care plans across state lines, letting small businesses pool together to buy insurance and making sure that those with preexisting conditions can get coverage.

Rep. John Kline said the only next step on health care can be to “press the reset button.”

While the president didn’t lay out a strategy for getting health care reform to his desk for a signature, he did suggest that the fight isn’t over.

“This is a complex issue, and the longer it was debated, the more skeptical people became,” Obama said. “I take my share of the blame for not explaining it more clearly to the American people. And I know that with all the lobbying and horse-trading, this process left most Americans wondering what’s in it for them.

“But I also know this problem is not going away. By the time I’m finished speaking tonight, more Americans will have lost their health insurance. Millions will lose it this year. Our deficit will grow. Premiums will go up. Patients will be denied the care they need. Small business owners will continue to drop coverage altogether. I will not walk away from these Americans, and neither should the people in this chamber.”

Next steps
Among the many other points in Obama’s 7,077-word speech was a renewed call for increased investment in high-speed rail, money that could go to help construct just such a proposed link between the Twin Cities and Chicago.

“From the first railroads to the interstate highway system, our nation has always been built to compete. There’s no reason Europe or China should have the fastest trains, or the new factories that manufacture clean energy products.”

Today he begins selling that and the rest of his plans at a soon-to-be high-speed rail construction site in Tampa, Fla. Early next week he’ll head to Nashua, N.H., to continue promoting his jobs agenda.

Sandwiched in between those two trips is possibly Obama’s most important speaking engagement — he’ll head to Baltimore on Friday to speak with House Republicans during their annual caucus retreat. There he’ll hope to turn some of his opposition into case-by-case allies.

For example, the president may find an ally in Paulsen on cutting the deficit. “Good message,” said Rep. Erik Paulsen of Obama’s spending and deficit-reduction plans. “The devil is in the details, of course, but the message, I think, was appropriate.”

“Millions of Americans have lost their jobs, and one tenth of our nation’s workforce is unemployed,” he said. “Yet the Administration has shown no sign of backing away from its policies of government expansion at the expense of our nation’s job creators.”

There remains the question of what to do in the Senate, where the Democrats’ loss in Massachusetts leaves them one seat short of that ever-elusive filibuster-proof majority. As Klobuchar said after the speech, “we can’t do anything now unless it’s bipartisan.”

“Obama depends on congressional support to enact his ambitious agenda, and he acknowledged the challenges of getting his agenda through Congress in today’s highly polarized environment,” said Kathryn Pearson, a political science professor at the University of Minnesota.

“While the immediate analysis of the president’s speech will focus on whether he has regained the trust of the middle class and re-inspired his supporters, the success of his agenda — and ultimately the determinant of his support by the middle class — hinges on congressional support in the months ahead.”