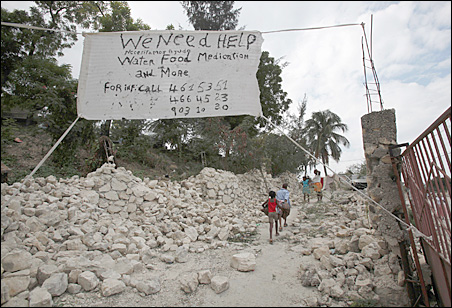 REUTERS/Wolfgang Rattay
A “We need help” sign hangs outside a destroyed slum in Port-au-Prince.

MinnPost talked by phone with Monte Achenbach, one of the relief workers in Port-au-Prince for the Minneapolis-based American Refugee Committee. Here is his update from Haiti on the situation in that country:

MP: I know the experience there must be overwhelming. Still, I’m wondering if you could share one scene that stands out in your mind as iconic for the situation in Haiti.

MA: The moment that most touched me and made me think about the incredible loss was a young man, a well-educated guy who came up to us. He had just come from burying seven members of his family by himself at the site of his demolished home. That captured it for me. It was just about everything — the loss of home, the loss of family members. And it was one person, now alone, who has to survive and go on. . . . He had a hard time looking up at me because of his incredible trauma and sadness. But at the same time you could see that he was so committed to doing what he can to help this country survive and rebuild for another day. . . . I think this is emblematic because it is a situation you could find time and again in Haiti, from family to family and community to community. He was alone in burying his family, but not alone in this experience.

MP: There have been reports that aid isn’t getting to the Haitian people as fast as it should. How do you respond to that?

MA: They are right. It isn’t getting to people as quickly as it should. The earthquake happened days ago and so many urgent needs still exist. People need sustenance, and they need it very quickly. What you see here though is a situation where the country’s infrastructure was largely demolished. . . . The port was destroyed to the extent where shipments couldn’t come in. Overland from the Dominican Republic, it’s a long route with very poor roads. The airport is in total disarray with so many people and goods needing to come in through there. And it was a very small, rudimentary airport to begin with. Take all of that on top of the massive relief that needs to come in here — tons of people, tons of supplies — and it just makes for a logistical nightmare.

MP: And the logistics in terms of the people?

MA: You have a city, a country that is just in shambles. People are camped all over the place wherever they can find an open space. . . . It isn’t just a matter of getting them enough food or water to get them through the day. We are talking about the need to sustain them over a long time because they are not going to have anything to come back to very quickly. . . . It is just mind boggling, practically unfathomable.

That’s not to let anyone off the hook. The international community, all of the actors involved in this, need to get their act together, get coordinated and figure out the best way to meet the needs. Things are getting to people in different places. But getting them all over the country and getting them out efficiently — that’s going to take time.

MP: We would like the response to be as great as the need. But the reality of such a tragedy is that there is no perfect response. Right?

MA: Exactly, and especially in a tragedy of these proportions. We are talking about a country that has no bank functioning and won’t for some time. People can’t get gas… It’s a total cash economy right now. We are talking about a place where much of the police force is destroyed and government is hardly functioning…. This is a disaster of historic proportions. And it hit probably the worst place it could hit.

MP: What are you doing there in this phase of your work?

MA: We had to pull together a team of Haitian staff. I had worked here in the ’90s, and I had former colleagues here. But I couldn’t reach any of them before I got here. I didn’t know if they were alive, if they had survived. The first one, we reached through his son’s Facebook in the United States. . . . He is alive, and he is now working with us, helping us put together a team that will respond as quickly as possible. We also have arranged to get supplies into the country.

MA: Another thing is to help local Haitian communities prepare for themselves. … They are camped in places like soccer fields. You need to work with them, to help get a roof on them somehow. You need to work together on where put latrines, how set things up to get water. You have to make decisions with them about who gets the aid first, about getting it to older people, kids, sick people and others. If you don’t do it that way — if they are not involved in identifying people that most need the aid — you get a mob situation, survival of the fittest.

Today we toured the Delmas area of Port-au-Prince with the mayor. We are working with him to figure out what are the best distribution points. Right now, things are just going to people wherever they are. But in the long run, you have to organize it in a way that you can actually sustain it over time. Then we are going to send groups that can talk with people in these communities about what they can expect so that to some extent they can figure out how best to support the distribution as a local community.

MP: I hope you are taking care of yourself too. And I thank you for taking the time to talk with those of us who are back here in Minnesota.

MA: We really appreciate the outpouring of support from Minnesota. I can’t say enough about that. As a Minnesota boy myself, I feel like I am carrying on the humanitarian tradition of our state. And it just means so much to me to see what the people of Minnesota have done. There is so much need in Haiti — a place that I love and a place where I have lived. Being able to bring the two of them together, Minnesota’s generosity and Haiti’s need, is just an incredible opportunity for me.

Helping in Haiti: A Q&A with Minnesota-based American Refugee Committee
By Sharon Schmickle
Tuesday, Jan. 19, 2010
The ARC has two teams on the ground, providing its expertise on camp management and looking after displaced people in both Port-au-Prince and La Descubierta.