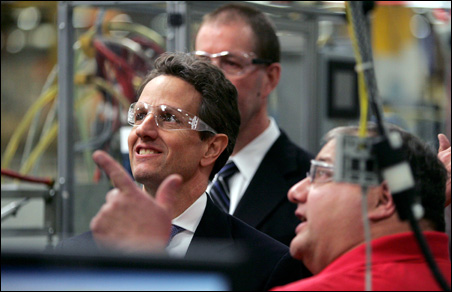 The day after taking congressional heat about his role in the AIG bailout, Treasury Secretary Tim Geithner got a friendly Twin Cities reception today. He used the visit to push President Obama’s message on economic recovery and announced a $5 billion increase in the proposed budget for “products to power the clean energy economy.”

After touring a Honeywell plant in Golden Valley with business, labor and political leaders, Geithner told the group how pleased he was to spend time with “real engineers who make things” after escaping the nation’s capital, where he’s been ensconced with “financial engineers.”

He blamed Washington for not providing “policy and reform necessary for economic growth” and cited a long list of priorities: the need to improve education, encourage exports, add R&D incentives, fix transportation infrastructure, develop a financial system to support investment in innovation, and provide “certainty and clarity around the regulatory framework” that businesses face.

For their part, the participants received Geithner’s message warmly.

Minneapolis Mayor and gubernatorial hopeful R.T. Rybak praised the administration for focusing on creating jobs when it came into office in the middle of the economic crisis. He then chided administration critics for “watching a play by play” and called on them to “get up off the couch and get things done.”

Rybak praised the roundtable participants for “coming to the table in a nonpartisan way” and said that Minnesota “is way ahead of Washington in putting people to work.”

The secretary said the economy is “beginning to heal, and we are starting to make some progress.” The job of Washington, the secretary said, “is to get better, not larger — to get smarter about creating conditions for business” to grow.

Geithner used the visit to unveil the administration’s plan to expand the Advanced Energy Manufacturing Tax Credit by $5 billion in the budget submitted to Congress  next week.

He also said the administration shortly will roll out details on several economic initiatives, including tax incentives to help small businesses and a program to use repaid bank bailout funds to help community banks ease the credit squeeze for small businesses.

The larger challenge facing the U.S. economy, Geithner said, is the “tough competitive race with countries around the world … America dominated that competition for decades, and we are going to do so in the future, but our position is eroding.”

Tom Gunkel, CEO of Minneapolis-based Mortenson Construction Co., who participated in the event, publicly credited the federal stimulus plan with “saving jobs” at his firm, particularly in its wind and solar energy construction business, which employs 1,000 of the company’s 2,400 workers.

To continue the growth of renewable-energy industries, Gunkel called for adoption of a national renewable-energy standard mandating utilities to produce a percentage of power from renewable resources. (Here’s background on Minnesota’s requirement.)

The Mortenson executive also called for investment in the interstate electrical transmission system to move wind and solar power generated in rural areas into urban centers and called for state support for the green manufacturing industry.

With $2.5 billion in revenue, Mortenson describes itself as a leading renewable-energy construction company. In recent years, it has built wind and solar plants that produce 8,200 megawatts, enough to power 2 million households, and reduce carbon emissions equaling the removal of 32 million cars from the road, Gunkel said.