Scientists assign levels of magnitude to earthquakes — a 7.0 in the case of the quake that tragically shook Haiti on Tuesday.

But that single number doesn’t give the full measure of the trauma a quake can cause on the Earth’s surface, said Professor Justin Revenaugh, a University of Minnesota geophysicist.

The depth of a quake makes a huge difference too.

“We have earthquakes that are 500 miles deep, and when it happens way down there you don’t even feel it,” Revenaugh said.

Sadly for Haiti, Tuesday’s quake was extremely close to the surface: about 6 miles underground.

“Unimaginable,” is the word Haiti’s president, René Préval, and others used again and again to describe the resulting devastation. Corpses were piled on streets. Even the president was homeless. And families had no option but to dig by hand in response to the cries of loved ones buried in rubble.

Some 3 million people, including 45,000 Americans, have been affected by the quake and “tens of thousands, we fear, are dead,” U. S. Secretary of State Hillary Rodham Clinton said Thursday, according to the Associated Press. 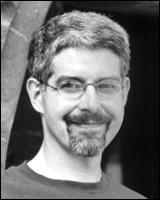 Haiti was doubly unlucky. The center of this disruption could have been anywhere along a 60-mile stretch of the Enriquillo-Plantain Garden Fault which runs on an east-west line reaching as far as Jamaica. It happened in the worst place — just a few miles southwest of the densely populated Haitian capital, Port-au-Prince.

Revenaugh explained the mighty underground forces that caused so much devastation in the already impoverished Caribbean nation:

A shifting tectonic plate, which is a massive piece of the Earth’s crust, lies just south of Hispaniola, the island Haiti shares with the Dominican Republic. That’s known as the Caribbean Plate, and it slowly slides eastward. Further north, the North American Plate moves in the opposite direction.

Stress builds up as the two plates grind along a mutual boundary. The stress can be released through small shudders or through a major earthquake.

No tsunami
Amid the chaos and fear gripping the Haitian capital Wednesday night, CNN showed live coverage of a panic that set off in a Port-au-Prince park when shouts rang out that water was coming. Fear that a tsunami would follow the quake prompted people to drop what was left of their possessions and run for their lives.

I wished there were some way to tell the terrified Haitians there was no need to panic — at least over that aspect of their terrible misfortune. Unlike the Indian Ocean earthquake on Dec. 26, 2004, this quake did not carry the threat of a major tsunami. The geophysical dynamics of the two disasters were different. 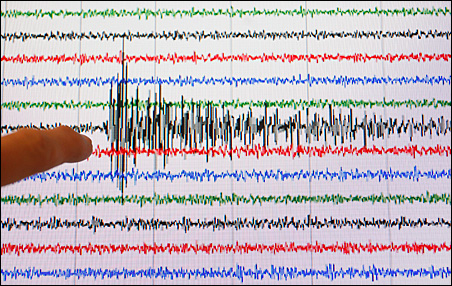 REUTERS/Vincent Kessler
Alain Hernandez, a technician at the French National Seism Survey Institute in Strasbourg, points at a graph registered Tuesday evening during the major earthquake that hit Haiti.

In the 2004 quake, a portion of one tectonic plate was forced under another, building pressure until something had to give in an upward snap. Think of a tree branch that is pushed down and then abruptly released. The rupture was so powerful it raised the ocean floor and spawned deadly tsunamis.

Instead of snapping upward, the shift under Haiti came in a horizontal, side-to-side motion. Think of setting two pieces of paper on a table and sliding them slowly past each other, Revenaugh said. Of course, anything straddling them is going to sway and possibly tumble.

There is a chance of large waves caused by an underwater landslide, but not of killer tsunamis akin to those that slammed ashore in 2004, he said.

Could have been worse
Even with the fault line so close, Haiti had not suffered a major quake in well over a century.

“In a sense it was expected,” Revenaugh said, because strain had been building on the plate boundary. But no one had predicted precisely when and where the ground would shudder with such destructive force.

This will be small comfort to Haiti given the horror unfolding on the streets of Port-au-Prince, but the damage could have been worse. The quake ruptured only a part of the fault segment that had caused a magnitude-7.5 earthquake more than 200 years ago, Science magazine reported.

And in 1751, a magnitude 8.0 earthquake — 32 times more powerful than this week’s temblor — struck farther along the same fault system off the southern shore of the Dominican Republic, where the fault dives under the island, the magazine reported.