It looks like a two-man race for governor on the GOP side. State Rep. Marty Seifert won the straw poll at last week’s GOP caucuses, and state Rep. Tom Emmer finished a strong second. I talked to Emmer before the caucuses, and I plan to do an interview with Seifert in the coming weeks as well. Here’s my q-and-a with Emmer:

MinnPost: Seifert says he has the lead. How do you plan to overcome that?

Tom Emmer: I think Marty has been the perceived frontrunner from Day One. He’s been doing this for more than a decade. What I plan to do is continue my door-to-door effort to introduce myself to voters. We detect a groundswell that is attracting new supports, many from Marty’s camp. I think we have momentum.

MP: One of the things that is emblematic of support is campaign contributions. You’re raised about $105,000 from contributors, considerably less than Seifert’s $220,000.

TE: He or she who has the most money doesn’t always win. I really don’t have a history of running statewide campaigns; the campaigns I have run I’ve done with Band-Aids and bubble gum. Marty’s been the primary fundraiser for the House Republican Caucus for three years, so I’d expect his name recognition alone would pull in money. In December, we raised more than $50,000 on an average contribution of $41. We’re catching up.

MP: You’ve been described as a “staunch conservative” and “the most conservative member of the Legislature.” What is your definition of a conservative?

TE: I have to tell you honestly that I don’t have one. I believe that government is not always the answer. What we’ve had happen in this country is that government has intruded into every area of our lives. If we are going to raise the prosperity of the nation, we have to get government out of the way.

MP: DFLers describe you as “ideological” and “divisive.” 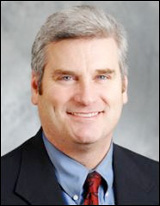 TE: Look, we could say that about our children at times because they don’t agree with us. I mean, please, if that is just an attempt to say that someone else’s point of view is somehow a problem, the reality is we are not going to agree on everything. I’m just a guy from Delano who is willing to look you in the face and tell you honestly what I believe.

MP: You’ve spent five years in the Legislature, yet you’ve cast yourself as a Capitol-outsider. Isn’t that a contradiction?

TE: I’ve heard people say, “Oh, Emmer’s been in government for 13 years” — because I’ve served on city councils and church boards. The difference is between those who want to make elective office a career and those who see it as a way of giving back. Politics absolutely will not be my career.

MP: What would you do if you weren’t in politics?

TE: My dream would be to teach and coach. I’ve coached youth hockey from 1985 till this year. That has been the most rewarding experience of my life, that and having the great blessing of being a parent.

MP: You’ve said that if you don’t win the GOP nomination you won’t continue your run for the governor’s office. Still true?

MP: What in your view are the most critical issues facing Minnesota?

TE: The No. 1 issue is how we put this state back on the path to prosperity. That’s what it’s all about. People are scared to death. They may be out of work any day, they’re having trouble paying the mortgage. They’re having trouble feeding and clothing their kids. Government has a place, but not the place it has occupied for years.

MP: What place should government have?

TE: If you go back to 1960 or ’61, government in proportion to the rest of Minnesota was much smaller. Since that time, every two years our government has grown an average of almost 22 percent. This unrestricted growth is literally sucking the atmosphere out of the private economy. It needs more and more of our working citizens’ income to feed this engine we’ve created.

MP: Where would you cut government?

TE: Welfare. It should not be in the business of providing charity, because government is not virtuous. Only people are. There are departments that outlived their usefulness.

TE: There is no reason to maintain the Department of Civil Rights and the Equal Employment Opportunities Commission at the same time. With some exceptions, they do the same things. Also, the Department of Natural Resources has grown out of out of control.

TE: We are taking “legacy” funds from the recently approved constitutional amendment and buying more land. Why? The state of Minnesota is the fourth largest landowner in the entire country! It’s staggering.

MP: Any other examples?

TE: The Minnesota Pollution Control Agency is also out of control. It has become a regulatory agency unto itself. These agencies need to be resources, not political fiefdoms that are constantly expanding their power and their payrolls.

MP: How does that affect the state’s economy?

TE: It’s my understanding that Marvin Windows opened a new production facility in North Dakota, not Minnesota, because of the permitting requirements coming, in part, from agencies like Pollution Control. That agency started as a board within the Department of Health, and it has now become a gargantuan regulatory monstrosity.

MP: The unallotment fight in St. Paul revolves around Gov. Tim Pawlenty’s authority to unilaterally cut the state budget, in this case $2.7 billion. Is this different from a line-item veto?

TE: It’s the same principle. The problem I have with the Democrats in the House is that they appear to have asked non-partisan staff, who are paid by the taxpayers, to draft an amicus brief to challenge the governor’s authority. That is a completely inexcusable breach of their authority.

MP: Why have they done that?

TE: The only reason, I believe, is to take a shot at a Republican governor. They have not proposed a solution to the budget shortfall. It’s all politics.

MP: Who has had the most influence on you politically?

TE: My parents and the instructors at St. Thomas Academy. But the two most influential persons outside of them were Ronald Reagan and Herb Brooks. To me, Brooks epitomized Minnesota. It was his ethic. His life taught me that if you do your job well, you behave in a humble manner, you give credit to the team. And if you’ve done poorly, you take responsibility for it, vow to do better, and move on with your life.