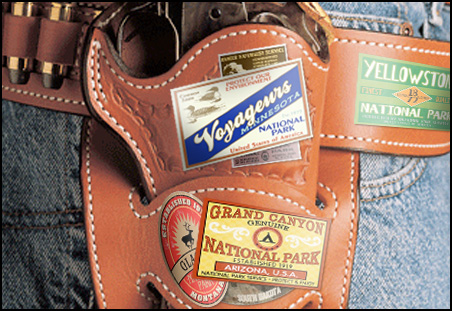 WASHINGTON, D.C. — Nestled deep in the North Woods, just south of the Canadian border, sits Voyageurs National Park. It’s an oasis of islands and streams, of lakes and land touched by time but barely by man. One could say it’s smack-dab in the middle of nowhere, if only calling a place that beautiful “nowhere” wasn’t so cruel.

Isolated, maybe, but that won’t stop Voyageurs from becoming part of the latest front in the debate over gun rights Monday, when the federal ban on firearms in the national parks is officially lifted.

Instead of a blanket ban on firearms in national parks and wildlife refuges, state regulations will reign. For Minnesotans, that means if you have a permit to carry a handgun, you can now head north and do exactly that.

Rifles and shotguns still won’t be able to be legally carried at parks in Minnesota because of existing state law, but those guns may be transported throughout the parks if the firearms are unloaded and locked away in a case or car trunk. Guns will remain forbidden in the park’s tour boats, or in facilities like the visitor centers, and hunting will still be banned.

“[Visitors] should approach it no differently than a state park where hunting is not allowed,” said Jim Hummel, chief park ranger at Voyageurs National Park.

Yeas and nays
The rule change came about when an amendment to allow guns in the parks was successfully inserted into a bill on credit card reform that, not so incidentally, was one of the Democrat-led Congress’ top legislative priorities.

The amendment didn’t pass by a little bit; it sailed through on a wide, bipartisan margin. The vote was 67 to 29 in the Senate, where Amy Klobuchar, Minnesota’s only senator at the time, voted in favor.

The vote in the House was 279 to 147, where only the state’s Twin Cities representatives, Keith Ellison and Betty McCollum, voted no.

The vote was hailed by the National Rifle Association, whose chief lobbyist, Chris W. Cox, called the new rule a “common-sense measure” to “amend out-of-date regulations and restore the Second Amendment rights of American gun owners.”

In an NRA statement at the time, the association called the new regulations as a victory for self defense.

“The National Park Service’s recent report revealed that 11 murders, 35 rapes, 61 robberies and 261 aggravated assaults occurred on parklands in 2006. Our parks also contain hidden methamphetamine labs, marijuana fields and illegal drug and illegal alien smuggling routes,” the release read. “In addition to these dangers and potential attacks from human predators, park visitors have to consider attacks from animal predators. Between April and December 2007 there were at least a dozen grizzly bear attacks reported by park visitors. Today, 31 states allow the carrying of firearms in state parks — all with safe and satisfactory results.”

The NRA is quite correct that crime exists in national parks, but it’s worth pointing out that crime rates in parks are significantly lower than in the rest of the country as a whole.

Parks are considered sanctuaries — places to just get away from it all escape the problems of everyday life, said Bill Wade, former superintendent at Shenandoah National Park and executive council chairman of the Coalition of National Park Service Retirees, which opposed the new rules.

“People are going to be more suspicious, more wary, more concerned about whether people in a campground — or in a canoe at Voyageur’s — are carrying a firearm,” Wade said.

Poaching remains a problem in the national parks, and park officials in Western states have reported incidents were people used ancient petroglyphs and other landmarks for target practice — problems, Wade said, will likely increase with more guns in the parks.

Concerns over confusion
Hummel said he doesn’t know if the law will lead to an increase in poaching or gun crimes. Instead, he’s worried about visitors being confused about what firearms they’re allowed to bring and what they can do with them once they’re there.

Voyageur’s should have some time to gradually adapt to the new rules once they take effect. About 80 percent of the park’s 230-250,000 visitors each year come during the summer months, and the park is busiest in July. Hummel said park rangers have been trained by Minnesota State Patrol officers on state laws “so that we know what they are and can apply them fairly.” A notice of the new regulations has been posted on Voyageur’s website, along with links to state gun laws and Hummel’s work phone number, just in case anyone still has questions.

The new regulations get a bit trickier for parks that cross state lines.

Firearms still can’t be carried on board the two ferries that run from Grand Portage to Isle Royale National Park, an island park located in the middle of Lake Superior, though one could conceivably transport one’s unloaded guns in a locked case, then take them out once on dry land. However, Isle Royale is technically part of Michigan (despite being closer to mainland Minnesota), so that state’s rules would apply. Similarly, the St. Croix National Scenic River touches both Wisconsin and Minnesota, so campers would need to adhere to the gun laws on whichever side of the border they happened to find themselves.

“The onus is on the people to know what state they’re in and what the laws are.” said Hummel. “Our concern is that we’ll see an increased number of people who are confused about their state laws and what they’re allowed to do.”