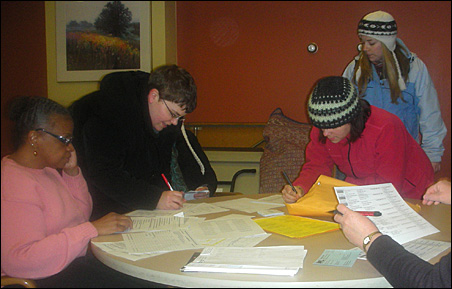 MinnPost photo by Joey Peters
Caucus-goers regrouped at the Pentagon Highrise and got to work picking delegates and offering resolutions.

Before Tuesday, I had never attended a caucus.

I came close in 2008, but thought it’d be too much of a pain to take off work. I had to lifeguard that night.

Minnesota voters are allowed take time off to caucus without getting in trouble with their employers, but I didn’t want to go through all that at the time. I also didn’t feel that bad about not going when nine out of 10 Minnesota voters weren’t going that night either. Even my former political science professor Kathryn Pearson, who’s as excited about the political process as anyone can be, wrote an editorial criticizing the presidential caucus system a few days later.

So this year I was a first-timer.

Perhaps the most telling event of the evening occurred before the caucus began. The DFL caucus I attended, which was supposed to meet at the All Nation Indian’s Church in Minneapolis, didn’t get going until 30 minutes after its scheduled start time. Nobody was in the church to let us in.

By the time caucus convener Shada Buyobe-Hammond showed up, about half a dozen of us were waiting outside. We regrouped and went to the Pentagon Highrise down the block, where we were turned away until Buyobe-Hammond recognized a resident who let us in as her guests.

We went to the Pentagon’s community room, sat down and finally got to task.

I live in Minneapolis’ Phillips neighborhood, which has a median household income of just over $27,000 a year. That’s roughly $21,000 less than the rest of the city. People of color also make up more than three-fourths of its residents.

Bouybe-Hammond says the DFL should spend more time getting the word out about political involvement in neighborhoods like Phillips, especially since so many immigrants new to the process live in Phillips.

“That’s a weakness of the party. It doesn’t put enough focus on less well-endowed communities,” she said after the meeting, pointing to how smoother meetings run in more affluent neighborhoods like Whittier. “This neighborhood has a large DFL base. Don’t take us for granted.”

Shortage of delegates
Turnout was expectedly low, especially since this fall’s election won’t have candidates for president or U.S. senator on the ballot. Just over a dozen citizens showed up at my caucus.

Things were much different two years ago when, according to a several people at last night’s event, 150 people came out. Bouybe-Hammond attributed much of that success to grassroots involvement in the Obama campaign, which had workers and supporters visiting the neighborhood in droves.

My precinct, number six in Ward 6, is big enough to allow 20 delegates to the Senate District 61 convention later this month. But since only 15 people showed up, everyone who wanted became a delegate (several people, including myself, decided not to). Maybe that’s an advantage to low turnout.

We chose our preferred candidates for governor in a nonbinding straw poll. The results: Three for John Marty, one for Tom Rukavina, three for RT Rybak and five were uncommitted.

Range of resolutions
Then came the resolutions. At DFL caucuses, attendees are allowed to present their own resolutions, which, if approved by a voice vote, move on to the party’s Resolutions Committee and are voted on at Senate district conventions and then, if approved again, at the state convention. If a resolution makes it through all these steps, it becomes part of the state party platform.

Topics ranged from recommending President Obama appoint a nonpartisan committee to investigate the abuse of overseas prisoners to having the DFL recognize corporations as potential nominees for the U.S. Supreme Court (which one person, as a tongue-in-cheek poke at the court’s controversial campaign-financing ruling last month, jokingly presented).

Other resolutions focused on providing health care to Minnesota’s children and fighting poverty. Most were uncontroversial, easy to understand and passed without difficulty. But at least half were philosophical statements with good intentions that left a lingering “How do we get there from here?” thought in the back of my mind.

Because of the late start, Bouybe-Hammond didn’t have time to get her resolutions on the table. But other than that, she, like other attendees, was mostly pleased with how the night went.

“I like to hear other people’s ideas,” she said, adding that it was nice to see the community come out and get together.