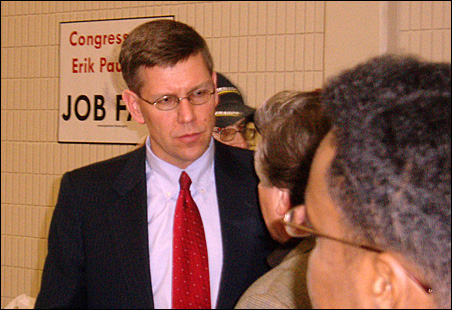 It’s not a standard leading economic indicator, but the strong turnout at Monday’s job fair, as well as the mood — at least among potential employers — seemed more hopeful than dour.

The event at Normandale Community College in Bloomington — hosted by 3rd District Congressman Erik Paulsen — drew an estimated 2,000 hopeful job seekers who braved snow and slippery roads to make the rounds of more than 40 participating companies, colleges and nonprofit organizations.

In the employment equivalent of speed-dating, job candidates queued up to meet briefly with representatives to see what each had to offer the other. Resumes, brochures, business cards and encouragement were exchanged liberally.

Bev Lohs, vice president of human resources at IWCO Direct, was seeking to hire 15 workers immediately, but she also wants to “build a platform” of potential hires for anticipated growth. Lohs was pleased both with the turnout and the quality of job seekers she was meeting. The direct-marketing fulfillment company has 1,100 employees split between Chanhassen and Little Falls operations.

Kathleen Pacini, a recruiter for Frontier Communications, had 25 openings for the company’s customer service center in Burnsville. Last year, the Connecticut-based local and long-distance telephone carrier had consolidated its call centers in Bursnville and at one other site in Florida. Despite those consolidations, Frontier had continued to hire throughout 2009, she said.

Throughout the afternoon, a constant stream of unemployed and underemployed — from young to “experienced,” from those dressed in suits and those in jeans — moved for nearly four hours among tables and banners filling the college’s gymnasium.

Many job fair participants had done their research and knew about specific job postings, while others were taking a more serendipitous approach. Some presenting companies had specific job openings, while others seemed to be trolling for resumes for the future. Area colleges, meanwhile, were touting their job training programs and career-oriented curriculum offerings.

Some employers were looking for commissioned sales people. Broker Edward Jones was offering training for financial consultants to work out of their homes, while Coldwell Banker Burnet was looking to add real estate sales consultants and marketing personnel at each of its 26 Twin Cities area offices.

The sales jobs, however, don’t appeal to everyone, said Win Ray, branch vice president at the Realtor. “Some people are looking for salaried positions. This isn’t for them.” Ray said they are adding sales associates now when the market is slow to get them trained in anticipation of an upturn, presenting “an exciting opportunity.”

The two largest employers at the Fair, Best Buy and Target, took decidedly different approaches. Best Buy did not have any banners or giveaways and was only listing a half-dozen jobs, all out of state. When asked if the Richfield-based retail giant was hiring in Minnesota, potential applicants were referred to the company website. Target was not promoting specific jobs at the fair but was collecting resumes to take back to the human resources department.

One job seeker, laid off just a week ago, queued up at Health Partners to inquire about a graphic design job she had spotted on the HMO’s website, while a neighbor in line, a nurse looking for work since last fall, just wanted to present her credentials to the health care providers at the fair.

Two job coaches from Minneapolis had brought a dozen clients enrolled in a job readiness program as part of their training. One of the coaches, Annaka Sikkink of the Employment Action Center, viewed the fair as an opportunity for the clients to get experience presenting themselves to potential employers.

St. Paul native John Gaylord spent his 51st birthday at the fair, seeking out a very specific set of potential employers where he can apply his market research and analytical skills. He lost his job a year ago but has an MBA in marketing and more than 20 years of experience in technology companies. Gaylord said the Burnsville event was better attended and offered a better roster of companies than a Monster.com job fair he attended several months ago.

Congressman Paulsen kicked off the event with a brief welcome and then spent more than an hour meeting with job fair attendees. He said the job fair idea grew out of a discussion at a constituent meeting last fall. He took it as “a good sign” that employers in the area were willing to participate and that no one turned him down.

Citing jobs as his top priority, the Republican faulted Washington for not having focused enough attention on the issue over the last year. Paulsen also said he favors efforts to free up the flow of credit to small business but does not favor the current administration proposal to reallocate funds from the earlier bank bailout, the so-called TARP funds.

He said that the credit squeeze is the result of banking regulators focusing too much attention on rescuing the largest banks, the “Too Big to Fail” philosphy. As a result, he said, regulators are applying more stringent standards when looking at lending practices for small business lending. Paulsen said the way to get banks to lend more to small business is to “get the regulators to back off.”