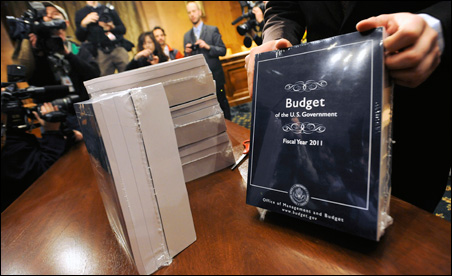 REUTERS/Jonathan Ernst
A Senate Budget Committee staff assistant stacks copies of the 2011 Budget for distribution to Senate staff on Monday.

Obama plans to direct $45 million to begin construction on the Central Corridor light rail train, money that local and federal officials say all but confirms the project will win federal approval later this year.

“The Federal Transit Administration (FTA) typically does not include funding for a new start transit project until its final design is completed,” said Rep. Jim Oberstar in a statement. “The fact that this funding was included in the budget now means that the FTA is confident all of the issues will be resolved in 2010 and the project will be ready to go in 2011.”

The $45 million, said Oberstar, is the amount the Central Corridor project will be expected to receive annually, through completion of the $957 million project. The federal dollars are designated as 50 percent match funds, and local officials said they’ve already secured funding for the other half.

“I applaud the President for including $45 million in his budget to fund the Central Corridor,” Rep. Keith Ellison said. “These funds represent a major down-payment by the federal government in making light rail line connecting Minneapolis and St. Paul a reality.”

“This is a pretty clear sign that this will be approved,” agreed Steve Dornfeld, public affairs director of the Metropolitan Council. As such, Dornfield said construction is to begin this year on preliminary projects related to the line, with a view toward the first passengers riding in 2014. “We’ve got a few little impediments in the road, but the train is moving forward,” he said.

The Central Corridor is but a drop in the $3.8 trillion budget bucket, which includes a record $655 million for education funding in Minnesota, more money for Pell Grants and an extension of tax cuts passed under the Bush administration for everyone earning less than $250,000 a year.

The increased education funding — and federal restrictions that go along with it — drew a mixed reaction from Republican Rep. John Kline, ranking member of the House Education and Labor Committee.

“While I welcome responsible investments in programs that improve educational opportunity, this Administration has demonstrated a troubling affinity for new federal mandates and intrusions in exchange for new education dollars,” Kline said.

McCollum has early role in budget hearings
The first formal budget hearings begin later today, with the first Minnesotan — 4th District Rep. Betty McCollum — officially casting her eye over the entire financial document at a 2 p.m. committee hearing. McCollum will be expected to lead Minnesota’s budgetary efforts, given that rules require the House to act first on financial bills and that she is the only Minnesotan on the Appropriations or Budget committees, which oversee the process.

Minnesota lawmakers are still poring over the budget as a whole, a process that will take at least the rest of this week, and possibly more.

Hidden deep down in the Defense budget, on page 96 of 98, is language that would prohibit Defense contracts of more than $1 million (a vast majority of them) from going to firms that required their employees to accept binding arbitration for claims of sexual or any other kind of harassment. Franken attached that amendment to the Fiscal 2010 Defense budget in December, and its inclusion in Fiscal 2011 is a sign that the administration wants the measure around for the long term.

“I’m thrilled to see that the Jamie Leigh Jones amendment, which bars government spending on defense contractors that force their employees into binding arbitration in the case of rape, assault, harassment, and discrimination, included as a part of the President’s budget,” Franken said in a statement.

Deficit and debt
However, the budget also includes a record $1.3 trillion deficit — more than $5 trillion over the next five years — which will add on to an already-huge $12 trillion national debt. As a percentage of the gross domestic product, the deficit is larger than any since World War II.

Eliminating the deficit this year, frankly, isn’t possible. Well, it is, but you’d have to eliminate all federal discretionary spending, including military, transportation and education funding. Either that, or drastically slash Social Security, Medicare or Medicaid, none of which has been seriously proposed to deal with this year’s deficit — partly because most economists believe such action would immediately throw the economy into a depression.

But running the biggest deficit in American history isn’t acceptable either to many Republicans, who blasted the Obama administration for what they called out-of-control spending.

“If President Obama were listening to the American people, he would take the budgeting of our bloated government seriously and look for options beyond more spending financed by taxes on businesses and hard working Americans,” Rep. Michele Bachmann said.

Gov. Tim Pawlenty charged in a Politico op-ed shortly before the budget was released that the government was running a Ponzi scheme, because the administration “continues to spend and promise far more than can ever be paid for by current and future revenues.”

Difficult cuts
Obama’s budget numbers are predicated on Congress passing everything he wants with no alterations whatsoever, the odds of which fall somewhere between slim and none. Should lawmakers add back in expensive programs that were cut, the deficit will balloon even more.

Consider NASA’s Constellation program, which was to return man to the moon but instead wound up stalled on the budgetary launch pad.

It’s way over budget and running behind deadline. In fact, you wouldn’t know it by the statements coming out of Florida, Texas and Alabama, but Obama actually plans to grow NASA’s budget by about 30 percent over the next five years. Former astronaut Sally Ride even called Obama’s plan to cut Constellation yet grow NASA’s budget a “significant vote of confidence in NASA and an exciting shift.”

But Constellation’s Orion crew capsule was due to launch aboard its Ares rocket from the Kennedy Space Center, the capital of Florida’s Space Coast. In all, losing it will cost the region an estimated 7,000 jobs, replacing them with fewer than 2,000 new ones.

“It’s unacceptable,” Florida Rep. Suzanne Kosmas declared of Obama’s NASA budget, while her counterpart, Sen. Bill Nelson, ominously warned that China or Russia could overtake the United States in the next space race. Sen. Richard Shelby, whose home state of Alabama houses the Marshall Spaceflight Center in Huntsville, said Obama’s budget “begins the death march for the future of U.S. human spaceflight.” Both Kosmas and Nelson are Democrats, Shelby is a Republican.

Killing the Constellation program also has big implications for a Minnesota firm, Alliant Techsystems, which has a $1.8 billion contract to develop the Ares rocket.

Cutting the deficit is a political minefield born of geography, not of ideology. It seems that one man’s Constellation is another’s Central Corridor.