Seventeen states tapped rainy day funds to help balance their budgets for this recession-racked fiscal year. And 15 other states still held enough in their funds to cover at least 5 percent of their annual spending needs.

Minnesota was not among them. Its rainy day fund was drained in 2008. And reserve funds that could cushion the state’s public institutions from fiscal disaster are unlikely to be replenished any time soon.

Just the opposite. Gov. Tim Pawlenty has pressured cities, school districts, the University of Minnesota and the 32 institutions in the Minnesota State Colleges and Universities system to draw down their own reserves in order to cover for shortfalls at the State Capital.

The latest move in that direction came last month when state officials said they would delay $423 million in K-12 aid payments to school districts. Having no reserve of its own, the state needs the cash to pay its bills. The net effect is to force many school districts to dip into their reserves too.

Here is the upshot: Minnesota faces real danger that its entire public sector — from the neighborhood schools to the state government offices — will be forced to operate for the foreseeable future with little or nothing in the way of a safety net unless state officials can find a way to turn around their fiscal wreck.

“I don’t think Minnesotans understand how serious the situation is,” said Jay Kiedrowski, who was finance commissioner under DFL Gov. Rudy Perpich and now is a senior fellow in the Public and Non-Profit Leadership Center at the University of Minnesota’s Humphrey Institute.

Top officials in the Pawlenty administration are “not solving the state problem but passing the problem on to local jurisdictions, schools and colleges,” Kiedrowski said. “This is a continuation of the financial practices that got the state into trouble.”

As school districts and colleges draw down their own reserve, they lose interest, “so it is costing them real money,” Kiedrowski said.

Nervous about credit ratings
It also puts Minnesota at risk that credit ratings for its public institutions will fall, making it more expensive to borrow money for building and maintenance projects throughout the state, said Kiedrowski and other experts.

California is forced to pay extra yields on bonds because its credit rating has fallen so low. Minnesota is not in that category. Bond rating agencies continued to give Minnesota high grades last year, partly because of the state’s broad-based economy and its record of sound management.

But this month Moody’s Investors Service lowered its ratings outlook on Minnesota to negative from stable, citing the state’s ongoing financial and economic weakness as tax revenue underperforms and liquidity tightens, the Wall Street Journal reported. The ratings agency also noted the state government’s depletion of reserves and a heavy reliance on one-time resources to balance its budget. 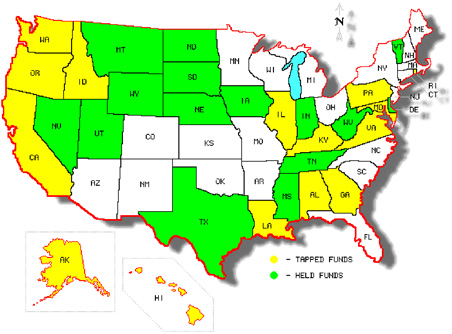 The other rating agencies are well aware that the state has no reserves and that it has been relying on one-time shifts to patch over its shortfalls, said John Gunyou, who was finance commissioner under GOP Gov. Arne Carlson and now is Minnetonka’s city manager.

“I would be nervous about keeping that rating,” Gunyou said. “It’s not just the fact that we’ve had an economic impact from the recession. All states have had that, some worse than others…. What the rating agencies look at is how do you manage that impact. Have you made the tough choices — whether that’s raising taxes or cutting spending? The bottom line is that we that have not.”

In lowering the state’s credit rating, Moody’s noted that Minnesota faces significant obstacles to achieving structural budget balance in the next budget cycle as a result of the one-time steps taken to plug gaps in the current budget.

While many other states hold enough reserve funds to cover at least 5 percent of their annual spending needs, Moody’s noted that Minnesota faces a deficit close to 15 percent of its needs in 2012-2013.

It’s definitely raining
But wait a minute. Hasn’t Minnesota used its emergency funds for precisely the reason they were created in the first place? If it’s not raining during the worst financial crisis since the Great Depression, when would it?

Legislators from both parties made that argument in 2008. So Pawlenty was not alone in showing the will to drain the funds.

“A rainy day fund is there to use, and we used it,” said Edward Foster, a University of Minnesota professor who teaches public economics.

“Now the question is whether it’s an excess of caution to say, ‘Oh my God! We’ve used it, and things may get even worse so we should do something to restore it right away!'” he said.

There are reasons to be cautious.

“A lot of families get along living hand to mouth all of the time because they don’t have any choice about it,” Foster continued. “Minnesota has now been put in that position of living hand to mouth. In the case of a family living like that, all it takes is the breakdown of the car or a sudden medical emergency and you’re out of luck. The same thing is true with the state. If new surprises come along, we’re out of luck.”

A rainy day calls for a new plan
The real problem, though, wasn’t tapping the funds when the state needed them.

The problem is what wasn’t done after they were spent, Gunyou said.

He explained by drawing a scenario that is all too familiar across America right now: The breadwinner in a family loses a job. There are savings to cover the bills for a few months. But would it make sense to sit around bickering until the savings are gone?

Everyone in our unfortunate family needs to sit down at the kitchen table and offer solutions. Mom and Dad need to bring in money ASAP — even if it’s from part-time jobs they would have seen as demeaning before this crisis. Jane may need to drop out of college for a year and get a job herself. Everyone needs to cut spending to the proverbial bone. Right now!

“A rainy day calls for a new plan and a renewed commitment to a plan,” Gunyou said.

That’s where the state’s leaders have fallen down. Not only did they fail to rally behind a new a new plan for restoring fiscal stability. They also wasted a crisis — one of those rare sobering moments that push people to cooperate and get difficult things done.

That is true even though sound ideas were in place for Minnesota to forge a new fiscal plan. Before the full brunt of the crisis hit the economy, blue ribbon commissions on budget trends and tax reform had hammered out strategies to help the state correct a fiscal course that was widely recognized as unsustainable.

One recommendation from the Budget Trends Study Commission [PDF] called for substantially increasing the rainy day fund to cushion the state against economic turbulence. Further, it said that if the budget reserve was drained steps should be taken to ensure it was replenished within four years.

That hasn’t happened. Now state leaders have no buffer against an immediate $1.2 billion shortfall and a deficit that is on track to balloon higher than $5 billion two years from now.

In the face of Pawlenty’s refusal to consider tax increases, the reform proposals “got caught up in the tax-or-no-tax argument,” Gunyou said.

“We can’t talk about the reform because it becomes so politically sensitive,” he said. “That is the greatest lost opportunity.”

Can’t talk and reason together
To build on our example of the family in hard times, the government “family” is woefully dysfunctional, said Foster, the economics professor.

“It’s like the family is going through a divorce and also having to face these financial problems,” he said. “The couple can’t talk to each other and reason together.”

To be sure, many legislators are “looking at the fiscal abyss and saying this is really a serious problem and we are not going to get out of it easily,” Foster said.

“But you’ve got these games going on between political parties that make scoring political points as important as actually solving the problem,” he said.

At this point, the problem is so monstrous that it’s hard to see how anyone could steer the government toward even a balanced budget, let alone a surplus that could begin to replenish the rainy day fund.

Don’t be fooled by politicians who say we just need to tighten our belts and end government waste. Demand that they do the math for you.

Pawlenty has said he is going to protect veterans’ benefits and public safety programs from budget cuts. The state has to pay debts already in place. It’s hard to see Minnesota accepting drastic cuts in K-12 education. Those programs add up to about half the state’s budget, Gunyou said.

Another big chunk goes for health and human services, largely to pay for long-term care for the elderly — also difficult to cut.

If those politically sacred programs are shielded, then the projected shortfall must come from everything else. To understand what that means, consider that the government still wouldn’t wipe out the long-term deficit if it eliminated all state funding for the Minnesota Zoo, the Science Museum of Minnesota, the Pollution Control Agency and the departments of agriculture, commerce and natural resources.

Alternatively, it could raise taxes — a lot.

Such are the options when the rainy day fund is gone.

‘That will save us’
Other states are trying to wrestle themselves out of the same fiscal trap — some with more success than others.

Even while lawmakers in New Mexico struggle with a shortfall of several hundred million dollars, they have crafted a budget that “would claw back more than $130 million in state money to beef up the state’s reserves, or rainy-day fund,” the New Mexico Independent reported.

California voters soundly defeated a proposition last year that would have extended temporary increases in sales, income and vehicle taxes in order to rebuild the state’s rainy day fund. Republican Gov. Arnold Schwarzenegger isn’t giving up, though. He hammers repeatedly on the need for the fund. In a speech in San Jose last month, he called for budget reform, including a rainy day fund capable of covering 12.5 percent of the state’s expenditures.

“That will save us so we don’t have to make those enormous cuts in education or in higher education, or have to worry about in-home supportive services and so on and worry about our vulnerable citizens,” Schwarzenegger said.

Minnesota’s rainy day fund is drained, and now we’re in a budget storm