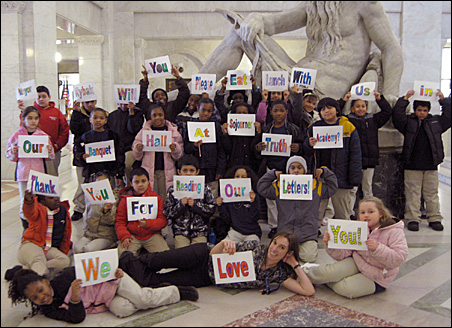 When she went to work at Sojourner Truth Academy last fall, Mary-Eileen Gallagher was assigned to monitor the lunchroom. Lunch at the north Minneapolis charter school was just 20 minutes long, but the screaming, the crying, and most especially the airborne food made it feel endless.

“I wanted the kids to stop throwing food,” recalled Ms. G, as the kids quickly dubbed her.

Her own mother used to quell mealtime chaos with etiquette drills, “just in case the president of the United States ever invited us to the White House for dinner.”

From this recollection, inspiration struck. Ms. G found some pictures of the White House dining rooms and proposed to her 260 rowdy charges that they turn the lunchroom into a banquet hall and invite President Obama to lunch there. While they waited for the president to reply to their invitation, they could practice the kind of manners they’d need for the occasion.

At the school on a year-long assignment from the Lutheran Volunteer Corps, Ms. G got busy tricking out the basement room with a chandelier, candles, sconces and faux White House window treatments for the walls. The kids got busy writing letters to Obama.

Busy being the key word: Since Dec. 1, the Sojourner Truth student body has written more than 2,500 letters to the president, describing their school, their lunchroom — and their take on affairs of the state both large and small. Each letter closed with an invitation to lunch.

“I set the expectations very high, and they are meeting and exceeding them,” said Ms. G.

A letter from the White House
In early February, the unimaginable happened: Obama wrote back. The letters weren’t particularly personalized, nor did they commit the commander in chief to a lunch date, but they spurred the wee correspondents on.

More than 90 percent of Sojourner Truth’s students come from impoverished households, and 99 percent are African American or Latino. To them, even the slender chance the nation’s first black president might visit was galvanizing. They began writing to other public officials.

Yesterday, 25 participants in Ms. G’s “White House to our House” campaign took lunch — and impeccable manners — to Minneapolis’ City Hall, where they delivered a thick stack of letters to Mayor R.T. Rybak.

While they waited for His Honor to join them, the kids imagined Obama reading their letters.

“He’s the president,” said Ricardo, who is in the sixth grade. “He probably sits at a table bigger than this one with his family and he probably has lots of security and different kinds of spoons and forks and knives and they’re serving him and he says ‘please’ and ‘thank you’ and then goes to his office and reads some letters and makes some phone calls.”

Third-grader Samiya is also pretty sure the letters end up in the president’s office, but suspects his staff actually reads them to him.

Third-grader Diego has written 25 letters to Obama, but confided that 20 are still sitting in his desk.

‘Can I tell you a secret?’
Lunch had been tidily disposed of when Rybak joined the party and took questions. The visitors got right to the point: What’s the secret to success in life?

By way of reply, the mayor asked everyone in the room to close their eyes and clear their minds. Next, he asked them to envision themselves doing the one thing they really want to do with their lives, something no one else could ever do better. Do this every night, Rybak advised.

“Can I tell you a secret?” the mayor asked. “When I was just a little older than you I did this and I wanted to be mayor of Minneapolis.”

Finally, Rybak suggested that a firm handshake and good eye contact were important when greeting important lunch guests — or asking for votes — and had the kids line up and try. 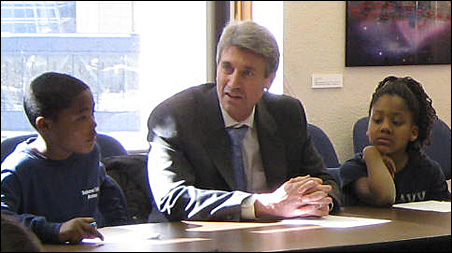 Even if Obama is a no-show, the mayor won’t be Sojourner Truth’s last VIP. Minneapolis City Council President Barb Johnson and council member Don Samuels have made plans to lunch in Ms. G’s White House on the Plains.

In the meantime, the school is raising money to send one or more lucky students to Washington, D.C., in April, to deliver still more letters. A raffle to be held in March will determine who gets to tour the original White House.

And the one in Minneapolis? Some days are better than others, but food no longer flies through the air and pleases and thank yous are routine.

“Every day it gets better,” Ms. G reported. “I wanted it to be safe and fun for everyone, so every kid can come down and have lunch and feel good about each other.”

She got more than that. “This has really brought the whole school together,” she said.