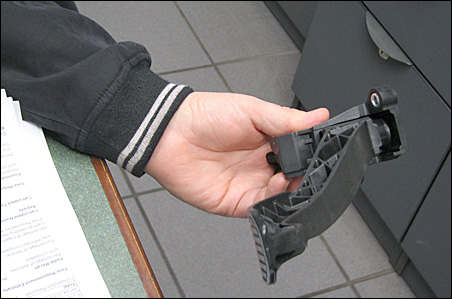 MinnPost photo by Joe Kimball
A Maplewood Toyota service manager holds the pedal piece that is being removed so a metal shim can be inserted.

My wife wouldn’t drive my car and she said our teenager couldn’t, either. And then my refereeing partner wasn’t sure he wanted to ride with me to our games.

So I took it in today for the gas pedal recall.

Although the problem with sticking pedals is rare, millions of Toyotas nationwide are being recalled and I figured it would take some time to get an appointment. But when I called Maplewood Toyota Wednesday afternoon, I was offered a  next-day, 7 a.m. appointment. Should take 45 minutes, they said.

When I pulled into the dealership at 6:59 a.m., there were eight cars in line waiting to get into the service garage. Going to take longer than 45 minutes, I thought. But then I noticed there was only one other Camry in the queue and most of the others were older cars, not affected by the recall. Oil changes or tires, probably. And four minutes later, I was in the garage and handing over the keys.

Less than 30 minutes later — barely time for a complimentary donut and cup of coffee, and before I could finish a short MinnPost story I’d started — they called my name and said it was ready. The service tech said I was good to go, and that a little shim, half the size of a postage stamp, had been installed in the gas pedal to resolve the problem.

I stopped to talk with Service Manager Russ Bestler, who said the dealership has eight to 10 mechanics assigned to work on the recall, and that they’re adding extra hours, including Sundays, from 10 to 4, to deal with the recall. He expects to work on 7,500 cars.

He pulled out a sample gas pedal and said they’re pulling the pedals out of the cars, measuring an opening, and then installing the tiny metal shim.

At 7:37 a.m. I retrieved my car, freshly washed, and safely drove five miles home, never once accelerating over 50 mph., intentionally or unintentionally.

But now, what’s this they’re saying about a problem with the electronic throttle control system?

My Camry should be safe now, right?