WASHINGTON, D.C. — There are no roads at the South Pole, a foreboding landscape of snow and ice where normal off-road tires just don’t work. Instead, Antarctic researchers use Mattracks, a conversion system that replaces tires with all-terrain rubber tracks that increase traction and spread out the weight of the trucks they propel and allow them to run on snow, sand or in marshlands.

Mattracks are made by a firm of the same name in Karlstad, a small town in northwest Minnesota near the Canadian and North Dakota borders, and then shipped to more than 50 countries and all seven continents. In 2000, exports accounted for 15 percent of sales, now exports make up a majority of their business.

“This is the first time in history that we’re having a government-wide export promotion strategy directed by the president and run at a cabinet level,” Commerce Secretary Gary Locke said, adding that the task force would meet for the first time within the “next few weeks.”

“It’s very doable actually,” said Dean Gorder, general manager of Mattracks, Inc. “If part of that deal is to get trade barriers reduced, that would be a great help.”

Innovative style in Minnesota
Achieving that goal will require Minnesota to double its exporting efforts — which are already on an upward trend. Minnesota exports grew by 50 percent over the past five years. 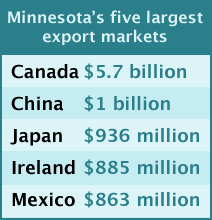 Minnesota’s export growth is a testament to “the innovative style of Minnesota companies like 3M, like Cargill,” said Doug Loon, vice president of regional affairs for the U.S. Chamber of Commerce based at their Midwest office in Eden Prairie.

“From what we see talking to businesses around the state, and our understanding of economic recovery, we think increasing exports is really critical,” Bill Blazar, senior vice president of the Minnesota Chamber of Commerce.

Blazar said the two biggest keys to increasing exports are to continue innovating, and lowering the cost of doing business in the United States.

Gorder pointed out an additional impediment — trade barriers to market entry in foreign countries. Thanks to distribution costs and 35 percent tariffs, a Mattracks conversion system for a Ford F-250 that retails for $35,000 in Minnesota could cost up to $70,000 in Brazil, a cost increase that Gorder said makes international growth more difficult.

“To double exports in five years, they’re going to have to stop using trade as a bargaining chip in other fights,” Gorder said.

Source: Department of Commerce. Figures from 2008

Sen. Amy Klobuchar will have a large role to play in shaping the future of exports, as she chairs the Senate Commerce Subcommittee on Competitiveness, Innovation and Export Promotion. In October, she held a subcommittee meeting at which Mattracks was held up as an example of a successful American small business in the global marketplace.

“Exporting is literally a world of opportunity,” Klobuchar said then. “Over 95 percent of the world’s customers are located outside the United States. Increasing our exports will mean more business, more jobs and more growth for the American economy.”