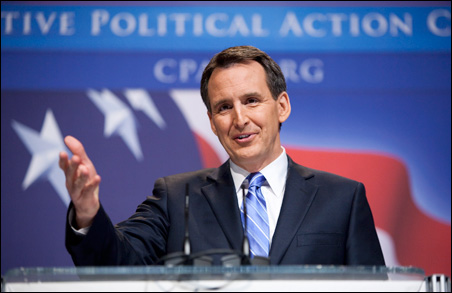 WASHINGTON, D.C. — This was a stump speech for Gov. Tim Pawlenty, a broad blueprint of how he’d lead the country, and intended to introduce himself to conservative activists and plant a firm foot on the national stage.

No, he didn’t get the rapturous applause that Rep. Michele Bachmann received when she spoke some two-and-a-half hours later. But activists at the American Conservative Union Foundations annual Conservative Political Action Conference (CPAC) seemed to eat up the red meat the governor dished out.

The center of Pawlenty’s address was his four-principle guide for conservatives (and, implicitly, any administration he might one day run):

1. God is in charge, a position Pawlenty conceded might not be politically correct, but was good enough for the Founding Fathers and should be good enough for each and every one of us.

2. We can’t spend more than we have, a point which he’s talked at length (and received some pushback) on before.

3. People spend their money differently when it’s their money, a point he used when talking about his health care ideas.

4. Bullies prey on weakness. Pawlenty said his message for President Obama on this was: “Mr. President, no more apology tours, and no more giving Miranda rights to terrorists in our country.”

9 iron and government
One of Pawlenty’s biggest applause lines came when he advised the conservative activists listening to take a piece of advice from Tiger Woods wife, Elin Nordegren, who he said had “had enough” with her husband’s philandering.

“I think we should take a page out of her playbook, and take a 9 iron and smash a window out of big government in this country,” Pawlenty said.

The initial response from the Democratic National Committee came on Twitter from spokesman Frank Benenati: “TEAPaw takes a 9 iron to his own credibility at CPAC. Now called TEAPaw for pandering to radical right wing.”

Pawlenty said in an interview after his speech that his goal was simply to put his ideas on the table and better introduce himself to Americans.

“For me, most people across the country still don’t know who I am,” Pawlenty said, “so I’m trying to provide a little information about my background, what I believe, some of my accomplishments, and hopefully give them some ideas or some energy that they can carry forward to help us win some elections in 2010 as conservatives.”

So was he successful?

“Well, that’s not for me to decide,” Pawlenty replied.

Kevin Horne, 18 of Williamsport, Pa., and Ian McArdle, 21 of Baltimore, Md., looked to me like Pawlenty’s target audience. They were among a group of young men who carried glossy photos of Pawlenty, that they had printed at a local Wal-Mart, ready for him to sign (he eventually signed a few). Both said they were big Pawlenty fans, both listened intently to his speech, but neither walked away sold on Pawlenty as the Republican nominee in 2012.

McArdle said he’s between Pawlenty or Mitt Romney as his presidential favorite, while Horne said he’s leaning toward Romney, but likes Pawlenty in a different role than perhaps he’s aiming for.

“He looks like the next vice president, perhaps,” said Horne.