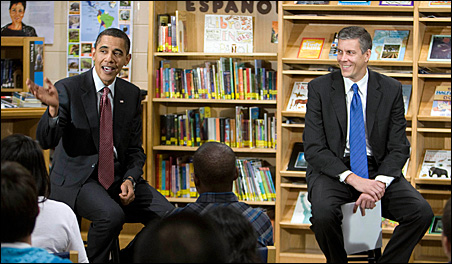 WASHINGTON, D.C. — It might be easier for everyone concerned if Minnesota employed Sherlock Holmes to decipher the clues contained in the federal Race to the Top funding rubric. He’d sift through the Department of Education’s guidelines and tell everyone how “elementary” the criterion of “Ensuring equitable distribution of effective teachers and principals” was.

As is, the amateur detectives at the state level are left to guess as to how effective their solutions, designed to address those nebulous goals, will be perceived by the judges — with literally hundreds of millions of dollars to gain for those who guess correctly — and lost for those who don’t.

“The details aren’t going to come from us, the details are in the state plans,” Duncan said. “There’s three things we’re looking at — real courage, a commitment to these things and a capacity to get real results.”

Minnesota plan to get $330 million in federal Race to the Top [PDF] funds is buoyed by support from 300 school districts and 116 charter schools that the state Department of Education says represents more than 93 percent of Minnesota students.

That number may be higher than the number that would actually participate if Minnesota won. School districts and participating charters were encouraged to opt in early to the state’s bid, with the understanding that they could back out later if they don’t like the terms of the federal funding.

“Once you see what’s required to do and how much money comes along with it, then you can make a decision, and I think that’s what a lot of people are looking at right now,” said Charles Kyte, executive director of the Minnesota Association of School Administrators, which represents district superintendents and cabinet-level administrators.

Of course, that all may be moot unless those judging the Race to the Top applications see enough courage, commitment and capacity in Minnesota’s 260-page grant application.

Duncan said the finalists will be made known in March, when administrators from those states are brought to Washington for interviews before a final decision is made and announced in April.

Successor to No Child Left Behind
Say what you will about No Child Left Behind, and many have, the signature education reform of the George W. Bush administration left little question about what was expected from school districts. Students were expected to score at a certain level on standardized tests.

If enough students scored at or above grade level, your school passed. If not, they failed — simple as that. Fail enough times and your school or district could be taken over by the state.

“If you think of a carrot-and-stick approach, they used the stick,” Kyte said.

Contrast that with Race to the Top, the signature education reform pushed by the Obama administration, about which little is known beyond a few broad outlines. Figure out the feds’ formula — and hit it — and millions on millions in grant money could be yours.

“What I’m thinking they’re trying to do now is use the carrot,” Kyte said, adding that he doesn’t think the Department of Education has figured out exactly how much local control they’re really looking for.

Duncan said the overall goal is to improve children’s education by channeling innovation from districts to reward best practices, especially when it comes to improving education for children who aren’t currently achieving.

For example, currently under No Child Left Behind, if an eighth grader reads at a fourth grade level entering the year and improves two whole grade levels, the school district would still be penalized as failing that child — despite the vast improvement. Duncan said Race to the Top would change that, by tracking a student’s year-by-year progress and encouraging schools to use that data to improve their own performance.

That sort of tracking system is in use in many districts across the country — Duncan cited Louisiana as an example — though school districts in places like Pomona, Calif.; Tulsa, Okla.; and Lansing, Mich., have all seen vast improvement from aggressive student testing and using that data to adjust teaching.

Concerns
Duncan is scheduled to testify before the House Education and Labor Committee Wednesday, where he’ll be asked about those details. The leading Republican on that panel, Rep. John Kline, said he planned to press Duncan on how Race to the Top would be implemented.

“I appreciate much of what Secretary Duncan is trying to accomplish with the Race to the Top Fund, but I continue to have doubts about some of the specific tactics being used to get there,” Kline said Monday.

“For example, I think the Secretary deserves a lot of credit for his willingness to so aggressively take on the special interests — whether by offering support for high-quality charter schools or using performance pay as an incentive to improve teacher quality and removing ineffective instructors from our classrooms.”

“I’m concerned about the sheer number of federal guidelines, parameters, requirements, and priorities included in the Race to the Top program, and what all this federal intervention will mean for creativity and innovation at the local level,” Kline said.

Minnesota’s plan has faced opposition from within state borders.

Education Minnesota, the statewide teacher union, distanced itself from the state’s bid over what would be mandatory participation in the state’s Q Comp performance pay system and linking student test scores to teacher evaluations — both things that would be required in any district that signed on to a successful Minnesota Race to the Top bid.

“Education Minnesota enthusiastically endorses the goals of the Race to the Top program: making substantial gains in student achievement, closing achievement gaps, improving high school graduation rates, and preparing students for college or career,” wrote Tom Dooher, president of Education Minnesota, in a January 15 letter to Duncan. “However, we cannot endorse the non-student-centered path the Minnesota Department of Education has chosen to attain those goals.”

Will we win?
All those concerns become moot in Minnesota to some degree should Minnesota’s bid not get selected. And that’s a big question.

No one seems to know how many winners there will be, or at least they’re not saying. Basic math suggests 20 or fewer, because 40 states and the District of Columbia applied, and Duncan has said several times that “there will be more losers than winners.”

The actual number of winners is expected to be less than that, though estimates vary. The state Department of Education estimated 10 to 15 while the state’s top teachers union, Education Minnesota, said there could be as few as six.

It all hinges on how well districts fit the Department of Education’s many criteria — nebulous though they are.

Consider the issue of charter schools.

Of the 500-point Race to the Top assessment rubric, a category titled “Ensuring successful conditions for high-performing charters and other innovative schools,” can earn a state up to 40 points. In Duncan’s last job, as superintendent of the Chicago Public Schools, he gained a reputation for being a champion for charter schools. In fact, he told a group of reporters on Thursday that “removing restrictions on charter schools” is one part of the selection criteria.

The National Alliance for Public Charter Schools rated Minnesota’s charter law best in the nation, and the state has no caps on the number of charters that can be founded.

So that has to be good for the state, right? Charters will almost certainly be a necessary component of any successful bid, right Mr. Secretary?

“What we’ve said is that we want innovation,” Duncan said. “Charters are a piece of that but there are other types of innovative schools that aren’t charters, and so charters don’t have by any means a monopoly of innovation, great neighborhood schools, magnet schools, gifted schools, so what we want folks, again, it’s replicating — if something’s working we want more of that — and so charters are a piece of the application, but there’s no one factor that’s determining.”