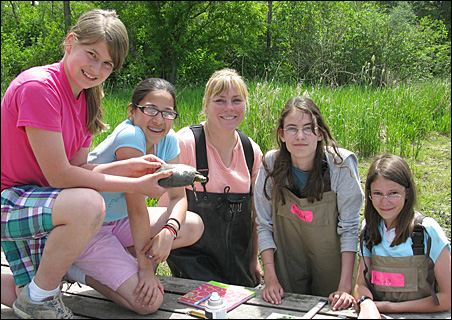 Courtesy of PBS Kids’ SciGirls
“SciGirls” featured in the kickoff episode of the new PBS series are members of an after-school club in Eagan. Shown left to right are Kate, Elena, their mentor Jaime Edwards, Maddy and Annie.

Like a lot of American women, I grew up admiring Marie Curie, who won a Nobel Prize in physics in 1903 and another in chemistry in 1911.

Her pioneering achievements in radioactivity stood as proof to me that women could be scientists. But if you were smart enough to manipulate quadratic equations, you also could see the discouraging reality that women were scarce in the world’s science labs and engineering workshops for most of the 20th century.

In fact, they still aren’t represented by anything close to their numbers in the population. For complex reasons, girls tend to lose interest in studies of science some time after fourth grade.

Now comes “SciGirls,” a sparkly Twin Cities Public Television creation with the ambitious goal of changing the way millions of “tween” girls think about science and engineering. The TV series and interactive website were spearheaded by some of the same TPT people who put together the long-running PBS science series DragonflyTV and Newton’s Apple.

Girls in Eagan
Each half-hour episode of “SciGirls” follows a different group of middle-school girls seeking answers to practical questions.

The group in the premiere episode is from Eagan, where girls founded an after-school club they dubbed B.L.A.Z.E., Becoming Loyal And Zealous Explorers. Their question was whether more turtles could live in the wetland near their school. It led them to learn about wetlands protection regulations, turtle population studies and a host of related issues.

Other episodes shot in Minnesota feature a puppet engineering project at the University of St. Thomas, an exercise in selecting riding horses at a veterinary hospital in Woodbury, wind-farm construction in Eden Prairie, a food-science lesson and a recycling project in St. Paul.

Izzie, an animated “SciGirl,” appears in every segment of the new series.

The series is intended for national appeal, though. And other episodes are set in the Florida Keys, New York City, coastal California and the deserts of Utah.

The SciGirl strategy is not to concoct the segments in television studios but instead to feature real girls who are engaged in scientific activities, said the series producer, Kathy Shugrue.

“We believe that that there is a certain appeal in showing real girls who are not actors,” she said. “The kids want to see girls who are like themselves.”

The girls with the turtle project in Eagan “were a going concern by the time we found them,” she said.

“We also are interested in the girls as girls,” she said. “We didn’t want to just show these kids as science girls. They have lots of different interests. They like sports and clothes and friends.”

This has been a tough problem to understand, let alone to solve.

In elementary school, girls are as enthusiastic about science as boys, according to a National Science Foundation report. [PDF] Sixty-six percent of fourth-grade girls said in a survey that they like science, nearly the same as the percentage of boys.

But after that age, girls quickly drop away from science, technology, engineering and math — the cluster of studies called STEM.

“Girls begin to conclude that STEM is not for them,” the report said. “These beliefs often begin early and influence choices they make throughout school.”

Women earn about 45 percent of all doctoral degrees but less than one third of those awarded in chemistry, computer sciences, math, physics and engineering, according to a separate report [PDF] by the Institute of Education Sciences at the U.S. Dept. of Education.

Women teaching math
In Minnesota, the interest gap has closed in recent years, said Mike Lindstrom, the executive director of SciMathMN, an education and business coalition which works to improve STEM education throughout the state.

That’s especially true in math and in sciences like biology and medicine. One reason may be that more women are teaching those subjects.

“We have done a tremendous job in Minnesota in achieving balance in our teaching force,” Lindstrom said. “Right now it is very balanced in terms of males vs. females standing in front of kids teaching math.”

The gap hasn’t closed nearly as much, though, in pre-engineering classes and some other areas of technology education, he said.

It isn’t a lack of ability that is driving girls away from those studies.

Analysis of Minnesota students’ most recent scores in tests conducted under the Trends in International Mathematics and Science Study showed no significant differences based on gender, Lindstrom said.

“The good news this is telling us is that males and females are equally capable of handling this content. There seems to be no doubt about that,” Lindstrom said. “So our next frontier is to find out why girls aren’t signing up at the same rate and why they aren’t going into these professions at the same rate.”

Cars vs. other designs
There are plenty of theories but very little solid evidence to answer those questions.

Lindstrom, who taught technical education for years in the Anoka-Hennepin School District, said some teachers recently have gone out of their way to overcome what they worry is institutional bias.

“In a lot of those classes we were offering students projects that are typically appealing more to males than females,” he said.

A design project in a technical classroom, for example, more often than not focused on something to do with cars, he said. Instead, one of the innovative Anoka teachers put together a mechanical challenge involving wheel-chair designs that could enable a handicapped person to reach the lowest drawers in the kitchen. The educational value was the same, but the appeal to girls was much stronger.

Not everyone buys the cultural bias claim though. Some psychologists offer a different explanation: that girls prefer working more with people than with computers, machines and electrical wires.

“Despite their mathematical prowess, they were less likely than boys to go into physics or engineering,” the Times said.

A similar conclusion comes from a study at the University of Kansas of the large gender gap in the computer industry. The researchers found that information-technology workers especially enjoyed manipulating objects and machines, whereas workers in other occupations preferred dealing with people.

“Once the researchers controlled for that personality variable, the gender gap shrank to statistical insignificance: women who preferred tinkering with inanimate objects were about as likely to go into computer careers as were men with similar personalities. There just happened to be fewer women than men with those preferences,” the Times said.

A SciGirl named Izzie
Whatever the reason for the gap, America could be more innovative if more bright, creative girls pursued science careers. For that reason, Congress and the National Science Foundation have developed dozens of programs aimed at lowering any barriers to women in science.

It is just such an initiative that gave rise to SciGirls.” Most of the funding comes from the National Science Foundation with additional support from ExxonMobil.

The program builds on a project that TPT started several years ago and also on DragonflyTV.

One of its unique features is Izzie, an animated “SciGirl,” and her best friend, a boy named Jake. Izzie starts each episode finding herself in jams that only science can fix. She surfs to the SciGirl home page, jumps into a video of the real-life SciGirls and follows their story. She also hangs out on the website where girls can create personal pages, design their own avatars, upload projects and connect with friends.

“It’s not quite Facebook, but … we wanted to show the girls it is all about sharing your science with other girls,” said Shugrue, the producer.

The creative team behind the series has a collective mountain of experience at kids’ programming. The executive producer is Richard Hudson, creator of Newton’s Apple and DragonflyTV. Shugrue co-created Fetch! for PBS Kids and produced Zoom at WGBH Boston. The Izzie animation is created by Soup2Nuts, producers of PBS Kids’WordGirl. And the website was developed by Big Bad Tomato Interactive, which has its mark on everything from Sesame Street to Disney fairies.

While their focus for this project is girls, I couldn’t help but wonder if boys will be welcomed.

“We hope there is enough appeal in our story that boys will not be turned off, and we do have Jake (Izzie’s sidekick),” Shugrue said. “We did testing and we did see that boys enjoy and watch it.”

Sharon Schmickle writes about science, international affairs and other subjects.