Standing alone, Minnesota’s budget problems clearly are serious. Stack the state next to others nationwide, though, and it becomes even clearer that Minnesota’s fiscal house needs major repair as the state Legislature begins its session this week.

To examine just one measure: Minnesota is second only to Alaska among states that relied on one-time fixes to close their budget gaps for this fiscal year, according to an update from the National Conference of State Legislatures.

It was a high-stakes bet on recovery from the recession, a strategy for buying time until revenues rebounded.

Now it looks like a losing bet. The revenue nightmare persists in state after state along with stubbornly high unemployment. Indeed, rather than turning around as the recession ends, the revenue plunge continues in Minnesota and most other states.

A well-entrenched downturn
“The longest economic downturn in decades appears to be well entrenched and is manifesting itself in multi-year budget shortfalls,” said the report from the National Conference of State Legislatures. “Many states already foresee budget gaps in FY 2011 and FY 2012. It is hard to see when they will end.” 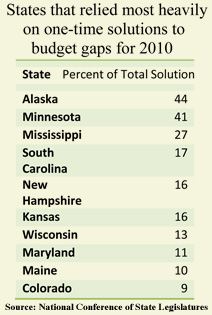 Many states cobbled together a range of strategies for closing budget gaps this year — from substantial tax increases to deep spending cuts. And many states took what they could of one-time fixes, even while acknowledging that’s not a real solution to long-term budget problems.

Kentucky’s Gov. Steve Beshear echoed many other leaders when he said in the Lexington Herald-Leader on Sunday, “Kentucky must begin breaking its reliance on one-time solutions to balance our budget. I admit that my proposed budget includes some of those one-time solutions, such as debt restructuring, alternative borrowing and fund transfers. Is this the best practice? No, but it’s necessary at this, the worst economic time in our recent history, to keep from making damaging cuts to our core priorities.”

Minnesota cut spending substantially too. But in Gov. Tim Pawlenty’s solo post-session effort to balance the budget last year, he relied on one-time solutions to close 41 percent of the state’s gap, mainly by delaying payments to school districts.

Only Alaska deployed that strategy for a larger share of its problem, counting on one-time solutions to get 44 percent of the way to a balanced budget. Unlike Minnesota, oil-rich Alaska had large reserve funds it could tap to get most of the way. 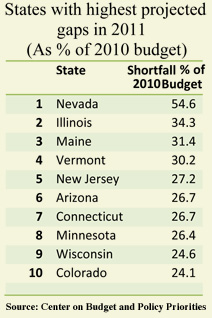 Further, Minnesota faces a structural budget imbalance of $5.4 billion, not counting general inflation. In other words, the state has a chronic shortage of funds to meet obligations that have remained in place through several rounds of one-time fixes in which the decision makers have neither raised taxes nor formally cut the programs tied to those obligations.

Minnesota is not, by any means, the only state facing shortfalls well into next year and maybe even beyond.

Nearly half the governors already have submitted their budget proposals for the upcoming fiscal year, which begins on July 1, 2010, in most states, the Washington-based Center on Budget and Policy Priorities said in an analysis reported last week.

“The worst recession since the 1930s has caused the steepest decline in state tax receipts on record,” the center said. “As a result, even after making very deep cuts, states continue to face large budget gaps.”

More shortfalls
New shortfalls have opened up in the budgets of at least 41 states for the current fiscal year, it said. Of those, 24 states already have acted to reseal the budget gaps and 11 have developed proposals to do so, mostly by raising taxes or cutting spending.

In Minnesota, the Legislature could go to work on the problem after it convenes on Thursday. Pawlenty is expected to propose his fixes next week.

Meanwhile, initial indications suggest that almost every state (except North Dakota and Montana) will face shortfalls as big next year — or, even bigger than those they faced this year.

When you look at the projected shortfalls as a percentage of each state’s budget, Minnesota ranks eighth among states facing the worst prospects. Nevada, Illinois and Maine are in the worst shape by that measure.

The one safe bet at this point is that debate over this issue will reverberate throughout this legislative session and beyond, at least until Election Day.