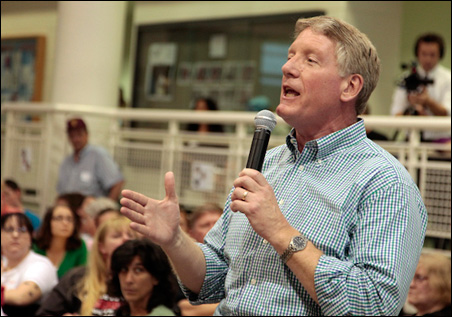 One of the most respected people in Minnesota politics offers some interesting insights about DFL dynamics in explaining why he became the party’s first major candidate to pull out of the gubernatorial race.

After studying the results of last Tuesday’s caucuses, former state legislator Steve Kelley decided Thursday to pull the plug on his campaign for DFL endorsement.

The key, Kelley said in an interview Friday, wasn’t the 4 percent total he registered in the straw poll of DFLers attending caucuses. Rather, he said, it was not scoring well enough in suburban areas where he had hoped to show strength. Even in suburban precincts where he had supporters, they too often lost their bids to become delegates to citizens backing other candidates.

Minneapolis Mayor R.T. Rybak, did especially well in precincts where Kelley expected to be strong, he said.

Kelley, 57, is a pleasant man. Very bright. He also was seen as an imaginative and pragmatic state legislator while representing Hopkins in the state Senate from 1992 to 2006. Few in the state of have as complete a grasp of education issues as Kelley.

He was able to do OK in gaining financial support, picking up a little more than $200,000 contributions, and was well-known by active DFLers.

So what was the problem?

Not a good fit in present party system
“Our system, like a lot of things, isn’t set up to deliver perfect results for everybody,” he said.

There’s a shorter way of explaining political reality: Kelley’s a little boring. He cannot be a sound-bite candidate.

“I would say they [the forums] were a little frustrating,” he said. “When I did get more time, it was encouraging because I felt like I was able to capture the innovation and energy I wanted to bring to the governor’s office.”

Kelley had other problems, too. Well known as he is, some activists had the impression that he already had been given chances and lost. Those attitudes date to 2006, a year of a political double defeat for the man who always wears a green tie.

The first defeat came at the DFL’s state endorsing convention, when Kelley lost the gubernatorial endorsement to Mike Hatch after six ballots.

That was followed by the attorney general debacle. Recall, Matt Entenza initially was the DFL’s endorsed candidate. But, when it was discovered that Entenza had hired a firm to dig up dirt on Hatch, Entenza was forced off the ticket.

Then came a bit of political maneuvering that most attribute to Hatch. Former U.S. Rep. Bill Luther got into the DFL primary race for attorney general but never campaigned. Still, with his considerable name recognition, Luther’s entry created a situation where two men were going up against a woman. Swanson won, with 42 percent of the vote, 5 points ahead of Kelley. The disinterested Luther managed to get 21 percent of the vote.

“But I think that was balanced out by a lot of people who told me that they took the view that if I’d been endorsed for governor, we’d be running a re-election campaign.”

So that same old question: What went wrong?

“The times are complex,” he said. “Figuring out a single message is very difficult.”

Even internal party politics are difficult.

“There are many people — and this came up over and over again — who are concerned about the tone of politics,” Kelley said. “They ask you, ‘What are you going to do to help bridge the gap with Republicans and get things done?’ But then you have others who are saying, ‘We’re in the majority, don’t worry about them, let’s just do it.’ ”

Kelley, and his campaign manager, Carrie Lucking, said they knew the path to endorsement “was narrow” when Kelley decided late in 2008 to get into this long race. That narrow path was through the suburbs, especially his home turf, the western suburbs.

He underperformed where he needed his best performance. Rybak, especially, showed surprising organizational strength and certainly had high name recognition because of the daily news prominence that comes with being a big-city mayor.

The day after, Kelley reviewed the results carefully — “Slept on them Wednesday night” — and decided to call it quits Thursday.

Will he ever run again?

“Not for governor,” he said. “But I decided a long time ago, I wanted to be involved in public service.”

He’s at the edges of that now as a teacher at the University of Minnesota’s Humphrey Institute, where sound bites aren’t so important.