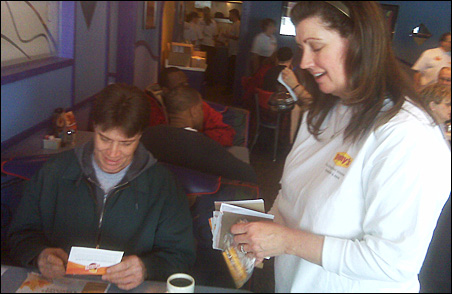 MinnPost photo by Joe Kimball
Visiting with customers is Stacy O’Fallon, the franchise controller, who came in from local headquarters to help out with the rush at Denny’s.

Julie and I took a break this morning — between my daily MinnPost duties and her work on a new book — to swing by the Denny’s restaurant across from the Maplewood Mall and check out the free “Grand Slam” breakfasts the chain advertised during the Super Bowl.

It seemed like a funny way to interact with a Super Commercial. After all, we don’t need a new car or a domain name, and there’s only so much beer and so many Dorito’s you can eat, and we already watch Letterman.

But we hadn’t been to Denny’s in quite a while — and we wondered what the scene would be like.

And if the line was too long, we figured, we’d just go somewhere else.

It wasn’t that bad: Folks filled the foyer and stood in space between the inner and outer doors, but the hostess said the wait would be less than 30 minutes. Or, if we’d prefer, she’d give us a rain check, good through the coming week.

We decided to hang out a bit, people watching and chatting, and in about 15 minutes, they called our name.

Like almost everyone else in the place, we ordered the free Grand Slam: two pancakes, two eggs, two slices of bacon and two sausage links. Scrambled for me, over-medium for Julie. One orange juice and one coffee.

The food came in just minutes, and it was hot and tasty, although it was way more breakfast meat than I’ve eaten in a year.

Then Stacy O’Fallon stopped by the table to give us a coupon book. (Denny’s is hoping to lure back all those coming in for the freebie, and figured a few buy-one-breakfast, get-one-free offers might bring in some return business.)

O’Fallon is the controller for Nath Cos., the Bloomington-based franchisor that runs five Denny’s in the metro area, including the one in Maplewood. Most of the folks from corporate were helping out today with the rush, she said. And they were having fun.

Employees didn’t know about the promotion until the Friday before the Super Bowl, she said. “They’d told us that something was coming, something big,” she said. And some probably figured it out, because they’d done the free Grand Slam deal last year, too.

Cooks and waiters were having a ball, she said, even though there was a constant stream of customers. All the employees were welcoming and friendly. Even customers waiting in line were very orderly, apparently realizing you can’t complain about a wait when you’re getting something for nothing. 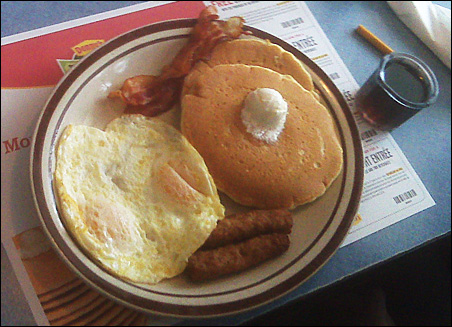 O’Fallon said it was a nice change of pace for someone like her, an accountant, to get out into the field and meet consumers. In some cases, she found it very touching.

“I’ve talked with some customers who said they appreciated the free deal so much, because they were unemployed and don’t eat out anymore,” she said.

She said a huge rush of high school kids showed up right at the restaurant’s 6 a.m. opening, hoping to get a free breakfast before rushing off to school. Then there was a short lull just before 9 a.m. but then picked up again. The promotion ran until 2 p.m.

She said the snow and slippery roads “worked against us” because the lines seemed to be a little shorter than last year. But a manager on the phone kept telling callers that it didn’t really matter when they arrived — there was going to be a 30-minute wait whenever they came.

O’Fallon said that the national Denny’s chain was paying the cost of all the free food, but the local owners had to pay the extra overhead costs for staff and supplies.

And customers did pay for beverages and any other items they ordered. Our bill was $4 for orange juice and coffee. And we left a tip for the full amount of what two breakfasts would cost.

O’Fallon said it was obvious to her that it was a win-win for the customers and the company.

“We’re getting some people who’ve never been in a Denny’s, or haven’t come in a while. And we’re figuring we can get them to come back,” she said.