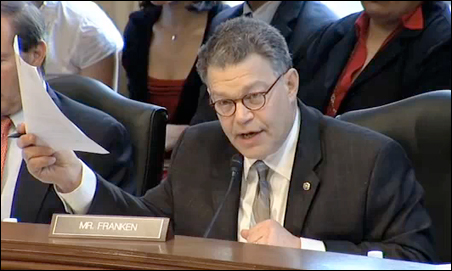 WASHINGTON, D.C. — Three of the four federally supervised Indian schools in northern Minnesota failed to meet federal testing standards last year, yet they aren’t likely to see much of the cash being doled out to public schools across the country under the Obama administration’s signature education reform plan.

Two of them are also sorely in need of physical repairs or replacement, and have been for years. Yet, at current funding levels, the money to fix them may not arrive for years, possibly decades.

“No student in Minnesota should have to contend with mold problems or huge leaks, but that’s what kids in some reservation schools deal with every day,” said Minnesota Sen. Al Franken, a member of the Senate Committee on Indian Affairs. “Students can’t be expected to achieve at high levels when their school building is falling apart.”

The four schools, all in northern Minnesota, are among 183 schools funded by the Bureau of Indian Education, which is managed under the Department of the Interior. The Bureau acts like a giant, nationwide school district, one of just two federal agencies that directly manage schools (the Department of Defense is the other). 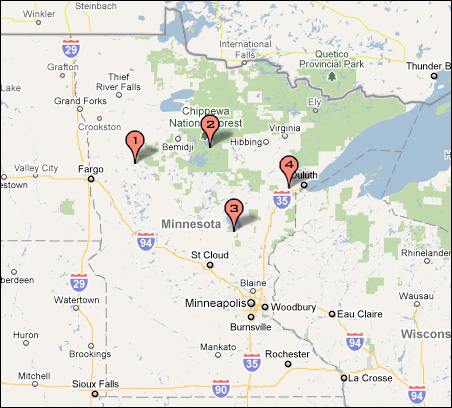 Failure leads to sanctions, restructuring
Under federal No Child Left Behind rules, a certain percentage of students at each school must score at or above grade level on state standardized tests in order for the school to meet expectations. If they don’t, the school fails. Each failure leads down a ladder of progressively stricter sanctions, to the ultimate penalty: restructuring.

Typically, restructuring means sweeping changes to the curriculum, accompanied by things like longer school days or years. In extreme cases, however, measures can be more drastic. Michigan Gov. Jennifer Granholm appointed an emergency financial manager to all but take over the Detroit Public Schools, while a school district in Central Falls, R.I., fired every single teacher, administrator and assistant at its perennially failing Central Falls High School.

Three of the four BIE schools in Minnesota are currently one rung removed from being ordered to restructure.

“It is unjust to expect our students to succeed academically when we fail to provide them with a proper environment to achieve success,” said Patricia Whitefoot, president of the National Indian Education Association. 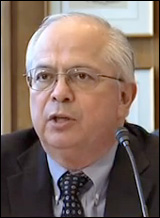 The signature education effort of the Obama administration thus far has been Race to the Top, a program that acts more like a carrot than a stick. States (and, in later funding rounds, districts), submit grant applications detailing how they plan to reform in hopes of being awarded a large pot of money to put their plan into action. Minnesota’s application, for one, seeks $330 million in funding to link student performance to teacher evaluations and mandate participation in the state’s Q Comp performance pay system, among other things.

No set-aside provision
Typically, federal programs like that will contain a specific set-aside for Indian schools, given that they wouldn’t otherwise see money funded to states because they’re not run by the states. Race to the Top didn’t include such a provision.

Rep. Betty McCollum called that a “simple oversight,” and introduced a bill in January to set aside 1 percent of the remaining Race to the Top funds for Indian schools, a measure that Reps. Collin Peterson, Jim Oberstar, Tim Walz and Keith Ellison have signed on to as cosponsors.

That bill was referred to the House Education and Labor Committee, where it remains.

Education Secretary Arne Duncan said the schools may be able to apply in a second-round application process (though there’s no guarantee they’d win), but stressed in an interview earlier this month that the problems facing Indian schools are much broader than Race to the Top could fix.

“I don’t have an easy answer, but it’s way beyond Race to the Top,” Duncan said. “These aren’t our schools, but we want to do everything we can to help strengthen them.”

Facilities in disrepair
Indian schools face similar problems to those of rural schools — a difficulty in attracting top teachers not least among them — but also have unique challenges. The quality of life on many reservations is poor, with increased rates of unemployment, alcoholism and domestic violence, as well as lingering tensions between some tribes and the federal government that trace their way back through sometimes centuries of broken treaties and promises.

Source: Bureau of Indian Education
*Note: P/A is the combined number of students who scored as proficient or advanced in that respective subject

But one particularly striking problem facing the schools is the quality of the school buildings themselves.

About one-third of Indian schools — 64 in all, including Bug-O-Nay-Ge Shig School in Bena — are listed as being in “poor condition,” but a lack of funding for school construction means it could be years, possibly decades until the school is brought up to an acceptable level. [PDF] 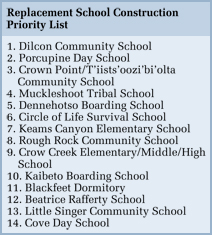 “At this level of funding, it would take 30 years to clear the backlog” and bring all Indian schools into acceptable condition, said Indian Affairs Chairman Sen. Byron Dorgan of North Dakota.

The Bureau of Indian Affairs maintains a separate, more critical “Replacement School Construction Priority” list, which ranks the 14 Indian schools in “most need of replacement of their core academic and/or dormitory facilities.” The most recent list was published in March of 2004.

Sixth on that list is Circle of Life Survival School, in White Earth. Franken’s office said nothing has changed since then that would remove Circle of Life from the list.

“The people need to know what dismal conditions these schools are in,” Franken said. “Only then will Indian schools become a priority in the federal budget.”

An earlier version of this story incorrectly stated that Nay Ah Shing did not make Adequate Yearly Progress as defined by federal testing standards in the 2008-09 school year. The school did meet the standards, though it remains on the second-lowest rung of the federal disciplinary ladder.