There’s no need to start dancing in the street or bursting into a chorus of “Happy Days Are Here Again.”

On the other hand, the state’s economy isn’t tanking anymore; in fact, it’s showing a slight bit of improvement.

Based on the economic forecast (PDF) delivered today by the Minnesota Department of Management and Budget, what should the headline be?

The numbers: In the current biennium, the $1.2 billion deficit forecast last fall has now shrunk a bit to $994 million. 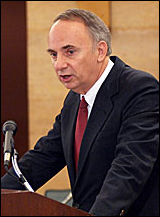 That’s still a huge number, but Stinson, not known for wild-eyed optimism, said the good news is that any improvement is an encouraging positive sign, compared with the grim realities of last summer, when all sorts of numbers were written in red ink.

“The real issue is how fast the recovery will proceed,” Stinson said, adding quickly that there are both local and international issues that still could turn charts of the improving economy from a shallow U shape, to a W, complete with another bad dip.

The slightly improved forecast still creates daunting budget problems for the governor and the Legislature as they grapple with getting the current budget in balance. And the following biennium deficit, 2012-13, is still a mind-numbing $5.789 billion, not counting inflation.

Tom Hanson, finance department commissioner, suggested that the number is not as overwhelming as it looks IF the legislature makes permanent the one-time unallotments that Gov. Tim Pawlenty made last spring. That’s an unlikely scenario, though, for that would mean the elimination of such programs as the General Medical Assistance Care program and also mean doing some more fancy footwork with K-12 funding.

“While revenues are slightly better than expected,” Hanson said, “this forecast doesn’t significantly change the budget challenges faced by the state.”

Hold off on that celebration! Budget forecast shows improvement but pace of recovery still unclear