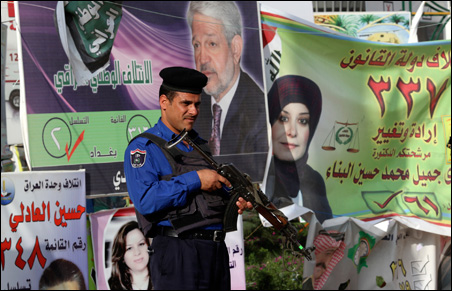 REUTERS/Ahmed Jadallah
An Iraqi policeman stands guard in front of election posters in Baghdad on Wednesday.

If you see car caravans heading toward Chicago this weekend, chances are good that the vehicles will be filled with Iraqi Minnesotans who are traveling to vote in their homeland’s parliamentary elections.

Ahmad Ali plans to be among them.

“Many, many people are going from Minnesota to vote in Chicago,” said Ali, who lives in Mounds View and teaches at the Imam Hussain Islamic Center in Brooklyn Center.

Others — like Salih Radhi, a technical writer for Delta Airlines who lives in Plymouth — will fly to Detroit to cast their ballots.

At stake: leadership during U.S. withdrawal
This election comes at a crucial juncture for war-torn Iraq and for American involvement in that country.

A key question riding on the outcome is who will lead the government in a land where nearly 100,000 U.S. troops continue to operate.

The stakes are high for the United States as well as for Iraq because the leaders chosen as a result of this election will create the conditions under which American troops leave the country. Indeed, the leaders will play a large role in determining the success of the scheduled pull-out, which calls for ending combat operations in August and full withdrawal by 2012.

Should Iraq lose its shaky hold on stability, the Obama administration could be forced to delay the withdrawal.

Expatriate voting starts Friday
The United States is one of 16 countries where some 1 million expatriate Iraqi voters are eligible to take part. While March 7 is Election Day in Iraq, voting will be allowed on March 5, 6 and 7 at polling places designated in the District of Columbia, California, Arizona, Texas and Tennessee, as well as in Illinois and Michigan.

The parliament chosen by Iraqi voters this weekend will in turn choose the new government. Incumbent Prime Minister Nouri al Maliki wants to keep his job, but he faces stiff — sometimes, violent — opposition in a volatile mixture of regional and ethnic factions.

So a prime indicator of the country’s future will be whether Maliki’s Dawa party and his broader State-of-Law Coalition will win the election.

Free to walk around at night
The leadership question is decided for both Ali and Radhi.

Ali, who fled his Baghdad home in 1992 under threat from Saddam Hussein’s government, is a long-time Maliki supporter. And Ali thinks his old friend has a very good chance of keeping his job.

“He stands for all of Iraq,” said Ali, who goes it Iraq often — most recently in November and December last year. “And he has four years of experience. That’s very valuable.”

“No one dared to walk outside at night before he came into office, but he has provided security so we can enjoy our lives and feel free to walk around,” Ali said. “For many families, jobs have returned and the financial situation has improved. … Electricity is much better.”

Radhi also is from Baghdad, and he keeps close contact with relatives living throughout the city.

Iraqis respect the fact that Maliki has been prime minister during a very tough time, he said.

Before Maliki took office, “al-Qaida controlled Sunni areas and militias controlled some southern parts of the country,” Radhi said. “Unfortunately he had to work with a government he did not choose, but he has shown to be a very capable person. He did a good job as far as security goes. … In the heat of the election now, a lot of people are trying to tear him down, but he is still very popular.”

U.S. forces can leave
Whether or not Maliki deserves credit for the relative calm in his country (Americans could argue their troop surge and other strategies played a prime role), he essentially makes the same case as Ali and Radhi in campaigning for his coalition to retain control.

“Today’s Iraq, dear brothers, is not the Iraq of 2005 or 2006,” has been Maliki’s signature slogan at political rallies.

Further, Maliki has been a calm but firm advocate for American troop withdrawal. He told the Associated Press this week that he did not see any need at this point for U.S. forces to stay beyond their planned 2011 departure date.

When asked whether he might ask for U.S. forces to remain beyond that date, Maliki said he would not be afraid to ask for troops if needed, but that he thought it wouldn’t be necessary.

“Let us not forget that Iraq is sticking to the strategic security agreement between Iraq and the United States, and Iraq considers it as a partnership guarantee in several levels. If Iraq is subjected to any security threat, it can ask for help,” Maliki said.

Rahdi, of Plymouth, predicted that Iraq will continue to need close U.S. ties.

“There is no doubt in my mind,” Rahdi said. “Our fear is from neighboring countries. I believe he is sincere about keeping a good relation with the United States, but not what people would view as the relationship between an occupier and an occupied country. It will be a fruitful relationship in the interests of both Iraq and the United States.”

As a citizen of both countries, Rahdi places immense hope in the mutually helpful relationship he envisions.

“I want to see it benefit both countries because I love Iraq and I love the United States as well,” he said.

Popular, but …
Nir Rosen agrees with the Minnesota Iraqis that Maliki’s prospects are good. Rosen, a fellow at New York University Center on Law and Security, assessed the Iraqi election in an interview with the Council on Foreign Relations.

“Despite tensions in Iraq because of recent violence, the coalition led by Prime Minister Nouri al-Maliki will probably lead in the March 7 parliamentary election, and Maliki will likely return as prime minister,” Rosen said.

“Maliki is perceived as being relatively nonsectarian and nationalist. He has a petro-state agenda of a strong government, which uses oil revenues to produce wealth for Iraq. That’s quite popular,” said Rosen, who recently returned from a trip to Iraq.

Since taking office in 2006, Maliki has proved to be more decisive and effective than many had expected.

The New York Times painted a relatively dark picture of Maliki’s prospects, noting that he is not a polished political campaigner and not particularly charismatic.

“His path to another four years in office has become increasingly uncertain, his campaign erratic and, to some, deeply troubling,” the Times said. “Even his own supporters acknowledge that Mr. Maliki now appears isolated, imperious and impetuous, his re-election prospects hurt by events out of his control and by others of his own making.”

Still, the Times acknowledged that “in a country convulsed by chaos and carnage, his message and achievements have resonance, even among his critics.”

What’s most likely is that Maliki’s coalition will win the largest plurality of the new parliament’s 325 seats but not a majority, the Times said, citing polling information from unnamed sources. Under that scenario, Maliki could retain his post only if he can cobble together a postelection coalition among parties whose leaders seem able to unite only in the desire to elect a leader.

U.S. favorite: Ayad Allawi
The United States would prefer to see Ayad Allawi and his Iraqiya Party take back the leadership, Rosen said. Allawi was the U.S. choice to act as interim prime minister prior to Iraq’s 2005 elections. Although he is a secular Shiite, he stands a good chance to pick up some of the Sunni Arab vote.

But Allawi is mistrusted because he is a former member of the Baath Party, Rosen said. He joined the party in his youth and led its organizations while living in exile in Europe. Then he left the Baathists in 1976 before Saddam Hussein took over the party and drove it as his power base until 2003.

The Baathists’ role in Iraq’s next government has been one flashpoint in the election campaigns, reflecting bitter differences that persist in the country. A committee that vetted candidates barred hundreds of Baathist candidates from the election alleging they had ties to Saddam’s regime. Those who were blacklisted include prominent Sunni lawmakers, and one question is whether the ban will tamp down the Sunni minority’s participation in the voting.

From his perspective in Plymouth, Radhi said he was surprised to see the United States back Allawi.

“I don’t think any Iraqis want to go back to those days of the Baathists,” he said. “They have done so much damage to the country.”

Among other objections, Allawi “is seen as trying to work from outside the country,” most recently in dealings with Saudi Arabia. And he has been accused of trying to influence the election with large sums of foreign money.

“This is not what we were hoping,” Radhi said of the U.S. support for Allawi. “We want to have good relationships with neighboring countries, but we don’t want to have alliances that pit one against the other.”

Another flashpoint is tension between Kurds in the north and Arabs dominating the country’s southern reaches. The Kurds have enjoyed a measure of autonomy at the same time they became part of the post-Saddam government. Now they are wrangling with Baghdad for control over the oil-rich region near the city of Kirkuk and other northern territories. Initially the election was scheduled for January, but it was delayed amid fighting over votes in Kirkuk.

Even the Kurds are divided, though, into rival parties.

Faith in the process and the country
Against that backdrop of division and political intrigue, Iraq’s relative stability has been shaken in recent days by election-related bombings and assassinations.

But Ali’s faith in the election process and his country’s future was not shaken as he prepared to vote in Chicago.

The Iraqi people are united, he said, in that they do not want a return of the violent rivalries that have led to tens of thousands of deaths since 2003. They feel relieved that Iraqi troops are in a position to take control of their country’s security. And despite the pre-election violence, most are committed to solving their differences through the constitution and elections.

“That previous level of tension is gone,” he said. “People realize it was in the past and it would be a mistake to see it again. … I don’t think there could be problems like there were in 2004 or 2005.”

Rahdi added that most Iraqis are cautiously optimistic that Election Day and the years to come will be secure and safe in their country.

Sharon Schmickle writes about international affairs, science and other topics for MinnPost.