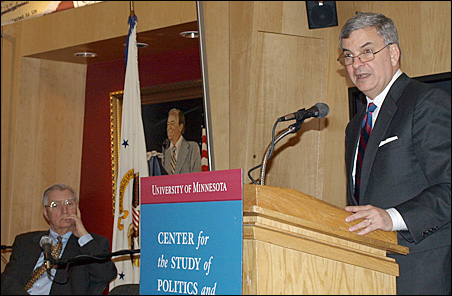 If there is another terrorist attack in the United States — and defense experts say another one is likely — that would be precisely the wrong time to reopen the bitter arguments about our country’s use of cruelty and torture in the aftermath of the 9/11 attacks.

Now is the time to start clearing the air on issues that have so divided America, Alberto Mora, former general counsel of the U.S. Navy, told a noontime crowd at the University of Minnesota’s Humphrey Institute on Tuesday.

“We don’t want to be having this debate in the aftermath of another terrorist attack,” Mora said. “We need to sort out what’s in our best long-term interest and not respond to the terror and passion of the moment.”

Mora made his position clear: “Our country’s descent into cruelty and torture was not legal, was not necessary and was not effective. It weakened our country, hampered our efforts in the war on terror and made us less safe.”

A long-term national consensus
Before 9/11 there was a national consensus, he said, against cruel punishment. While the United States lapsed from that general view during the Civil War and other conflicts, the consensus had shaped modern-day foreign policy and international rules outlawing torture.

Now it “hangs somewhat in the balance,” Mora said.

“We know that if there is another terrorist attack, the numbers of those who support cruelty will rise again,” he said. “They will press the case that our national security requires harsh interrogations and demand that our values yield again.”

He concluded: “This is why we need to restore now the national consensus against cruelty, why we need to revert to a legal standard that clearly outlaws cruel treatment anywhere and defines it as a criminal offense — and why we need insure accountability for those who engage in it.”

How Mora got to that position is one of many intriguing back stories from former President George W. Bush’s war on terror. They are just now coming into full light.

An appointee in two Bush presidencies
In 2001, Bush appointed Mora to the post of Navy general counsel, the most senior civilian lawyer for that force. Mora had served under Bush’s father as general counsel for the United States Information Agency.

In 2002, Mora was among a few in the Pentagon who learned that detainees held by the United States at Guantanamo Bay in Cuba were being subjected to physical abuse and degrading treatment.

He argued that the treatment was illegal, and others in the Pentagon agreed.

But the Justice Department’s Office of Legal Council issued new guidelines authorizing the treatment in a document now infamously known as the “Torture Memo.”

Mora pushed back over the course of several years. He argued in a July 2004 memo: “Cruelty disfigures our national character. It is incompatible with our constitutional order, with our laws, and with our most prized values. Where cruelty exists, law does not.”

Joined with CVT and others
It was only after Mora retired in 2006 that he could go public with his crusade. He took his arguments to Capitol Hill and joined forces with human-rights organizations such as the Center for Victims of Torture in Minneapolis.

“I was involved in this thing for four years” before it came into public light, he said Tuesday.

Mora made a lawyerly argument Tuesday against the use of cruelty in military interrogations. (He used the broader term “cruel” rather than focusing on torture alone. But he said that U.S. interrogators did torture some detainees.)

Bush administration’s assumptions
Bush’s policy was based on the false assumptions, he said, that cruelty was necessary, legal and within the president’s constitutional authority as commander in chief. Further, administration officials held that if it was discovered no one would care or be held accountable and that it would not adversely affect national security and foreign policy.

It is true that many Americans didn’t seem to care.

“What was once unspeakable is now the subject of polite conversation,” Mora said. “Cruelty which was held in disrepute has been astonishingly rehabilitated in the minds of many.”

But the tactic damaged the United States in several ways, Mora argued.

It set back a foreign policy that had been grounded since World War II in a human-rights strategy, giving rise to standards upheld in the Nuremberg Trials and the Geneva Conventions.

“The practice of cruelty has been demonstrably counterproductive to our efforts in the war on terror,” he said. “Cruelty has made us weaker, not stronger. It has blunted our moral authority, sabotaged our ability to build and maintain the broad alliances we need to prosecute the war effectively and diminished our operational effectiveness.”

It backfired dangerously in that abuses at Abu Ghraib prison in Iraq, Guantanamo and elsewhere “perversely generated sympathy for the terrorists,” he said.

The damage remains serious at tactical and operational levels, he said, where senior U.S. flag-rank officers blame the Justice Department’s so-called “torture memo” for abuses at Abu Ghraib. Flag-rank officers who are “intimately involved in counterterrorism” will tell you that Abu Ghraib and Guantanamo are “the leading causes of U.S. combat deaths in Iraq,” Mora said.

“Every military officer I have ever spoken with on this issue — and that includes dozens of service chiefs and four-star admirals and generals — describes the authorization to engage in cruel interrogations as being contrary to our national interests,” he said.

The debate has simmered down since Bush left office. But a successful terrorist attack “would bring all of these issues again,” Mora said. And “those who were sitting on the fence — who may have been inclined to believe that cruelty is OK — a lot of those people are going to start agreeing that it is OK.”

That’s why, he said, “It is important for our country to address these issues now.”

Mora’s lecture was sponsored by the Humphrey Institute’s Center for the Study of Politics and Governance. Appearing with him were former vice president Walter Mondale and Prof. Lawrence Jacobs, the center’s director.

The issue of accountability
After Mora spoke, Jacobs asked questions posed by the audience:

Q: There is a strong feeling there should be accountability — that laws were broken and the Constitution was violated. Should some people be prosecuted?

Mora: As an attorney, I’m offended by the notion that torture may have been committed and there is no accountability. … but at the same token, it is politically unthinkable to demand full accountability in these matters. I don’t think it is going to happen in this political environment. … what I would prefer is something like a truth commission that really gets to the heart of these issues, establishes a clear record of what happened, conducts a full accounting of the costs to our nation and — if there were benefits — the benefits to our nation.

Q: Is the Obama administration dragging its feet on accountability?

Mora: Obama is in a very difficult situation. … The Republican Party today seems to embrace the Bush-era decisions. Harsh interrogations? That’s OK. Guantanamo? OK. … Because it has become so partisan — because there seems to be an inability to have a nonpartisan debate on this issue without the finger pointing or the desire to score political points — you can’t move forward in this atmosphere. I think the Obama administration’s heart is in the right place. But politics is the art of the possible. There is no quick way to find the solutions.

Q: Even as the president and vice president and Secretary of Defense Rumsfeld were moving forward with this policy of torture and cruelty, there was an intense battle going on behind the scenes for several years. For the most part, that was not known by the American public. Do you think it would have been helpful if someone had leaked the vibrant debate that was going on behind the scenes?

Mora: It depends. … For probably the last 20 years, and certainly during my tenure as navy general counsel, there were a lot of things you just didn’t put in writing because it’s too sensitive. And that has its own cost. I wrote very few emails or other kinds of memoranda on this issue. The preference was for personal conversation. You simply didn’t know what would happen if one of these emails or document went adrift. … So you have a tendency now that is deeply engrained in government where you don’t put down some of these sensitive issues on paper. That’s not good. That’s the consequence of being concerned about leaks.