College campuses may not be the bastions of progressive thought they’re often made out to be.

Proponents of the “sliding scale” approach used as a model the University’s approach to a fiscal crisis at the height of the Great Depression. In 1932, the University cut the pay of those making more than $3,600 by 20 percent, sliding down to no cuts for workers making less than $1,200.

The debate over the issue was long, passionate and filled with some parliamentary pratfalls. (Ah yes, even the best and the brightest can get all knotted up on parliamentary procedure.)

Under the proposal offered by an organization of professors called Faculty for the Renewal of Public Education, those making less than $50,000, the median salary at the school, would not take a cut.

Solid support for Bruininks’ plan
But in the end, the vote was 130-26 in favor of the Bruininks plan, which the financially beleaguered University says will save about $18 million at a time when it is trying to solve a $132 million budget shortfall, largely because of lagging support from the state and a $36 million unallotment by Gov. Tim Pawlenty. 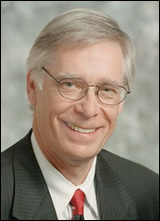 The rest of the savings is coming through a variety of moves, including layoffs and delays of capital projects. The 1.5 percent cuts to many of the union and civil service employees at the school comes in the form of three-day furloughs. Professors, meanwhile, will see their paychecks cut by 1.5 percent. A handful of top University administrators are taking 2.3 percent cuts.

Bruininks, who spoke first, said he opposed the sliding-scale approach, fearing that it would invite other universities to “cherry pick” some of the school’s top professors and researchers.

His approach, he said, “asks all of you to make a modest sacrifice.”

But the argument that seemed to carry the day was the “narrative” (that was a favorite word of the professors) they feared the public and the Legislature would hear if they rejected the Bruininks plan.

“I can tell you there’s a narrative we will not like if we do not support this resolution,” said Michael Osterholm, from the university’s department of epidemiology. He said that the public and state legislators would perceive a “no” vote on the Bruininks plan as professors refusing to take a small cut in hard times.

Mary Jo Kane, a professor in the school of kinesiology, was even more insistent that the profs support the president’s plan.

“I’m baffled there’s any discussion,” she said, adding that tenured profs should be “grateful” for what they have.

“We are the most blessed people on the face of the earth,” she said. “We are some of the most privileged people. We work at an institution that will never close or never move. … We’re lucky that’s all (the 1.5 percent cut) we’re being asked.”

Dissident views, too
The professor renewal group painted a vastly different picture. Though the faculty senate can vote only on issues directly affecting the faculty, proponents of the sliding-scale plan said all University employees should be considered in the vote. They said by rejecting the president’s proposal and adopting the sliding-scale plan, the University could come up with a fairer approach to cuts.

At a news conference held before the faculty senate convened, the renewal professors invited members of AFScME to speak to the fairness issue.

One of those speakers was Kim Hayden, a 37-year-old executive administrative office specialist, who celebrates her third anniversary on the job today.

Among her job duties in the physiology department, Hayden said, was handling the expense statements of some of the top administrators and faculty in the department. There were times, she said, when the expense-account dinners that she processed “were more than I was paid in a week.”

The renewal profs said those sorts of stories led them to believe that the University needs to be audited in a “transparent” way to show just how money is being spent.

Their resolution, calling for just such an audit, was tabled after considerable parliamentary confusion.

At times, the senate debate was passionate. As it became clear that the sliding-scale approach was not gaining traction among the faculty senators, Karen-Sue Taussig, an associate professor in the college of liberal arts, went to a microphone and said, “Do what’s right for the community. It’s shocking people are not standing up for the lowest-paid workers.”

There were expressions of empathy, but not votes.

Even though the Bruininks plan, which had the support of the Faculty Consultative Committee, ultimately passed easily, the president didn’t get out of the senate meeting unbloodied.

Joseph Konstan, a computer science professor, said he would support the president’s pay-cut plan. Then, added a big BUT.

In the midst of budget shortfalls, there is “no compelling plan” to deal with financial problems that are expected to only get worse, at least in the next few years.

“Mr. President step up, or step aside,” Konstan said.

Many of the profs applauded.