Minnesota Women’s Press is celebrating its 25th anniversary this month. Depending on your age, 25 years ago is either ancient history or just yesterday.

In that 25-year span, Minnesota has seen significant progress in women’s political power: The state has elected women to two U.S. House seats and one U.S. Senate seat. Two speakers of the Minnesota House have been women. For a time in the early 1990s, the Minnesota Supreme Court was the only high court in the nation with women in the majority. A woman now serves as the state’s attorney general. During that time, Minneapolis elected its first woman mayor.

There’s even a handful of women heading major corporations.

But, said Norma Smith Olson, co-publisher of the Minnesota Women’s Press, many of the issues that led to the founding of the publication really aren’t so different from those today.

“How many women are on corporate boards?” she asked. 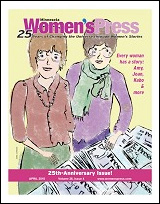 She nodded and pointed to a small article in this month’s issue. The article showed that of the state’s largest 100 companies by revenue, 19 had no women on their boards of directors or among their top executives; 41 had only one woman.

“There still needs to be a place for women’s voices,” said Olson.

There is a perception in many places that older women, those who believe that 25 years ago is just yesterday, are more aggressively feminist than younger women, which would suggest that such publications as the Women’s Press have a graying audience.

“But it’s far more complicated than generational,” said Kathy Magnuson, co-publisher who was in on the first planning stages of the magazine, which last year became a monthly. “We’re being deliberate about building bridges. A lot of older women like to ready the opinions and essays of younger women to see what they’re thinking, and we have younger women reading the things older women are writing to get an appreciation of the opportunities they have.”

Ultimately, both co-publishers say, it’s not the gender-equality stories that build the bridges but  the stories of women told in  women’s voices that matter.

Olson pointed to a story last month by a young Hmong woman, Nou Yang, about her first haircut and why that act was an expression of freedom.

“I wanted the weight off my head. I need a haircut, cutting away my long, dark, wavy hair that hides the oppression of a Hmong girl …”

“That’s a story you won’t see anyplace else,” said Olson. “Many of our readers could read that story and say, ‘I didn’t know that.’ ”

Both publishers say the St. Paul-based publication tries not to be partisan, but it does lean left. As evidence of the tilt, this month’s anniversary edition was jammed with advertisements from DFL pols. There were no ads from Republicans.

Only twice in its history has the publication endorsed a political candidate: In 1994, it endorsed  DFLer Ann Wynia in her unsuccessful U.S. Senate bid against Rod Grams, and in 2008, it endorsed President Obama. (It did not endorse during the primary races between Obama and Hillary Rodham Clinton.)

Still, this is not a blatantly political publication. Now and always, the Women’s Press has been based on the notion that “every woman has a story.”

What is most amazing about Minnesota Women’s Press is that it is not just still here but still growing. It’s a for-profit publication (“though the reason for our existence is not to make money, it’s to survive,” said Magnuson) with a circulation of about 35,000.

Magnuson was among those in a planning group that met often before the first issue ever was printed.

“We had all these questions,” she recalled. “What would we call it? Who would read it? Who would invest in it? Once we launched and that first paper came off the press, we said, ‘Whoa, we did it! Now, we said, we have to hold on for a year. One of our founders [Glenda Martin] said, ‘We have to make it 10 years to make a difference.’ “

There have been tight times, especially in the early years. Like most other small businesses, the Women’s Press has struggled through these hard economic times.

Overall, however, “we’re strong,” said Magnuson. “It’s easier than ever to sell. Advertisers have an awareness that women write 80 percent of the checks in this country; women make the health care decisions in families.”

The publication, put out by a staff of eight people, never will be flush, but the publishers say it’s good to go for another 25 years.