Take a minute to think about the immigrants working in the Twin Cities. What comes to mind? Janitors? Maybe meat processors? How about taxi drivers?

Thousands of immigrants in our midst do such work.

But this may surprise you: Nearly half of the immigrants working in the Minneapolis-St. Paul metro area hold white-collar jobs — doctor, teacher, engineer and business executive, for example.

And contrary to the stereotype of the needy immigrant, they take home relatively high wages, according to new analysis of census data by the Fiscal Policy Institute in New York. [PDF]

The full reality of immigration and its economic impact gets lost in fiery rhetoric over issues like border fences and amnesty.

But now, with immigration reform looming as one of the next big challenges facing Congress, the stakes are too high to allow the debate to be hijacked for the sake of hot-button issues alone. That’s true even for a northern state like Minnesota.

And high-skilled immigrants may be a key to closing partisan gaps in the debate.

A growing, educated and skilled presence
More than 10 percent of the workers in the Minneapolis-St. Paul area between 2006 and 2008 were foreign born — up from 3 percent in 1990, according to the Fiscal Policy Institute’s data. Fifty-seven percent of the immigrants had taken at least some college courses.

A similar pattern held across 14 of the nation’s 25 largest metro areas analyzed by the institute’s researchers. A few cities stood out prominently as home to immigrants doing white-collar work. In Pittsburgh, for example, three-fourths of the immigrants worked in professional and administrative jobs while just 11 percent were blue collar workers.

Occupations of immigrants in the Minneapolis-St. Paul area 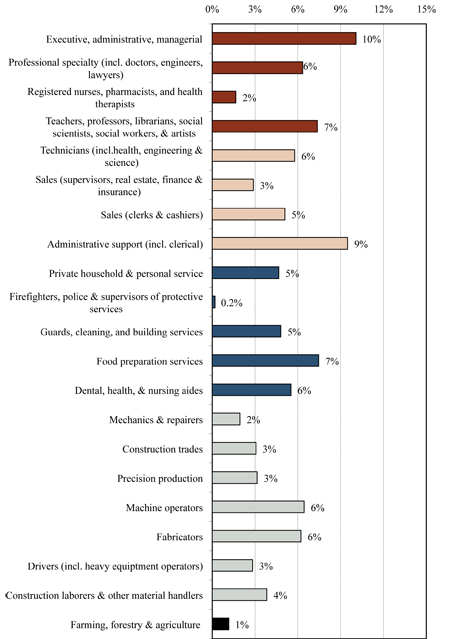 Universe is immigrants 16 years or older, employed in the civilian labor force. Farming, fishing and forestry includes landscaping and gardeners. In the Minneapolis-St. Paul metro area, differences between numbers less than one percent are not statistically significant.

The pattern was different in Dallas, Denver and a few other cities where close to two-thirds of the immigrants did blue-collar or service work. One reason is that booming economies in those cities attract more recently arriving immigrants.

But the nation as a whole — like the Twin Cities — gives a far different picture from what you would expect from political debates in which immigrants often are cast as poor, struggling to hold on at the margins of the workforce.

“The impression that sometimes emerges in public discussions is that immigrants are primarily working in low-skilled jobs, but this broad overview shows that this is far from the case,” said the authors of the report.

Even some illegal immigrants sit in professional offices. While workers who are here illegally were far less likely to hold higher-wage jobs, the report cited data from the Pew Research Center showing that about one in five illegal immigrants do white-collar work.

Job creators in Minnesota
The institute’s analysis builds on a recent study [PDF] done at the University of Minnesota’s Humphrey Institute of Public Affairs. In “The Economic Impact of Immigrants in Minnesota,” professor Katherine Fennelly and graduate student Anne Huart portray immigrants as job creators, not job takers.

Immigrant-owned businesses generated $331 million in net income to Minnesota in the year 2000, the study said. And by several accounts, their presence in the state’s economy has grown dramatically since then.

“Immigrants represented 12 percent of the U.S. population in 2008, but 17 percent of all new business owners,” Fennelly and Huart noted. “In fact, immigrants are almost twice as likely as native-born Americans to start a business.”

The issue of visas
If immigration reform is to serve the nation rather than divide it further, Congress must straighten out problems with visa allocations, making visas easier to get for workers who are needed in both high-skilled and low-skilled jobs, Fennelly said in an interview with MinnPost this week.

“We need reasonable discussions about what is the right number of visas to keep the economy strong in Minnesota and in the nation,” she said.

She acknowledged that isn’t an easy sell in today’s politically charged atmosphere — especially at a time when there aren’t enough jobs to support the families who already are here. Who cares about admitting foreign workers when unemployment is stubbornly high?

Fennelly’s answer is to count the grey hairs in the American workplace and look to the impending retirement of baby boomers.

“The No. 1 demographic characteristic of the United States right now is that we are an aging population,” she said.

That certainly holds true in Minnesota, especially in rural areas. Demographer Tom Gillaspy and the State Economist Tom Stinson have warned repeatedly in recent months that the state faces an economic crisis as today’s highly productive and skilled workers retire in the next few years.

“We need a young workforce, and immigration is a source of that,” Fennelly said.

Clash of interests
The challenge will be to sound that argument loud enough for it to be heard on Capitol Hill, where forces are taking shape for a colossal clash of interests.

Republicans like Arizona Sen. John McCain are hard-pressed at home to crack down on illegal immigration. McCain had been a long-time leader in the push for more comprehensive reform. This week, facing a tough primary battle, he seemed to back away from that position and to focus instead on border security, the capitol newspaper The Hill reported.

For their part, Democrats face different pressure: the need to reassure members of immigrant groups that helped propel them to big victories in 2008. Among other contentious issues, many in those groups are calling for a path to legal residence for otherwise law-abiding immigrants who have been in this country illegally, something many conservatives vociferously oppose.

No question but that the politics of polarization apply. But to write off the chances for any legislation would be to sell short the serious bipartisan concern that has built momentum for reform, said John Keller, executive director of the Immigrant Law Center of Minnesota in St. Paul.

“There is a keen awareness on both sides among people who are thoughtful about this that the status quo isn’t serving the country very well,” Keller said.

Four reform pillars
The best hope for a bipartisan approach rests in a proposal by senators Lindsey Graham, R-S.C., and Charles E. Schumer, D-N.Y. They summarized it this way in the Washington Post:

“Our plan has four pillars: requiring biometric Social Security cards to ensure that illegal workers cannot get jobs; fulfilling and strengthening our commitments on border security and interior enforcement; creating a process for admitting temporary workers; and implementing a tough but fair path to legalization for those already here.”

The recent history is not reassuring, though. Former President George W. Bush pushed for comprehensive reform in 2006 and 2007. He failed.

“The problem now, with Mr. Bush back in Texas, is that the immigration issue is political poison for both parties,” Michael Barone wrote in the Wall Street Journal. He is a senior political analyst for the Washington Examiner and resident fellow at the American Enterprise Institute, a conservative-leaning think tank in Washington.

“Any bill that provides legal status to illegal immigrants leaves Democrats open to the charge that they’re backing ‘amnesty’ and rewarding those who have broken the law,” Barone said. “And vocal Republican opposition to such a bill leaves the GOP open to charges of anti-Hispanic bigotry, with possible backlash at the polls for years to come.”

A bridge to compromise
This is where the skilled immigrants in Minnesota and around the nation come into the debate. Think of them as a bridge to a compromise.

The groundwork for such a compromise was laid in the report of a bipartisan panel assembled by the Brookings Institution and Duke University’s Kenan Institute for Ethics.

The report urges significant reductions in the number of green cards for legal residents’ relatives beyond the nuclear family. Instead, it calls for a sizable increase in the visas issued to high-skill immigrants.

“Family unification should remain a bedrock principle of U.S. immigration policy, but we believe that ‘family’ must be narrowed to mean nuclear family members,” the Brookings/Kenan report said. “We must also recognize that in today’s increasingly competitive and technology-intensive global economy, educated workers with the knowledge and skills to innovate are critical.”

Democrats may get pushback from immigrant groups on that argument, Barone said.

“But a package that provided limited legalization, further strengthened enforcement, and made room for more high-skill immigrants might be the only way to obtain bipartisan support — and could minimize the damage that each party faces from this emotion-laden issue,” he said.