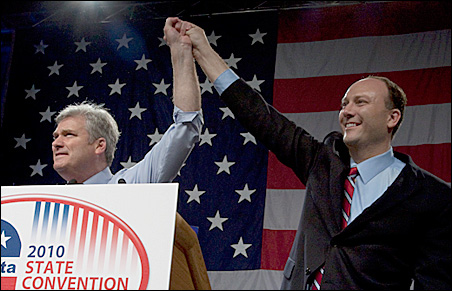 The 2,000 delegates at the Minneapolis Convention Center liked Marty Seifert well enough. But they loved the more electric Emmer.

Seifert, with the outcome clear, conceded after second-ballot results showed Emmer with 56 percent of the vote, just short of the 60 percent needed for endorsement. On the first ballot, Emmer had 53 per cent of the vote, and Seifert, 43.

As the third ballot was being distributed, Seifert went to the podium and told the delegates: “Elect Tom Emmer governor of Minnesota!” His followers responded with chants of “Seifert! Seifert! Seifert”

After bitter campaign, a handshake
A campaign where there often was bitterness between the top two candidates ended with Emmer and Seifert shaking hands, then holding their arms up in triumph.

“Fellow Republicans,” said Emmer, as Seifert stepped off the stage, “it’s imperative we recognize the difference between conventions. This is a class act. Thank you, Marty Seifert.”

Seifert, though only 38, said he will be retiring from the Legislature and heading home to Marshall, “to the town I love and the family I love.”

“It’s been an amazing ride, but this is just the beginning,” he told the cheering crowd.

Laughing at his own angry-guy image, he said both to himself and the crowd, “Remember, you gotta smile more.”

He carries on his sleeve all the angst conservatives have about debt and deficits, big government, federal health care reform and what they see as shrinking liberty.

The huge question, which won’t be resolved until November, is whether these delegates, overwhelmingly white, tending to middle age and older, represent the attitudes of most Minnesotans.

Are people in general — his supporters and those involved in the Tea Party movement in particular — angry?

“Some might be,” Emmer said after the first ballot. “Some are angry, but some are sad, some are genuinely concerned. They don’t know the future. … They’re looking for someone who holds out genuine hope for the future.”

It’s expected that Emmer will face no serious primary competition.

For months, it was believed Emmer was in a neck-and-neck race with Seifert. Entering the convention, there was a belief the endorsement battle might turn into a marathon showdown, equaling the 13-ballot endorsement fight that Gov. Tim Pawlenty and Brian Sullivan waged eight years ago.

But it all came to a stunningly quick end when Emmer won 53 percent of the first ballot vote, far beyond expectations of even his most enthusiastic supporters, who had left the convention hall Thursday night concerned that all the buzz was not enough.

After the first ballot, however, the only question was whether Seifert would concede before a second ballot.

He didn’t give up. Instead, he tried to rally his discouraged troops, getting the word out to his supporters that Gov. Tim Pawlenty had trailed — to Brian Sullivan — after the first ballot as well.

Today’s negative was that in the past Meeks has been a supporter of public financing for professional sports stadiums.

Emmer assured his supporters that “I am not.”

In the first ballot, Emmer won all but two of Minnesota’s congressional districts. (Seifert won in the 1st and 7th districts.)

The Emmer buzz started Thursday, when Sarah Palin endorsed his candidacy. It continued with word that former U.S. Sen. Norm Coleman was working on his behalf and reached a crescendo with his midday nomination speech to the convention prior to the first ballot.

After the first ballot, Emmer noted that the Palin endorsement was hugely popular among most delegates.

“She relates to people beyond party distinction,” said Emmer.

Seifert, however, disagreed with the impact of Palin’s support. He said the work that Coleman and former Minnesota Congressman Vin Weber did on Emmer’s behalf was far more important.

Everything seemed to break right for Emmer.

His staff was elated when it learned that in the draw for speaking order, Emmer came directly after Seifert. (Three other also-rans — Phil Herwig, Leslie Davis and Bill Haas — also were on the ballot but quickly dropped out after the first ballot, with Herwig and Haas tossing their meager support to Seifert.)

Emmer having to follow Seifert on the podium in the nomination portion of the convention couldn’t have worked out better for the eventual winner.

Seifert gave a solid speech, raising the issue of electability.

“It’s not just winning today,” he told the delegates. “We must win in November.”

He was treated to big applause.

‘Angry man’ shows other side
But from the moment a video showed the “cuddly” side of Emmer, who so often is portrayed as an angry man, the crowd was enthralled. The video showed Emmer playing with his kids and joking with his wife, Jacquie, who teased him about being too intense. In the video, she then places a big kiss on his lips.

The delegates loved it.

And they loved it when Sullivan, who placed Emmer’s name in nomination, turned to the crowd and asked, “All those who would like to second the nomination, please stand and signify by saying, ‘Aye!’ ”

More than half of the delegates appeared to stand and roar, “Aye!”

When it was Emmer’s turn to speak, he hit ’em in their hearts the way that Seifert, a less passionate speaker, couldn’t.

“We will look forward to a new style — leadership based on principle and change the culture of government,” Emmer said to huge cheers.

For his part, Seifert had talked about how he had been able to outmaneuver House Speaker Margaret Anderson Kelliher as the minority leader of the House.

That may have sounded like inside politics to this crowd, which is looking for wholesale government change, not little political victories.

Emmer’s speech, though mostly platitudes, was a huge hit with the delegates — and with his 11-year-old son, Billy, one of seven Emmer kids.

At that moment, tough-guy Tom Emmer said he just about “lost it.”

Fortunately, he said, that’s when a fireworks show exploded behind him, which got him “back to normal,” he said, laughing.