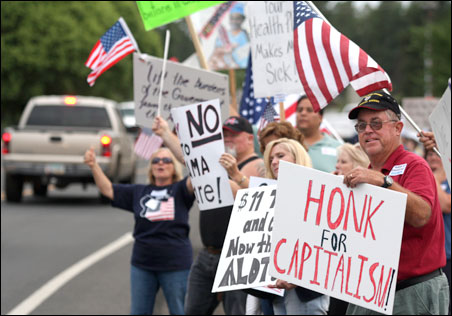 REUTERS/Joshua Lott
Tea Party activists like these in Flagstaff, Ariz., oppose more taxes, but in fact fewer and fewer of us actually pay income taxes.

It’s a safe bet that anti-tax fever will inflame the grassroots, given today’s filing deadlines for federal and Minnesota income taxes.

Expect the heat to persist all year.

For one thing, it’s a high-stakes election year. For another, the energetic “Tea Partiers” are fanning this particular political flame. In one of many scheduled actions, a Minnesota arm of the Tea Party Patriots is organizing a rally  at the state Capitol today.

The truth is, though, that fewer and fewer of us actually pay income taxes, according to data compiled by the Tax Foundation  a conservative-leaning think tank in Washington D.C.

Further, most of us just got a tax cut. But – to the great frustration of the Obama administration – we didn’t seem to notice it. Only 12 percent of those asked in a recent CBS News/New York Times poll  said taxes had decreased. Of those who support the Tea Party, only 2 percent thought taxes had gone down.

Robert Hendin speculated in the Political Hotsheet at CBS News  that one reason the cuts enacted in 2009 got so little notice was because they were relatively puny potatoes.

“Most families saw about $70 more in take home pay every month,” he said. “Individual workers saw about $13 more a week.”

But if you count all of the various tax breaks enacted last year, they touched 98 percent of working Minnesota families, according to data released this week by Rep. Tim Walz, D-Minn.

Those tax breaks include:

Another possible reason so many Americans shrugged off these cuts is that they were confused by raging debate over Obama’s desire to end the Bush-era tax cuts for wealthier families when they expire next year.

It wouldn’t be the first time in American politics that chatter overtook reality.

Whatever the political reality, tax day is upon us again. And some 142 million Americans are expected to file tax returns for 2009 income.

That’s a hefty number. But here’s the interesting twist: Roughly one in three of the filers will be “nonpayers,” according to a report on the Tax Foundation’s research findings.

Thanks to legal deductions and credits, those people will be filing to reclaim every dollar that was withheld from their paychecks last year. And some actually will claim more than they paid because they qualify for the earned income tax credit.

“Nonpaying status used to be a sure sign of poverty or near-poverty, but Congress and the President have changed the tax laws to pull much of the middle class into the growing pool of nonpayers,” Scott Hodge, the Tax Foundation’s president, said in reporting the research.

“The income level at which a typical family of four will owe no income taxes has risen rapidly, now topping $51,000,” he said.

The foundation’s analysis of IRS data for the 2008 tax year shows that a record 51.6 million filers – more than 36 percent of those who filed a return for that year — had no income tax obligation. That’s a sharp departure from historic levels: Between 1950 and 1990, the percentage of tax filers whose entire tax liability was wiped out by deductions and credits averaged 21 percent.

“Since the early 1990s, however, lawmakers have increasingly used the tax code instead of government spending programs to funnel money to groups of people they want to reward,” Hodge said. “Credits have been enacted to subsidize families with children, college students, and purchasers of hybrid cars, just to name a few of the most well known.”

The most significant resulting loss to the federal treasury was the $500 per-child tax credit enacted in 1997. It had been championed by leaders of the Republican takeover of Congress in the 1990s, and ultimately embraced by then-President Bill Clinton too.

The upshot was that by tax year 2008, some 25.3 million filers received $30.7 billion in child tax credits, with more than 18 million of these filers getting $20.5 billion in refundable checks.

Add another $51.6 billion that was refundable under the earned income tax credit. Then toss in billions more that filers saved thanks to the Bush tax cuts in 2001 and 2003.

All of those breaks and more helped erase tax bills for legions of Americans.

When the numbers are totaled for 2009, they’re likely to show as many or more nonpayers than in 2008, Hodge predicted, because of President Obama’s new tax credits targeted at lower- and middle-income taxpayers.

Some other tax watchdogs set the nonpayer tally even higher than last year’s 36 percent. Analysts at the Tax Policy Center  estimate that 45 percent of American households will owe no federal taxes this year.

For all the furor we’ll hear over taxes between now and Election Day, the truth is that politicians have bowed to demands for tax cuts to the point where Hodge sees “serious doubts about ability of the income tax system to continue funding the federal government’s ballooning expenditures.”

Neither party in Washington really wants to open a deep discussion about that prospect.

Meanwhile, some of us still will write checks and line up at the Post Office to mail them today.

Here are a few income and tax facts to ponder while you wait in line:

The Internal Revenue Service expects  to get 2.6 million returns from individuals in Minnesota for the tax year 2009.

The vast majority of the Minnesota returns (more than 1.9 million) will be filed electronically.

Minnesota ranked  11th among states in income per person in 2007. The top states were Connecticut, New Jersey, Massachusetts, New York and Maryland.

Minnesota ranked fifth from the bottom of states in terms of the federal money that flowed back per person in 2008. States that got the most per person were Virginia, Maryland, Alaska, Kentucky and New Mexico.

An inconvenient tax truth: We’ve had plenty of tax cuts