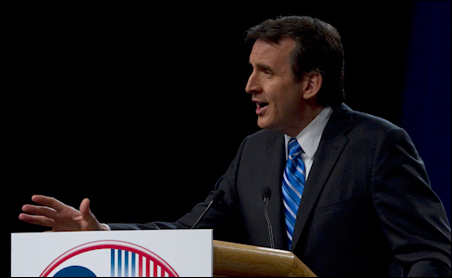 MinnPost photo by Terry Gydesen
Gov. Tim Pawlenty, who spoke today at the Republican State Convention, is at odds — again — with Education Minnesota over a statewide health insurance pool plan.

Sometime Monday afternoon, both houses of the state Legislature are expected to give final approval to the creation of a health insurance pool for all public school employees statewide.

Soon thereafter, Gov. Tim Pawlenty is expected to veto the measure for the third time, even though a state study suggests the move would save nearly $1 billion over the next decade.

While the bill this year enjoys broad bipartisan support, its sponsors, including Sen. Scott Dibble, DFL-Minneapolis, say they don’t think they could garner enough votes to override a veto. “That’s a tall order, for Republicans to stand against the governor,” Dibble said.

Education Minnesota plans to call out the governor in a press conference tentatively scheduled for Tuesday morning. Pawlenty should put his money where his mouth is concerning cost-consciousness, said union President Tom Dooher.

Increasingly ugly skirmish
It’s the latest salvo in an increasingly ugly skirmish between the governor and the state’s largest teachers union, who are at odds over reforms the governor seeks that strike at the heart of teacher job protection. Pawlenty wants to more closely tie teacher pay to student performance, change the teacher tenure system and create alternate paths for teacher certification.

The political impasse last month cost Minnesota a shot at hundreds of millions of dollars in federal Race to the Top grant money and may prevent the state from even applying for the second phase of the Obama administration’s increasingly controversial education stimulus program.

The newest wrinkle centers on a bill the statewide union, Education Minnesota, has lobbied in favor of for three years. For the purposes of buying health insurance, it would put 200,000 school employees and their dependents into a single pool, lowering costs all around. Identical legislation has passed in the 2007 and 2008 legislative sessions, and was vetoed each time, ostensibly because it would raise costs, instead of lowering them.

Last year, in an effort to settle the debate, Rep. Laura Brod, R-New Prague, called for a state Office of Management and Budget study (PDF) to determine the financial impact of creating a pool. Using conservative assumptions, the agency concluded that the measure would save $1 billion over the next 10 years.

The savings projected in the first three years alone — $190 million to districts and $77 million to employees — would far exceed any federal funding Minnesota might qualify for, union officials note.

Pawlenty won’t sign without progress on his education agenda
In a March letter (PDF), Pawlenty wrote to the bill’s main sponsors, Dibble and Rep. Larry Hosch, DFL-St. Joseph. The governor conceded that the move could save costs, but said that absent movement on his reform agenda, he would not sign the bill.

“We cannot consider this bill in a vacuum. It must be viewed in the larger context of the debate on education reform. I have been clear with Education Minnesota and legislators that consideration of the passage of this bill must come with other reform initiatives such as the Teaching Transformation Act, strengthening teacher evaluations, and tenure reform,” Pawlenty wrote. “If this bill comes to me in its current form and without other needed education reforms, it will be vetoed.”

Creating a pool would give small districts greater leverage in negotiating policies and would spread out financial risks. Large, self-insured school districts, such as Anoka-Hennepin, could opt out if they concluded membership wouldn’t benefit them.

Like other employers, school districts are struggling to keep up with rising health care costs. But small districts are particularly at risk. A single employee with a costly health condition can send premiums skyrocketing.

A handful of small, rural districts can no longer afford to offer employee health insurance at all, union officials said. They include Bertha-Hewitt, Blooming Prairie, Houston, Ortonville, Triton, Willow River and Verndale.

Savings seen benefiting district and employees
Teachers and other employees in large districts stand to benefit, too. In many districts, an employee with dependents can expect their share of premiums to be $1,000 a month. Even in Minneapolis, the state’s third-largest district, this essentially puts health care out of reach for an entry-level teacher with kids.

“One of the major roadblocks we encounter in every round of bargaining is the cost of health insurance,” Lynn Nordgren, president of the Minneapolis Federation of Teachers, wrote in a letter (PDF) earlier this week urging lawmakers to pass the bill. “Over the years, the MFT has agreed to reduce the value of our health plan in the hope of keeping premiums down. Even though our members receive lesser benefits, premiums continue to rise by double-digit percentages; this past year the increase was more than 15 percent. If this trend continues, the cost of a family health plan will be more than any of our members can afford.”

Dooher added that the savings would be particularly meaningful to lower-paid school support staff. “I know support professionals who actually pay to go to work because the cost of their health insurance is more than their paycheck,” he said.

Management and Budget would oversee the program, which would offer school employees essentially the same benefits now offered to state employees under the Public Employees Insurance Program.

“School districts now are paying close to $1 billion a year just to provide health insurance to their employees,” Hosch noted in a news release. “This bill provides real reform that will deliver cost savings to school districts, employees and, frankly, the state by providing for a better use of state dollars at the local level.”

In his March letter to lawmakers, Pawlenty said he still was not convinced an insurance pool would lower costs. “The bill will not achieve its goal of reducing health insurance costs for school employees and districts because it does not address the real issues driving health care costs, including an aging employee population, growing prescription drug costs, benefit plan design, utilization rates, high-tech procedures, and the high cost of insuring retirees,” the governor wrote.

Dibble doesn’t buy it. “In back-channel conversations, the governor has signaled no philosophical opposition to health care,” he said. “He is clearly signaling to people above my pay grade and to the union of his desire to have some other things passed.”

Many Minnesota teachers unions have said they support many reforms aimed at closing the academic achievement gap but can’t accept the versions Pawlenty has put forward. The governor, for instance, wants to tie teacher pay to student performance via his unpopular — and underfunded — Q-Comp program. Many other states have fashioned hybrid teacher-evaluation systems that are acceptable to unions and policymakers alike.