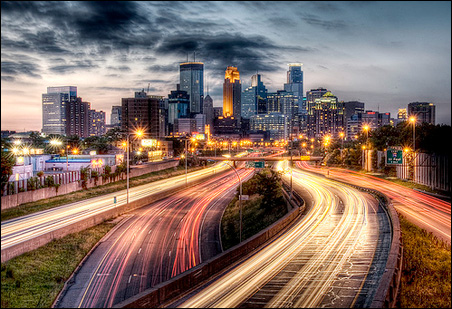 Here’s an upbeat perspective on a subject that’s been far too bleak for far too long: BNET rated Minneapolis among the top 10 American cities in terms of job potential, industry growth and economic resilience.

The website, which specializes in business management issues, says that “future job growth is all about brain power” and that Minneapolis “boasts one of the best-educated populations in the country.”

BNET is not the first to hail the Minneapolis enthusiasm for education. In 2007, researchers at Central Connecticut State University named it America’s most literate city. That study focused on newspaper circulation, number of bookstores, libraries, periodical publishing resources, educational attainment and Internet resources.

St. Paul was third in the literacy ranking, behind second-place Seattle.

Hitting a political target
These studies don’t rise to the demographic precision of the official census.  (I had trouble reconciling BNET’s population and education estimates with the official counts.)

Even so, the studies do hit the larger target. The Bureau of Labor Statistics has shown repeatedly that education pays huge dividends in terms of higher earnings and lower unemployment rates.

Now, the studies also speak to an issue that’s sure to dominate our political discourse for the remainder of this legislative session and beyond to the November election: Minnesota already has slashed support for its public institutions of higher education and borrowed from the K-12 system. Have we reached the point where we are jeopardizing our economic future?

Gubernatorial campaigns already are pushing education and jobs as crucial issues for voters’ choices. BNET ties the two issues together.

Smart grids and piles of data
BNET predicts that the best jobs over the next decade will go “to the cities with the industries and the entrepreneurial incentives in place to support a highly educated, tech-savvy workforce.” Here’s what it means by “best” jobs:

• Health care: Plenty of growth here with the boomers aging.

• R & D: The Bureau of Labor Statistics projects that through 2018 the biggest jump in jobs — 82.8 percent — will be in management, scientific, and technical consulting services.

• Financial planning: Boomers need money advice, and they don’t want to have to get it from Wall Street.

• Consulting: You could get your old job back, sort of.

• Risk management: This could be the new mojo for big financial institutions that want to get government off their backs.

• Data analysis: Google has pushed this work to a new level calling for new skills to handle ever-higher mountains of information and data.

BNET settled on 10 cities where these jobs are most likely to flourish between now and 2018. Besides Minneapolis, the cities are Austin, Dallas, Raleigh, Atlanta, Seattle, Denver, Washington, San Francisco and Santa Ana.

“All are home to notable research institutions; all have solid technology based sectors; six out of 10 are state capitals — if you count Minneapolis, St. Paul’s twin city, and the big kahuna of capitals, Washington D.C. — and each one is a great place to live,” BNET noted.

‘As solidly practical as the Midwest’
The research institutions are an obvious job starter. Bright young people flock to them looking for education, and they often stay in the region to grow entrepreneurial ideas along with careers.

Less obvious is BNET’s cheery twist on the fact of our aging. Retirees like the congenial lifestyle in cities on the Top 10 list, it said. And as boomers retire they will help drive job booms in health care and asset management.

Health care is one of the job-growth areas where BNET predicts Minneapolis will flourish. Some others are education, professional services and leisure and hospitality.

Calling the Minneapolis economy “as solidly practical as the Midwest,” BNET notes that the city’s unemployment rate and housing crisis didn’t reach the same catastrophic levels seen in some other parts of the country during the Great Recession.

Winter weather didn’t factor into BNET’s analysis. As long as we’re being optimists, maybe we can count those icy days as benefits too. What else is there to do in winter but buckle down, work hard and grow the economy?