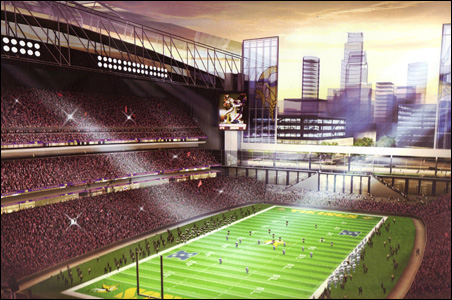 Another breathless Vikings stadium story screamed from the front page of the Star Tribune this morning and on the KSTP-TV airwaves last night.

The contradiction of lawmakers’ intoxication with stadium deal-making is that it’s the public that winds up with the headache and queasy stomach. The reason it took the Twins 15 years to get Target Field built is because democracy works slowly and openly, not behind closed doors.

The ideas floated in these stories — and apparently in scores of behind-the-scenes meetings over the past few months — demand about a zillion questions. But we only have room and time for an unlucky 13 now:

1. Where’s the state’s skin in this game?

The operating principle at the Legislature is often that those who benefit should help to pay. All we hear about in these stories and floated ideas is money from Hennepin County or the city of Minneapolis or a metro-area tax.

The Vikings generate about $20 million a year in taxes, we’re told. According to data the team has generated — data that needs to be analyzed by independent eyes and calculators — the football company produced about $13 million in income and sales taxes … which all go into the state coffers.

If there’s going to be public money, and if the team is a “statewide asset,” why isn’t there state money in this “deal”?

We hear there’s talk of a statewide sports apparel tax in the discussions. It would tax sports fans who buy pro team jerseys and caps, etc. It could raise somewhere north of $15 million a year. That’s a good start. It would probably even have support in Greater Minnesota  . . . unless “no new taxes” is your mantra.

Yes, the Vikings lease expires after the 2011 season. But the Twins played in the Dome for a number of years on a year-to-year basis.

And who in state government is performing thoughtful due diligence on the real possibility of the team moving to Los Angeles? Does the NFL really want a franchise to leave Minnesota? Will other owners “give” Los Angeles to the Wilf family? Are the Wilfs willing to help build a privately funded facility in the Los Angeles suburbs?

Waiting to build anything will cost more in the future — that’s a given. But what’s the Wilfs’ real leverage here? Perhaps the governor’s office should perform some investigation here, and even prepare for any legal spats that might ensue.

This “Los Angeles threat” should be vetted.

One factor, of course, is the state budget, which may look better this session than it will next session. But next session will be conducted under a new governor, who may show more leadership than this governor.

The two political parties’ political conventions are about to be held, later this month and in early May.

Don’t you think this Vikings issue has now been thrown into the mix?

4. How much is this stadium going to really cost?

The Star Tribune story uses a $698 million figure. We’re hearing the conversations have the price as much as $100 million higher? What is it going to cost? Does that include related infrastructure?

We need a solid price before we agree to pay.

5. Where is the stadium going to be located?

Ideally, the core city of Minneapolis is where such large projects should be located.  But is the current Metrodome site really the best place? Is it the highest and best use of the land for city development?

And let’s say the stadium migrates to the suburbs, such as Brooklyn Park, where another site is being examined? What could that mean for the core city?

An idea also being discussed is an increase in hotel taxes in the metro area. Should hotel taxes in St. Paul or even Minneapolis be raised if the Vikings stadium — with a limited number of sizable events — is out in the ‘burbs?

So, why should Hennepin County be on the hook for this? Already, ravenous dealmakers are looking to rob the county’s sales tax increase for the Twins ballpark to help pay for the Vikings stadium.

Target Field has been used for exactly two weeks now, and already someone wants to fiddle with its finance plan? Doesn’t sound wise.

Besides, legislators, read our lips: if you want a Vikings stadium funded by the Hennepin County Board, you better whip up four votes. And good luck.

And dare we say that Target Center, the aging arena that the city owns, already contributes mightily to that tax downtown. Will the Vikings “deal” include some opportunity for the city to pay down its Target Center debt?

8. What about the $10 million cap on Minneapolis sports facilities funding?

In 1997, the voters of Minneapolis said that any city contributions that exceed $10 million to a sports facility must be approved by a referendum. How does that affect — if at all — any effort to use Convention Center money to fund a Vikings stadium?

9. Where are the “social responsibility” pieces of any deal?

Affordable tickets? Commitment to public transit? (If it’s at the Dome site, LRT is already in place.) Commitment to no TV blackouts? Affirmative action for the work force?

In today’s Pioneer Press, there is a troubling story about cuts in junior high school sports. For the moment, let’s set aside all the other needs in the state. (For a moment.) And just focus on sports. Do we want a community in which we are whipping up a $700 million to $1 billion pro football stadium deal, but in which we can’t afford to cover the costs of junior high sports for boys and girls who really need it?

10. Tell us again: How will this stadium be used year-round?

OK, we have 10 Vikings games. And a Super Bowl once in the life of the facility, maybe. And some NCAA basketball tournaments every few years. Then what? What will this be used for, and who will manage the building? And who will capture revenues from non-football events?

How much might events in the new Vikings stadium cannibalize events at the Minneapolis Convention Center or TCF Bank Stadium or Target Field or the two arenas? And tell us again: how many $200,000 suites can the Vikings sell? And what will the 7,000 or so expensive club seats cost? And can this community afford it?

Maybe we can, but we haven’t seen a market survey report from the team yet. Before any public money is used, we need to know how sustainable this facility will be.

We hear “one-third.” But that contribution has long been based on a three-legged stool: one-third team, one-third “local partner,” one-third state.

So far, the state’s leg hasn’t shown up and Gov. Tim Pawlenty has suggested it won’t show up in any state taxes. The natural “local partners” — the cities of St. Paul and Minneapolis and Hennepin County — are already tapped out because of state cuts.

The Twins are in for about 36 percent on Target Field, and paid for cost additions. The Wilfs need to open their checkbooks more.

12. Does the public get a piece of the action?

There’s a clause in capturing the “upside” of any Twins’ sale. Will that be part of any Vikings’ public contract?

13. Are the Vikings worth retaining as a business and cultural asset in Minnesota?

Any more questions? We would assume so.

New Vikings stadium: About a zillion questions to be asked, but we only have room for 13