You might not have ever considered it, but there aren’t too many places in a courtroom where a sketch artist can see the faces of the defendant, the lawyers, the jurors and witnesses. Most of the time, they’re looking away from the onlookers at the judge.

An amateur sketch artist — and let’s face it, these days California condors outnumber the pros — resolves this conundrum by going armed with pictures of everyone who will appear at trial. This is why when you see a courtroom sketch on TV often the people either lack facial features or look exactly, precisely the way they do in their mug shots even though they are on the witness stand.

Meet Ken Avidor, comic book artist by trade, rabble-rouser by avocation and perhaps the only man in the Twin Cities right now who knows how to get around this. Avidor has drawn nearly every moment of the over-the-top drama in Ponzi schemer Tom Petters’ trial — including Thursday’s sentencing — from a spot about a third of the way into the second row on the left side of the courtroom, right behind the FBI agents and postal inspectors and other investigators who make up the prosecution’s bullpen.

A choice viewing spot
It’s the one vantage in U.S. District Court Judge Richard H. Kyle’s downtown St. Paul courtroom where one can see Petters, Kyle, the witness and the attorney doing the questioning, and Avidor got in the habit of getting to the courthouse early to make sure it was his.

On any given day, the trial attracted dozens of gawkers; most ended up in an overflow room where they could see only a static view piped in on closed-circuit TV.

In December, Petters, whose empire included Polaroid, Sun Country Airlines, and Fingerhut, was convicted of swindling investors out of $3.5 billion. Over the course of his month-long trial, witnesses testified that the flamboyant Minnetonka entrepreneur sought constant infusions of cash from hedge funds and individual investors, supposedly to finance deals involving high-end consumer electronics. On the stand, half a dozen former associates described forging documents, making up cover stories and faking transactions to keep the scheme from being uncovered.

Much in the way politicians enjoy it when talk show hosts do a good job skewering them, Avidor’s work earned him a kind of cult status among the lawyers, law enforcement agents, reporters and others who sat through the trial with him. He’s got YouTube followers, email correspondents who nominate courthouse staffers needing immortalization and unsolicited help making sure the infrequent competition doesn’t encroach on his prime perch. 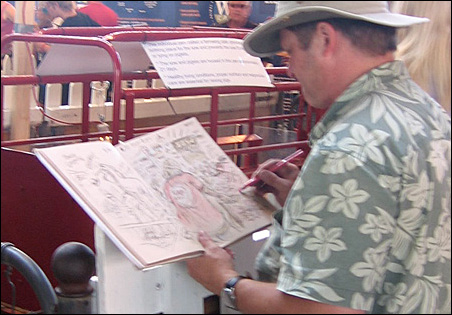 Avidor sold a number of drawings to KSTP during last fall’s trial, reminding TV viewers that original sketches were once a de rigueur aspect of courthouse news. His best work, however, was featured on City Pages’ news blog and on his own blogs. At home in southwest Minneapolis at night after each day of the trial, Avidor would create a montage of his best sketches and narrate the testimony they depicted. His deadpan delivery only rendered the trial’s dramatic twists more absurd.

When testimony wrapped up just before Thanksgiving, Avidor was there day after day, waiting with the press corps as the jury deliberated for more than a week. During the verdict vigil, he sketched the room where the reporters killed time, the heavy equipment digging up the streets outside the courthouse in preparation for light rail’s arrival in St. Paul, and finished some of the character studies in his notebook.

He even produced Petters trading cards
He turned the best into dead-on trading cards, which he passed out at the courthouse. The stylized image of Petters’ longtime girlfriend, Tracy Mixon, sports tall boots and a short skirt. Larry Reynolds, a co-conspirator who turned out to be in the witness protection program, glowers like a big-boned thug. Ponzi scheme victim Dean Vlahos, former owner of the Redstone Grill, looks astonished. 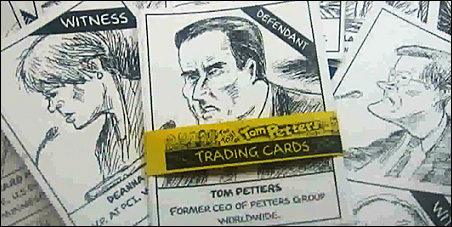 Avidor has strong opinions about the kinds of images that best convey the way the drama in a criminal trial unfolds. Lawyers pointing at a witness or the defendant are clearly laying blame, for instance.

“The attorneys get up and jump up and down and say, ‘I object,’ and things,” he explained. (Petters’ attorney Paul Engh is particularly given to underscoring his points in this way, and made frequent appearances in Avidor’s oeuvre.)

From an artistic standpoint, Petters intimate and master forger Bob White was Avidor’s favorite witness because of his hard-bitten, wizened appearance. “His weary gestures? That’s what I love,” Avidor explained. “He was just a joy to draw.”

Avidor might think his portraits of White are his best trial sketches, but attendees are still cackling over the illustrations he did on Day 16 of the trial, when Petters, who had taken the stand in his own defense, was forced to admit that he had sex in Italy in a gondola with his assistant Deanna Coleman. (The whistleblower whose confession launched the case, Coleman took the stand day after day while prosecutors played damning recordings she made at the FBI’s request.)

Petters obsession came in round-about way
Bizarrely enough, Avidor’s interest in Petters stems from a longstanding obsession with something called personal rapid transit, or PRT. A controversial, untested alternative to light rail, PRT has counted such strange political bedfellows as former Minneapolis City Council Member Dean Zimmerman and Rep. Michele Bachmann. Transportation is one of the many things Avidor has strong opinions about, and he quickly became the blogosphere’s leading PRT critic. 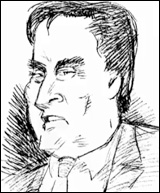 In 2006, when Zimmerman went on trial for bribery, Avidor attended with notebook in hand and discovered he liked courtroom sketching.

About the same time, Bachmann was elected to the U.S. House of Representatives. Avidor and seven other political agitators launched a blog called Dump Bachmann. Three weeks after Petters was arrested, the St. Cloud Times reported that a year earlier, Bachmann had asked George Bush to pardon a contributor of hers by the name of Frank Vennes Jr.

Hoping to learn more about Vennes, Avidor started attending hearings in the Petters case and quickly found himself hooked. “It was a real story about what was going on in the economy and about the bizarre zeitgeist of Ponzis and bubbles,” said Avidor. “It was Ponzipalooza, and it was just fascinating to see it dissected right there in the courtroom.

Thursday’s sentencing was scheduled to start at 9 a.m. sharp, but Avidor was there an hour early. While he waited, he tried a couple of studies of Kyle’s clerk and fretted about how long the sentencing would take. If the judge simply handed down a sentence, he wouldn’t have enough time to turn out fresh renderings of the entire cast. 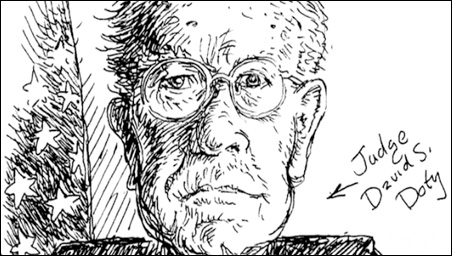 Lucky for Avidor, Kyle had set aside more than an hour to hear the attorneys on both sides press their cases for how Petters should be sentenced. While defense attorney Engh pleaded for leniency, Avidor sketched an anxious Petters, forehead in hand, and took particular pains to get Petters’ rakish hairline just right. He’d brought a new orange pencil in case Petters appeared in prison scrubs, and winced in disappointment when the fraudster appeared in a gray suit.

Using a Rotring fountain pen and colored pencils, Avidor drew several detailed sketches on a large pad of paper, stopping occasionally to write down snippets of testimony on index cards. Later, he would copy the best lines into dialogue bubbles in a notebook where he did most of his drawing.

What more might become of the graphic novel? Maybe nothing. Or maybe, just maybe, an Internet-era Renaissance in the art of the courtroom sketch.