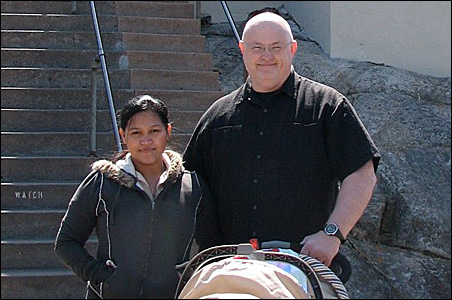 MinnPost photo by Joe Kimball
Scott and Shalimar Crocker felt the pull of the lighthouse as they drove along the North Shore this spring.

TWO HARBORS, MINN. — Scott and Shalimar Crocker got a jump on the summer crowds at the Split Rock Lighthouse: They came up to the North Shore from the Twin Cities on a recent sunny Sunday for a day of sightseeing in the unseasonably warm April weather.

The Crockers and their 3-month-old daughter, Destiny, were among dozens of folks who made the trek that day to the popular state park/tourist attraction about 45 miles north of Duluth. The restored lighthouse building and the nearby keepers’ houses weren’t open yet for tours; they’re summer-season attractions. But the visitor center is open limited hours year ’round, and there are plenty of hiking and photo opportunities.

Starting May 15, though, the place will be hopping, even more so than usual this summer because it’s the 100th anniversary of the lighthouse opening, and the Minnesota Historical Society — which now operates the lighthouse site as a historical center — has big plans.

Normally, the beacon is lit sporadically during the summer months because the Coast Guard won’t permit regular lightings. Apparently they’re worried that it will confuse some of those seasoned Great Lakes captains making their way to Duluth.

But this year they have permission for somewhat regular lightings to commemorate the anniversary: the first Friday of each month — May through November — will bring special presentations and concerts at the site, along with special lightings of the beacon.

Built after the big 1905 storm
The lighthouse was built as a government response to the 1905 November storm that ravaged Lake Superior and killed 30 sailors.

One of those killed was aboard the Madeira, a schooner-barge that went down near Split Rock. The crew was able to abandoned ship when a seaman climbed up the cliff and threw a rope to the others. One man, though, was washed away when the barge split in two.

Curt Brown, a reporter for the Star Tribune, covers the storm and its aftermath in his book, “So Terrible a Storm: A Tale of Fury on Lake Superior.”

He contends — with, he says, some factual basis — that building the lighthouse was a “knee-jerk reaction” to the storm’s toll, an example of how the shipping interests demanded that Congress take action to make sure such a thing never happened again. 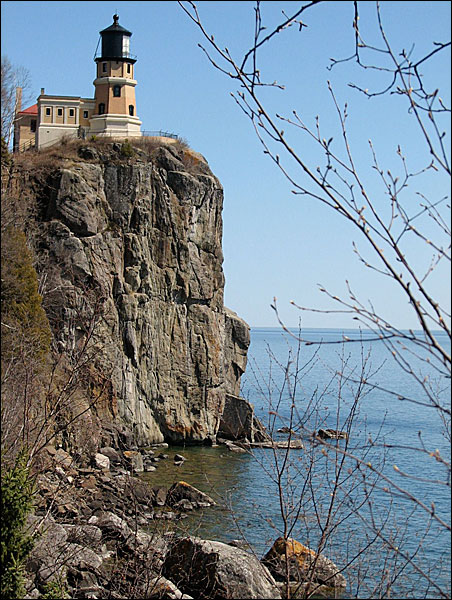 Brown said he’s not sure that all historians and experts agree with him, but following a commissioner investigation of the storm, there was a dissenting opinion noting that the lighthouse was unnecessary.

His book cites a report to the Lighthouse Board in Washington:

“It is not … obvious what service a light at Split Rock can perform.”

The report suggested that in clear weather, a lighthouse was unneeded for the 45 miles from Devil’s Island in the Apostles to the foghorn and light-equipped port in Two Harbors. During thick weather the light at Two Harbors alerted captains to the coastline and the adjoining fog whistle “is amply sufficient for the guidance of vessels.”

But the report went on to say:

“Of greater importance than the number of wrecks is, however, the fact that [in] the absence of a fog signal at Split Rock, vessels are greatly delayed in making Two Harbors, and because of the large number of vessels involved, the money loss due to this delay must be very considerable.”

Harry Coulby, the union busting president of the Pittsburgh Steamship Company and the Lake Carriers Association, had no interest in delays. Knute Nelson carried the bill in the U.S. Senate and Theodore E. Burton of Cleveland led the charge in the U.S. House. By March 2007, less than two years after the great storm of 1905, Congress forked out the $75,000 for Split Rock, part of a half-million of lighthouse money for the Great Lakes.

Brown said some sources believe it’s likely that even if the lighthouse had been there during that storm, it wouldn’t have saved the ships.

“But the lighthouse sure has become an icon,” Brown said in an interview. “And there have been no shipwrecks in the area since it was built. You can’t argue with that.”

State documents say the fog signal building and lighthouse were actually completed in 1909 but not commissioned until a year later. Hence this year’s official anniversary.

There are three houses on the site where the lighthouse keepers lived. The 370,000-candlepower beacon operated for 59 years, alerting ships of the rocky North Shore. In 1971, the federal government deeded the lighthouse station to the State of Minnesota to be operated as a historic site. In 1976, the Minnesota Historical Society began operating the site.

A popular spot, with 117,000 visitors in ’09
Split Rock has grown to be a major tourist attraction along the North Shore, with more than 117,000 visitors last year, according to assistant site manager Terry Tobey.

The sunken Madeira, not far off shore, is a popular scuba diving spot, and the lighthouse itself, perched high on the rocky cliffs, is one of the most photographed lighthouses in the country. A map available at the visitor center shows seven distinct spots for photos, all accessible via trails.

In nearby Two Harbors — which has its own lighthouse that’s open for tours — merchants are happy for the steady stream of tourists heading north to Split Rock.

“The main question we get is: Where’s the lighthouse?” said Michelle Rittierodt, supervisor of the information center in Two Harbors.

And because of the centennial anniversary, Split Rock is getting more attention: It’s on the cover an Explore Minnesota brochure, and is featured on the Two Harbors Chamber of Commerce publication, Rittierodt said.

She’s not sure, though, that the anniversary events will bring a lot of additional people up the North Shore. That’s because it’s already such a popular attraction, she said.

For folks like the Crockers, the lighthouse is one of those destinations on the North Shore that pulls you in.

“I was here, maybe 30 years ago, when I was a kid, but I really don’t remember much,” Scott Crocker said. “Today when we were driving up we saw it from the road and now, here we are.”

Shalimar Crocker had never seen Split Rock before and after a quick walk around declared: “It’s very nice.”

One caveat: roadwork ahead
A one-word warning to summertime visitors to the North Shore: construction.

There’s major work on I-35 in Duluth coming this summer, and several projects on Hwy. 61 north of Duluth are scheduled, including work near Split Rock.

State officials say: “Traffic delays and noise can be expected, so please plan accordingly. Visit the Minnesota Department of Transportation website for details about the construction schedule, travel information and safety tips. We apologize for any inconvenience you experience during this important highway improvement project.”

Joe Kimball reports on a variety of subjects, including politics, St. Paul and Greater Minnesota.

In addition to the usual tours, hikes and photo opportunities this summer, there are special presentations and concerts at Split Rock on the first Friday of each month, May through November.

Tickets are required, and are only available online. www.mnhs.org/firstfridays/

Bill and Kate Isles, An Evening of Music at Split Rock

Thom Holden, The Witch of November: Tales of Two Storms